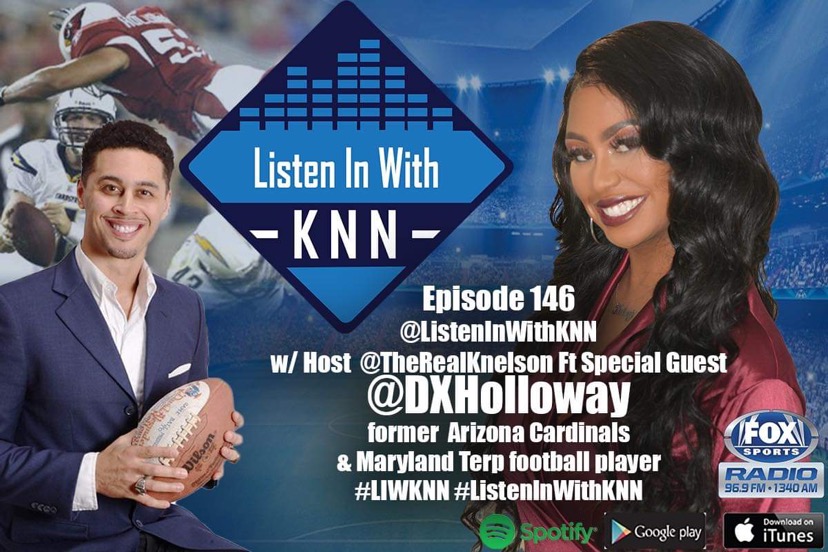 On the 146th episode of Listen In With KNN on Fox Sports 1340AM, host Kelsey Nicole Nelson welcomed former University of Maryland and Arizona Cardinals football player David Holloway to the show.

Speaking of his athletic career, he’s a third generation professional athlete. His father, Brian Holloway was a five-time All-Pro offensive lineman for the New England Patriots and Los Angeles Raiders. His grandfather, John McKenzie played 13 seasons in the National Hockey League most notably with the Boston Bruins where he won two Stanley Cup titles. Despite growing up around sports, it was something that came natural to the younger Holloway.

“It was always follow what your dreams are but whatever it is, do it big. The turning point was I felt like in football, there was just something more you could do and you can physically hit somebody. I could be more of myself and that’s why I chose football,” Holloway said. “What got instilled in me is to have a big vision and never stop believing in yourself. Another thing is common sense isn’t always common practice.”

Growing up, Holloway was raised to seek mentors and teachers that would help him get better everyday. He’s been blessed to be around a lot of people in his life to let him know what goes on behind the scenes. As a result, Holloway is giving back through his foundation to educate the next generation.

“I have some level of expertise from so many people who took their time, love, energy and invested in me. So you’re really getting a lot of people coming through me,” he said.

When adversity hits, Holloway always looks for the positives. When COVID-19 occurred, his first thoughts were, ‘they are rougher but I’m still the captain of the ship’.

“So I focus on the things I can control. I spent thousands of dollars on everything from speed reading to master communication classes to interviewing some of the brightest people that I’m connected to to what’s really going on in the frontlines,” he said.

College Football has taken some hits due to COVID-19 as some conferences such as the Big Ten and Pac-12 cancelled their football seasons. Holloway sympathizes with the football players as he was a college player at the University of Maryland but sees the other side as well..

“There is no right or wrong answer. I’d be for the athletes to come back and try to play because that’s just in my gut and if I were in their shoes, I would say ‘let’s get back out there.’ As an athlete, you have a timeclock. When you’re young in a sport, you have tons of energy and you heal fast,” he said. “For some people, this is going to really affect their career. If I had to be on one side, maybe it’d be 51-49 percent going back. Do it the smart way and let’s get people back out there and let’s lead by example.”