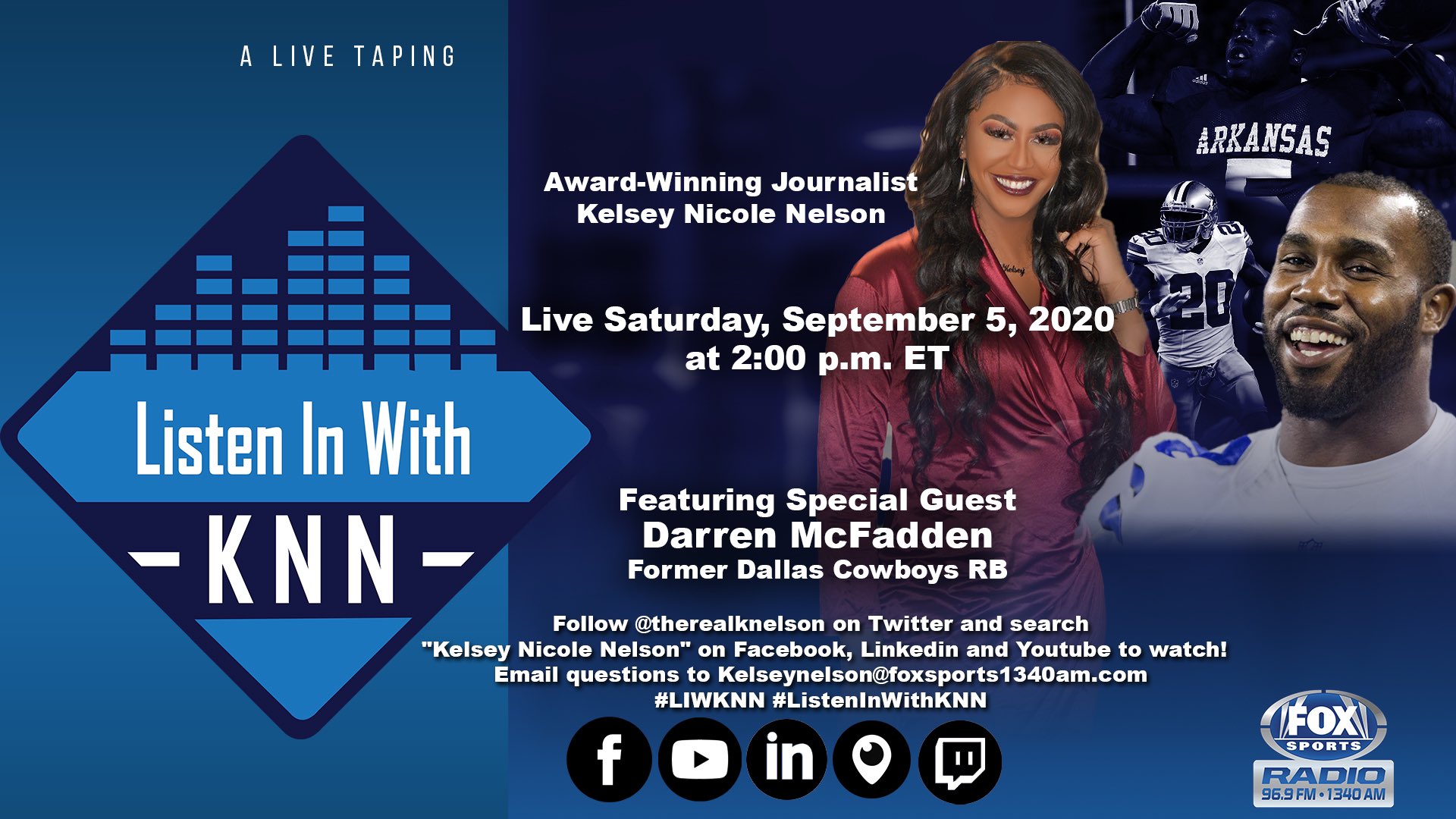 On the latest episode of Listen In With KNN on Fox Sports 1340AM, host Kelsey Nicole Nelson welcomed former University of Arkansas and NFL running back Darren McFadden to the show.

Growing up in Little Rock, Arkansas, he was raised by his 11 brothers and sisters. During that time, hMcFadden had a dream of wanting to play football at the University of Arkansas. His dream came true when he played for the Razorbacks from 2005 to 2007 where he was a two-time Southeastern Conference (SEC) Offensive Player of the Year and Consensus All-American.

“Setting all the rushing records and walking away with some accolades is amazing. Just putting that Razorback on my helmet is one of the things I’m very proud of. I’m a team guy and so I can’t take anything away from the team,” McFadden said. “I had a lot of great players with me to help me get to where I was.”

Speaking of the Razorbacks, the SEC announced that they will play college football for the 2020 season and the Little Rock native has high hopes for his alma mater this season.

“Being a Razorbacks fan, I would love to see them win a national championship. As far as the SEC playing ball, I’ve talked with people at the University of Arkansas and they’ve been doing a great job as far as taking care of everything they’re supposed to do and follow the guidelines, he said. “The one thing about this conference is it’s a very strong conference and everybody takes pride in it.”

McFadden advises college football players this season to prepare with or without football.

“You never know if the season is gonna go on or if you have to skip this season and try to go in the NFL. Either way, you have to try to be prepared.”

After his college career ended, he put his name in the 2008 NFL Draft where he was selected by the Oakland Raiders with the fourth overall pick. McFadden spent 10 seasons in the league with the Raiders and the Dallas Cowboys racking up two 1,000 yard rushing seasons in the process. He had some of his best memories in his seven years in Oakland as they are now in Las Vegas.

“Playing with some of my best friends I still talk to this day like Tyvon Branch, Taiwan Jones, Marcel Reese, Khalif Barnes, Michael Huff and Justin Fargas. Those are all guys I played with the Raiders,” he said. “I definitely love the Raiders and I’m excited about their move to Las Vegas. I hate it for the city of Oakland because I know how much they love the Raiders but it was time for them to get a new stadium.”

Speaking as a former running back, McFadden’s top four in the game are Ezekiel Elliott, Christian McCaffery, Derrick Henry and Saquon Barkley. Additionally, Adrian Peterson and Frank Gore are on his list of greats that have stepped on the gridiron.