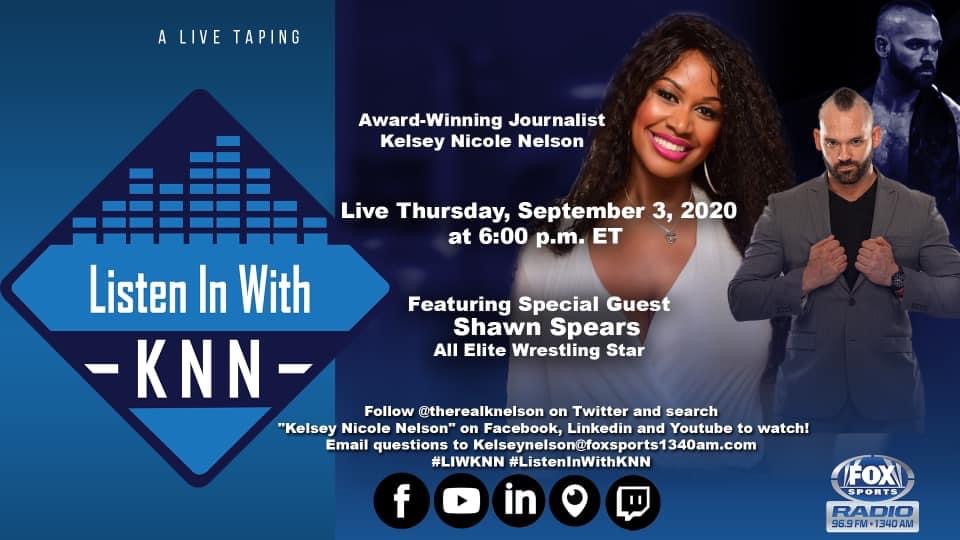 On the latest episode of Listen In With KNN on Fox Sports 1340AM, host Kelsey Nicole Nelson welcomed All Elite Wrestling Star Shawn Spears to the show.

Speaking of his journey, he grew up playing hockey in Canada but had dreams of getting into professional wrestling. His favorite wrestlers growing up were Rick Rude, Rick Martel and Mr. Perfect.

“If you meet the right people, do things the right way, stay professional and be an overall good person in life, then good things can happen if you put in the work. It’s just about putting your nose to the ground and grinding for however long it takes. At the end of the day, I have been very fortunate as a kid from Canada coming from a town of 130,000 people to get where I am now,” Spears said.

He had two stints in the WWE from 2006 to 2009 and 2013 to 2019 as a Development Wrestler. During that time, Spears met a talented wrestler named Peyton Royce, who later became his wife. Both of them are fans of professional wrestling no matter where they work.

“She was very supportive of all the decisions I made. She said, ‘I don’t care what you do or where you work as long as you come to the door happy.’ Wrestling is what we do but is not all of who we are,” he said.

Then, Spears would take his talents to a new wrestling company called All Elite Wrestling (AEW). In October 2019, AEW debuted a weekly TV show called AEW Dynamite that airs every Wednesday at 8pm ET on TNT which talks of the wrestling business. For Spears, the biggest difference between AEW and WWE is how upbeat the atmosphere is.

“The common goal is the same and that’s to put on the best possible show for our audience. The thing about AEW is it’s on you to succeed and you have to be on point and on your mark in what you’re trying to present to your audience, good, bad or indifferent. We’re turning the wrestling world upside down and that was AEW’s goal from the very beginning,” he said.

It’s also the goal of CEO Tony Khan and the people he’s brought on board. What Spears appreciates about Khan is how involved he is.

“He’s more knowledgeable about wrestling than I am and I’ve been in it for almost 19 years. He remembers everything and is a fan like all the rest of us. That’s the reason I got into it and that’s the reason he’s now into it,” he said. “That in itself is inspiring to everybody else that works for him.”

When looking back at his career, Spears wants to be remembered for loving the sport.

“I believed in me and believed that I have a place in this industry. By the time I’m done with it, I’m hoping that I gave more than I took. Anybody who would say anything good about me, I hope that I was able to contribute more to the world of professional wrestling and impact people’s lives more so than I gained from it.”