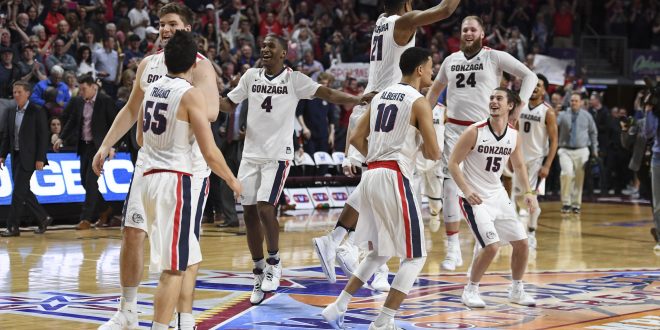 No 16-seeded team has never beaten a one-seed, and Gonzaga Bulldogs made sure of that defeating South Dakota State Jackrabbits in the first round NCAA West Regional in Salt Lake City, 66-46.

South Dakota State flopped in the second half not connecting on shots. Mike Daum was shut down throughout the game. Daum, nation’s second-leading scorer, only scored 17 when he averages 25 points a game missing nine of his 16 attempts. The Jackrabbits shot 31 percent in the loss and was outscored 40-24 in the second.

Gonzaga Bulldogs relied on the three and it showed shooting 26.7 percent from behind the arc. Guard Jordan Matthews and Josh Perkins combined for nine three-pointers off 18 attempts. Matthews finished with 16 points, five rebounds, and one assist. Przemek Karnowski finally got in on the mix in the second half with 10 points and three rebounds. Karnowski was held to just four points 32 minutes into the game by Daum.

The first half was more of the Jackrabbits bouncing around making the Bulldogs chase them. Their defense was in sync keeping Gonzaga on their toes and a close game intact. The Bulldogs couldn’t connect on three-pointers going two for 14 in the first. These missed jumpers cost them early on, while South Dakota State continued to lead.

The Bulldogs finally took over the lead with a little under two minutes to go before halftime. Forward Zach Collins made the layup for the lead off an assist from guard Nigel Williams-Goss. Two free throws from Collins and one from Matthews gave Gonzaga the 26-22 halftime lead. From that point on Gonzaga never let up clutching the lead and making the Jackrabbits eat their dust.

The Bulldogs will await the winner of the (8) Northwestern and (9) Vanderbilt Thursday afternoon game.