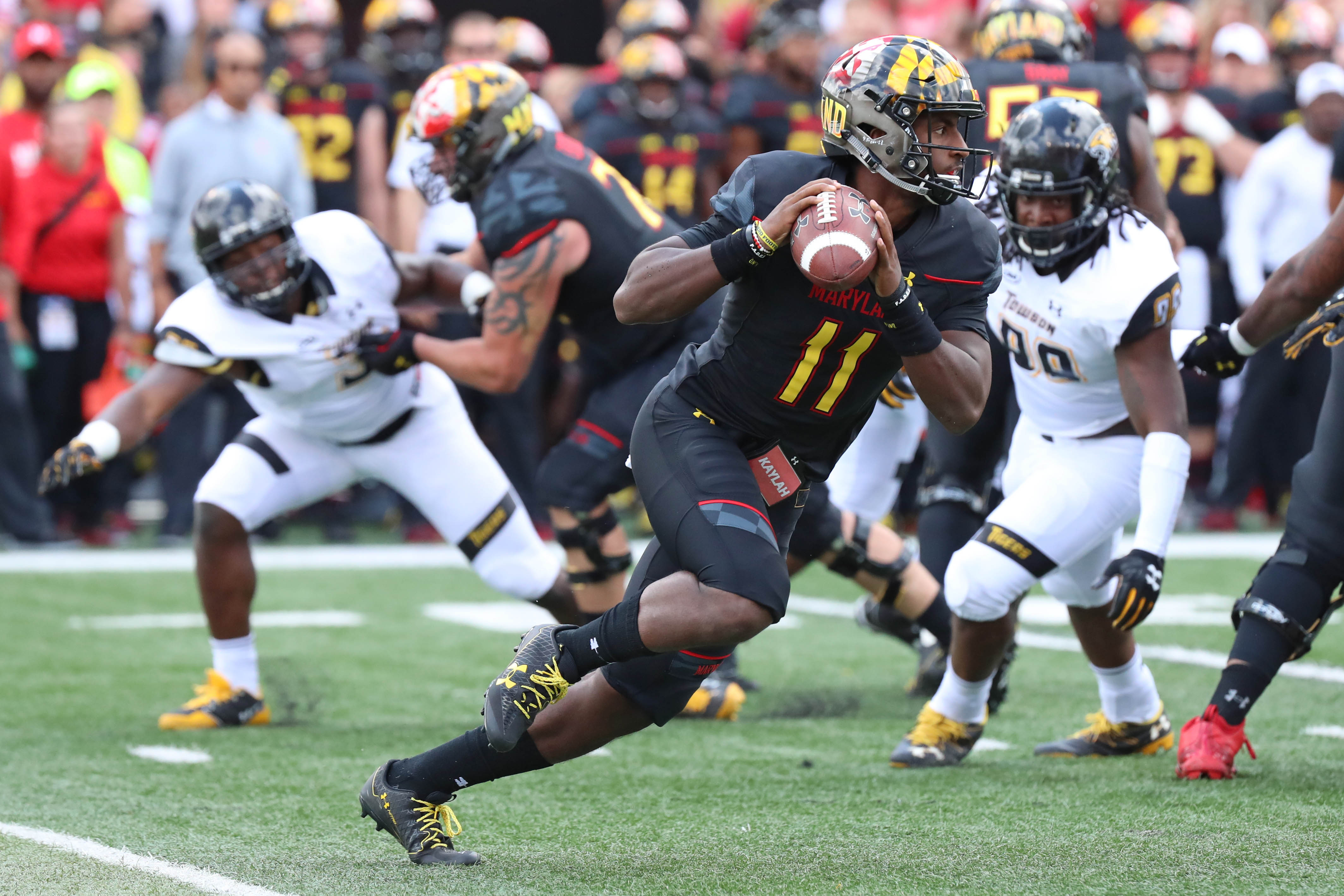 Both the Maryland Terrapins (1-0) and Towson Tigers (1-0) began their respective seasons with a win. However, just one victor would arise from the battle between the two teams in the University of Maryland school system.

COLLEGE PARK, Md. — The Terps began the game with the ball after Towson elected to defer. Maryland return man Avery Edwards would take the ball up to the Terps 38-yard line. From there, the Terps would drive down the field in 2:46 to score a touchdown. Freshman quarterback Kasim Hill made a toss to D.J. Moore for his first career passing touchdown.

The Terps would get the ball back on a punt and drove down the field once again. Hill struck Moore on a 34-yard touchdown pass at the 8:32 mark. Maryland got the ball back from Towson and scored on a 74-yard run from running back Ty Johnson.

In the second quarter, Towson would answer with a Jabari Allen 10-yard touchdown grab from Ryan Stover, putting the score at 28-7 Maryland. The Terps were able to pick off Stover at the 5:46 mark. This particular interception was returned for a 75-yard touchdown by defensive back Darnell Savage. At the half, Maryland led 35-7.

Johnson would dash into the end zone in the 3rd quarter on a 46-yard run. Maryland would score two more touchdowns during the third quarter, first on a 25-yard run from running back Jake Funk and a 21-yard rush from Moore, putting Maryland up 49-7.

With the blowout looming, the Terps were able to get backup quarterback Max Bortenschlager into the game. He produced a rushing touchdown from one yard out of the end zone with 13:26 remaining in the game. Stover passed for his second touchdown on a 59-yard strike to Rodney Dorsey with 10:41 remaining, Maryland leading 56-14.

Each team would score one more time. Maryland running back Javon Leake had a 61-yard rush for a touchdown with 8:46 remaining in the game. Towson kicker Aidan O’Neil would boot a 49-yard field goal with :28 left in the game. The final score was 63-17.

Hill started his career going 11-11 on passes. He also had his first two touchdown passes of his career.

D.J. Durkin began with an opening statement, addressing the media after the game.

“It was a good win for us. We came out and really started the way we wanted to,” Durkin started. “We had good momentum right from the start. I thought Kasim [Hill] did a great job taking the team down the field on that first drive and making good decisions with the ball. We wanted to come out and get some good throws in with him and he certainly did that. There were a lot of big plays on offense.

There were a lot of big plays and those guys did a good job with Ty [Johnson], D.J. [Moore], Taivon [Jacobs], and Kasim [Hill]. I was very pleased with that. The defense did a lot of things well, a couple moments, a couple drives we’d like to have back.  All in all we got a chance to get some guys some reps that will help us move forward in the long run. Happy with our team and the way they came out.

They really had the right mindset for this game. Come out and start fast and we were able to do that. We’re 2-0 with a bye early in the season, not many byes usually in week three, but that’s what it is. We have to improve with UCF coming here in a couple weeks. We know they’re an extremely talented team so we’re going to have play our best game so far to get to 3-0.”

Durkin was very pleased with Hill’s play at the quarterback position.

“He was 13-for-16. Very efficient. 163 yards [passing] I thought was really good,” said Durkin after the game. “How the game was going got us out of some few things in terms of throwing the ball, but I thought he was really good. A lot of those passes were run/pass type options where he has to make a decision and a read and he made the right ones. I thought he did a great job, especially for his first ever start.”