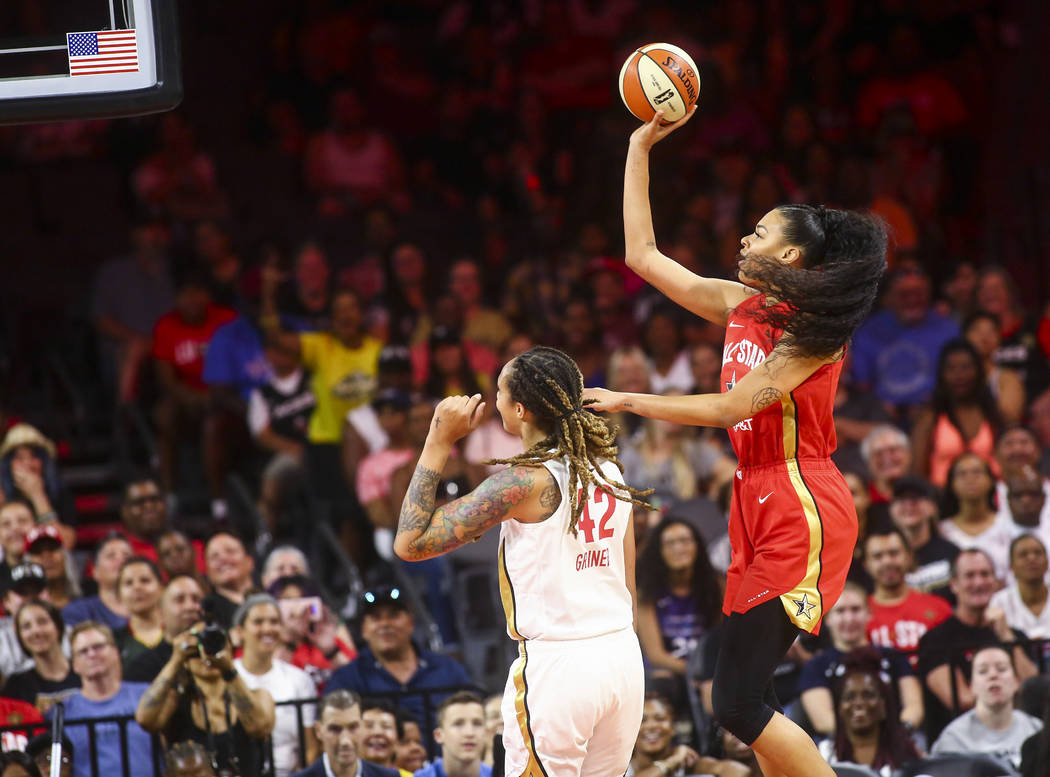 All-Star Weekend is finally here as teams are picked and ready to go for the Saturday night Team Delle Donne versus Team Wilson matchup. The Washington Mystics are well represented this year with Elena Delle Donne as captain of her team coached by Mystics Head Coach Mike Thibault and teammate Kristi Toliver.

The teams drafted by captains Elena Delle Donne and A’ja Wilson will tip-off Saturday, July 27 at 3:30 pm ET, televised on ABC at the Mandalay Bay Events Center in Las Vegas.

For the second year in a row, the WNBA followed its new format for picking teams in the Verizon WNBA All-Star game in an effort to try to appeal to fans. Rather than the traditional Eastern Conference versus Western Conference game we saw for 14 years, the league allowed fans to once again vote for the all-stars and the top two vote-getters were picked as captains to draft their teams.

In her sixth All-Star game in her seven WNBA seasons, Mystics forward Elena Delle Donne, earned the highest amount of votes this year allowing her to pick first in the draft and pick whether her team would wear home or away colors.

Team Delle Donne is headlined by bigs Brittney Griner of the Phoenix Mercury and Jonquel Jones of the Connecticut Sun, Seattle Storm’s Jewell Loyd, and sharpshooter Kia Nurse of the New York Liberty. Mystics guard Kristi Toliver is one of the reserves.

With Las Vegas hosting this year’s events, they too are well represented on Team Wilson after a trade brought Aces Head Coach over to coach Team Wilson.

The Head Coaches trade makes complete sense. The All-Star coaches are selected based on which teams have the best record in the league before the All-Star deadline.

Although A’ja Wilson is unable to play in the game, she has still been bringing her bright personality and fun to the events this weekend. We even saw that in the draft as Delle Donne, host Maria Taylor, and Wilson made the televised event a memorable one.

The Aces forward picked teammates Kayla McBridge and Liz Cambage along with Los Angeles guard Chelsea Gray. Natasha Howard of the Seattle Storm rounds out the starters for the team, playing in her first all-star game.

Along with the league’s second year using its new format for drafting teams, the league will also have a few other changes. Another change.. a new substitution rule.

Each team will be allowed one live, on the fly, hockey-style substitution per quarter. The player going in will wait at a designated check-in spot near mid-court until the player coming off the court tags them. Only the team on offense can sub during live play, but a player inbounding the ball cannot be live-subbed. Regular substitution rules will still be in place too.

According to the league, they hope the change increases the speed of the game by allowing each team one sub during play. However, it will be interesting to see how well it works out.

In another effort to make the game quicker, the league is also experimenting Saturday night with a 20 second shot clock instead of the usual 24 seconds. In the event that the clock has to be reset, it will reset to 14 seconds.

Finally, for the first time ever, the league will hold its three-point shootout and skills competition the day before the game on Friday at 7 p.m. ET rather than the same day as the game.

It is hard to know how all of these changes will affect the fans and players’ experiences this weekend, but the league is hoping to increase the fun, coverage, and pace of the game. We will find out if the changes pay off, Saturday afternoon as Team Delle Donne takes on Team Wilson in the 2019 WNBA All-Star game.