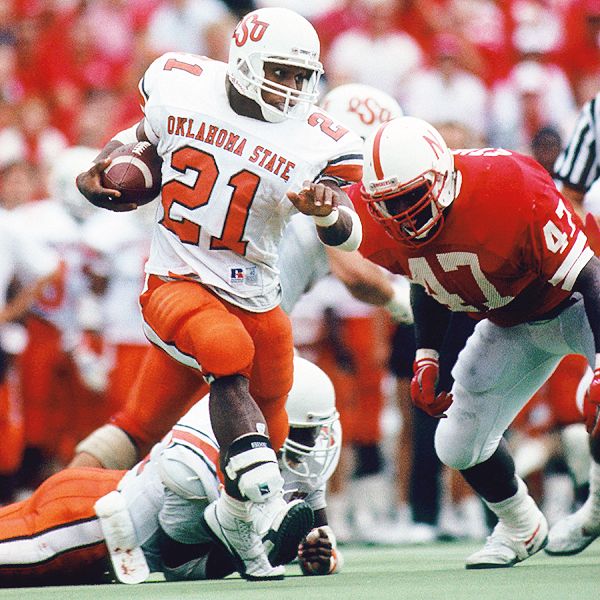 Barry Sanders’ only collegiate scholarship offers coming out of high school were to Tulsa, Emporia State, and Oklahoma State.

Yet at only 5-8 and weighing 200 pounds, Barry Sanders turned those limited scholarship offers to one of the greatest seasons in college football history in 1988.

The Start of Something Special:

That special campaign started from the very first play of the season for the then-junior running back as Sanders returned the opening kickoff 100 yards for a score in Oklahoma State’s opener against Miami of Ohio. The Cowboys went on to win that contest very handily, 52-20, thanks to 178 rushing yards and two touchdowns from Sanders.

A unique aspect of Sanders’ historic season was the fact that his “worst” game was an outing of 154 yards in a 49-21 home win over Missouri.

In 12 games, Sanders ran for at least 154 yards in each contest including four outings of over 300 total rushing yards. In three of those four game totals, Sanders set a new school record for most rushing yards in a game. He also added seven games of four or more rushing touchdowns in a game. Week after week, Sanders dazzled the crowd, frustrated defenses, and racked up incredible numbers.

On the season, Sanders ran for 2,850 yards and 44 total touchdowns and at the same time averaging 237.5 rushing yards per game during the entire season. The lightning bolt ran for 42 of those 44 touchdowns. During that season, Sanders set a whopping 34 NCAA single-season records. Simply put, Sanders was THE MAN in college football in 1988.

In actuality, this Heisman season often goes unnoticed. It is not often mentioned amongst other notable Heisman seasons from Charles Woodson, Herschel Walker, Desmond Howard, and others. Part of that is because of the lack of national television coverage in 1988, some of it is also due to the lack of prestige along with public popularity from the Oklahoma State football program compared to other blue bloods such as Michigan, USC, Ohio State, Alabama, and others. Despite the lack of recognition that his season is still deserving, Sanders produced history in 1988 at a devastating pace.