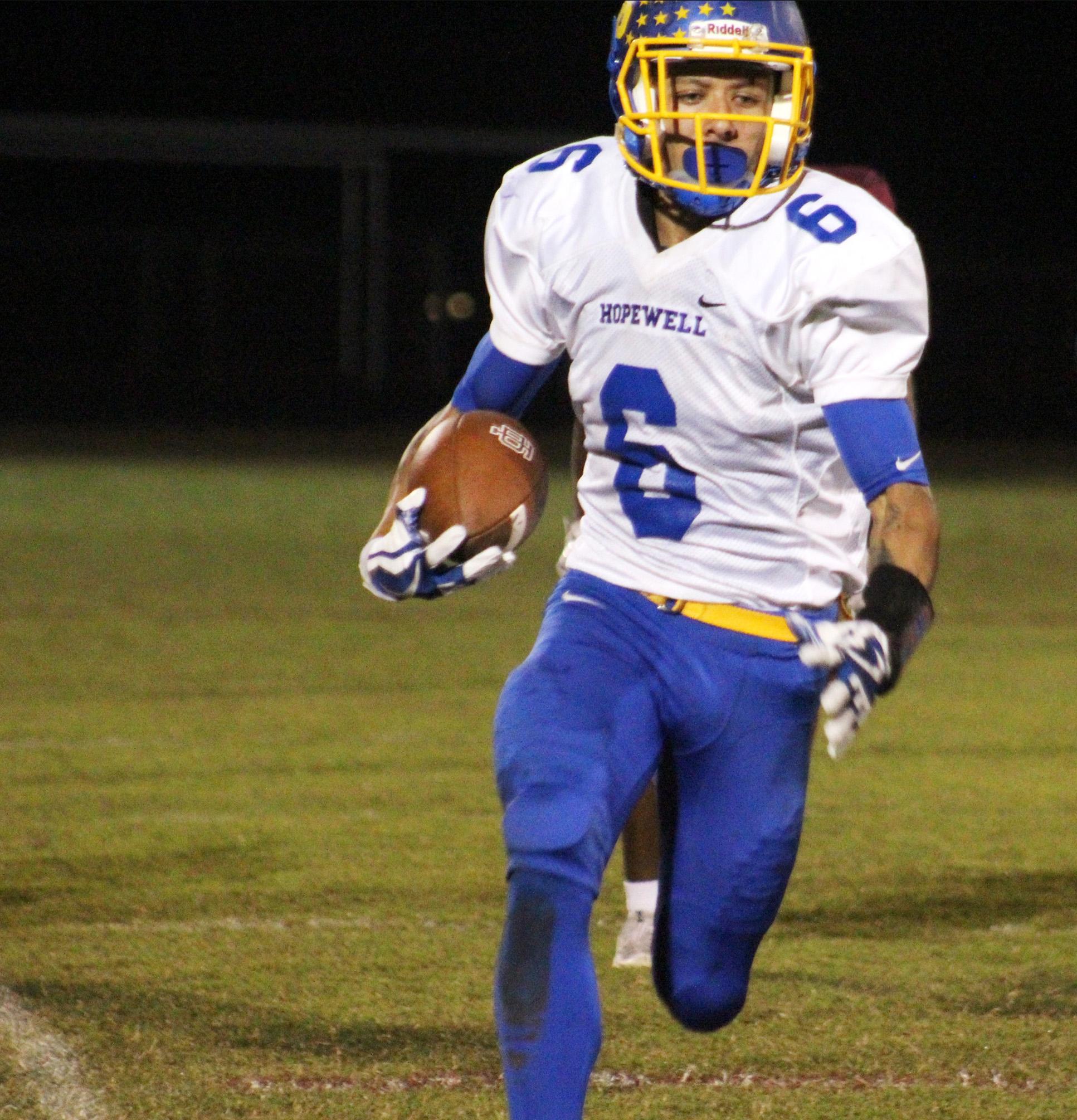 While Hurricane Florence led to the cancellation of Hopewell’s game with Powhatan several weeks ago, Hurricane Michael ’s effect here led to Hopewell’s Homecoming game with Prince George to be moved to Saturday afternoon. Our thoughts and prayers obviously remain with those who have been so negatively impacted by both hurricanes, even in our own state.

The Hopewell Homecoming parade, though delayed, still glided through Hopewell and into Merner Field without a hitch, the Band continued to entertain and to inspire, and the Homecoming game pleased Hopewell fans even more as they shut out arch rival Prince George 42-0. In the process, they won their 6th straight game, 11 in a row going back to last year’s playoff run to their state championship. Prince George saw its record slip to 3-4.

On last Tuesday’s Coach’s show from Hopewell’s “Simply Unique”, Head Coach Ricky Irby relayed how their 5-0 record at the time was the team’s best start since 1982. They now have 4 shutout wins out of 6. They’ll need every bit of that rhythm over the next two weeks as they prepare to tackle Thomas Dale at home this Friday and then Dinwiddie on the road.

Former Head Coach Marshall Parker, who coached a state championship of his own ( 2003), was broadcasting on the radio with me Saturday and marveled at how strong Hopewell ’s team is, particularly when healthy. He especially noted the speed and quickness of the team’s defense. Along with four touchdown passes from quarterback Daniel Grier, it more than made up for the fact tailback Robert Briggs wasn’t 100% in his return from missing two games from a high ankle sprain.

Fullback Kaiveon Cox helped make up the difference rushing 7 times for 49 yards and 1 TD while playing stellar defense, and Grier scrambled and rushed 5 times for 44 yards. He then found time to spread the ball around to wide receiver Sean Allen, (4 catches for 79 yards and 2 Tds), with another four connections to Kadarius Singleton, (good for 40 yards and 1 Td). The team enjoys wide receiver depth: Demonye Tayor also caught two passes from Grier, including a touchdown pass of 25 yards and 1 Td. Another wide receiver Trey Henderson, who caught a TD pass last week, took the opening kickoff of the second half 75 yards for a touchdown. Grier overall completed 10-21 passes for 141 yards and no interceptions.

Defensively, as the Blue Devils faced extraordinarily accurate passing from Prince George quarterback Sa’Quan Harrison, they persisted with pressure to sack him unofficially 5 times. Keyon Williams and Cox are listed with a pair and Keshon Brock with one. When Harrison wasn’t trying to escape the pressure, he had to deal with quite a few dropped passes from his receivers. One perfectly thrown ball would have gone for a long touchdown and cut the Hopewell lead to 14-7.

As Hopewell now prepares for their home game with Dale, they do so remembering how they lost so significantly last year 41-6 in Chester. Coach Irby regularly has said how last year’s losses to Dale, Dinwiddie, and Meadowbrook to end the regular season actually helped to take his team to a whole new level. By playing these strong teams from higher division levels, even with losses, Hopewell strengthened itself upon their following Division 3 playoff participation. 5 wins later and they had their state championship. Hopewell, however, doesn’t think it needs to lose any more to gain experience.

The only area of their game to me that consistently falls below standard is the number of their penalties. Two weeks ago, a major area of concern was their special team mistakes, but in last week’s game, there were no errors in that area. Mistakes become objects of focus in all levels of football.

As I write this, I am watching the Washington Redskins hold on against what looks like a methodical comeback from the Carolina Panthers. The Skins had led 17-0 and looked invincible. But towards the end of the first half and into the second half, Carolina made adjustments to what the Skins had been doing well, and Washington could not readjust well to those adjustments. Now the score is 20-17 in the fourth quarter, and though in favor of Washington, Skins’ fans are realizing that they’ve seen this script before, and some are anticipating another disappointing loss.

But as I return now from a meeting, I discover that the Skins have hung on and barely won this game 23-17. So how much have they learned now from earlier games when they led early only to lose late? Have they crossed the bar from being an average team to being a good team? Time will tell. In that process, coaches will still work with players on how to shore up other weaknesses, in the overall goal of more effective play.

Isn’t that true for each of us as we seek more effective living? None of us want to make mistakes, but real maturity comes when we learn from our mistakes. This takes a good deal of humility and a willingness to not let our pride stand in the way.

I think that the best way for this to happen is to make our lives as much an open book before God as possible. Asking for His guidance and grace, He can empower us towards doing the hard task of humbling our pride. We can then better learn from mistakes, be better teammates, and care more for the collective good than our own individual success.

Can the big “H” in town help to unite us, with God’s help, to be more than a collection of individuals, but a group unite to move our community forward, in the same spirit that is guiding our football team forward?