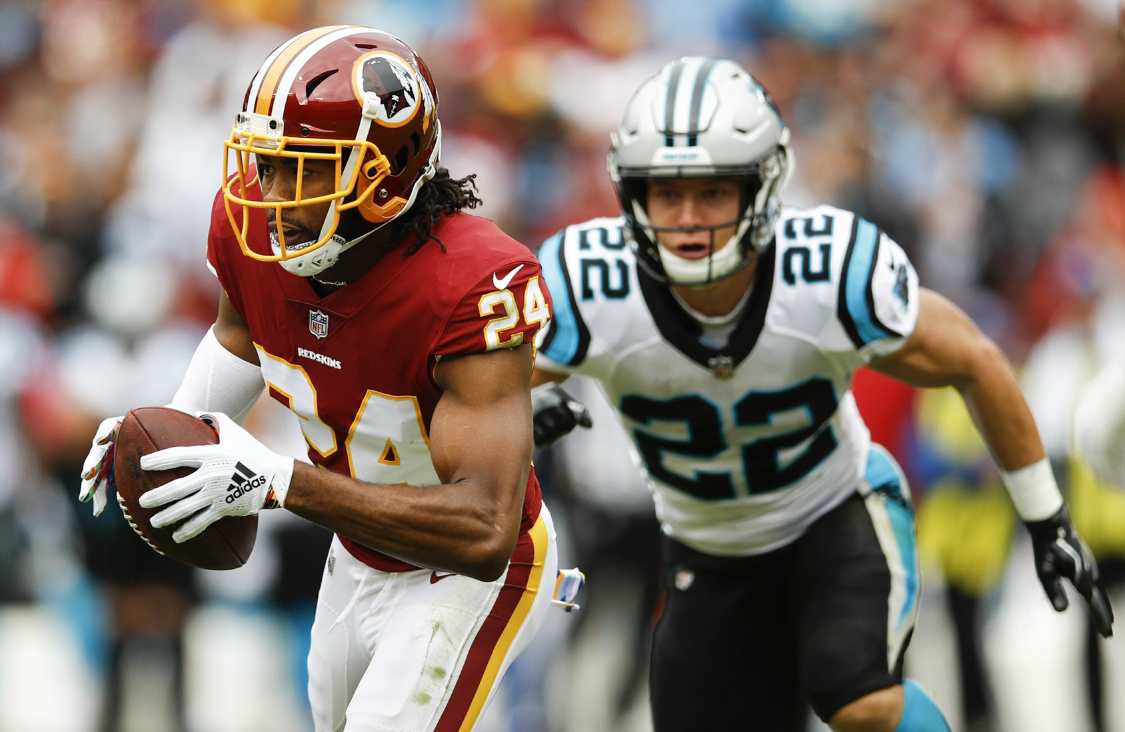 Coming off an embarrassing Monday Night Football loss to the New Orleans Saints, the Washington Redskins had something to prove. The idea that redemption would come in a victory over the Panthers was a far-fetched one coming into the game. After all, the Skins would be facing as complete a Carolina team as we’ve seen all season. Veterans Thomas Davis and Greg Olsen were back in the lineup, putting the finishing touches on roster that is potent on paper. However, the Panthers would have to overcome 55 yards worth of penalties and 3 costly turnovers. In the end, it just was not enough.

After holding Alex Smith and the Redskins to a 3-and-out on their first possession, Panthers rookie DJ Moore returned a punt 1 yard before coughing up the ball on the Carolina 22 yard line. It only took one play, a 22-yd touchdown toss to a wide-open Vernon Davis, for the Redskins to get on the board. Following a Panthers 3-and-out, the Redskins found the end zone again;capping off a 64 yard drive with a 2-yd touchdown reception by Paul Richardson.

Facing a 14-point deficit in the first quarter, the Panthers continued to look discombobulated during the next series. Driving into Redskins territory, quarterback Cam Newton was sacked for a loss and fumbled at the Carolina 45 yard line. Guard Greg van Roten recovered the fumble, advancing it 2 yards. The sigh of relief wouldn’t last long, as Newton was intercepted by former teammate Josh Norman two plays later. The interception was Norman’s first since Week 15 of the 2016 season. Norman was coming off a rough prime time showing during which he was benched at halftime. Speaking with the media following the game, Norman stated that his week had been exceptionally rough. In addition to a Twitter squabble with Saints receiver Michael Thomas, Norman said he caught a lot of heat from fans. “It felt like I was playing cornerback against the whole world.”

Norman’s impressive play continued as he forced a fumble during Carolina’s next possession. With the Panthers driving, Newton hit DJ Moore for 17 yards before Norman punched the ball out of the rookie’s arms as he entered Washington’s territory. Redskins linebacker Mason Foster recovered the fumble as the Skins went on to score a field goal 10 plays later.

Facing a 17-0 deficit, the Panthers finally got on the board with an impressive 23-yard, one-handed grab by Devin Funchess over Washington cornerback Quinton Dunbar. After making the impressive 63-yard game-winning field goal in last Sunday’s win over the New York Giants, Panthers kicker Graham Gano failed to make the extra point as the ball sailed wide left. The Panthers went into halftime down 17-6.

After the half, the Panthers were able to hold the Redskins to just two field goals for the remainder of the game. Coming out of the half, the Panthers scored on their first two possessions to make the game interesting. After settling for a field goal on the previous possesion, Newton and Torrey Smith connected four times on the next drive; resulting in a 3-yd touchdown. The pair connected once more on the 2-point conversion to bring the Panthers within 3. Following a Redskins field goal, the Panthers got the ball back with 2:41 remaining and all three timeouts at their disposal.

After driving to the Washington 16 and facing 2nd and 5, Newton took three shots to the end zone, which all fell incomplete ending the Panthers comeback bid. Following the game, the Panthers locker room expressed their support of DJ Moore in the face of a tough game by the rookie. “Everybody makes mistakes in the world that we live in. We just so happen to be on TV with it,” said fellow receiver Devin Funchess. “Y’all are making a big deal out of nothing. He’s good and when we go play Philly, at home for him, he gone turn up,”

When asked about words of encouragement offered to Moore, Newton stated, “It’s alright, he’ll learn from it. He’s young and at the end of the day, we all got to be better.” Indeed, the Panthers will need to play better when they travel to Philadelphia on Sunday to face the defending Super Bowl champions if hope to escape the City of Brotherly Love with a win.

The Panthers finished with 350 total yards to Washington’s 288 yards. The Redskins controlled the clock with about 11 more minutes of total possession and bested the Panthers in third down efficiency; converting 7 of 16 while the Panthers only converted 3 of 9.