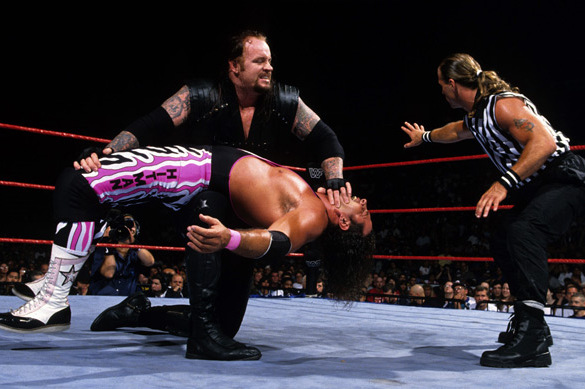 Twenty years ago, a PPV shifted the course of not just WWE history, but Pro Wrestling history. That PPV was SummerSlam 1997. Approximately 20,213 people packed the Continental Airlines Arena in the Meadowlands Arena in East Rutherford, New Jersey to see the 10th Annual SummerSlam. The theme of the night was Hart and Soul. “Hart” referring to Bret Hart and “Soul” referring to the Undertaker’s grim persona. Those two men met in the Main Event with a special guest ref, Shawn Michaels. The events in that match and other matches from the night shifted the course of WWE history.

Vince McMahon was the voice of the WWE for a long time. Unlike most sports owners, he was a part of the Narrative for many years. Towards the end of 1997, his role started to change. He was in the ring more and facing a real-life clash with Bret Hart. This was one of the last major PPV’s that he called. A small narrative to connects to so many things.

The Three Faces of Foley

Cactus Jack, Mankind, and Dude Love. Mick Foley really killed it with his characters in the late 90’s. On this show, we saw two of the characters. Mankind was victorious in a grueling 16-minute cage match with Hunter Hearst Helmsley (Triple H). And after the match, he quickly turned into Dude Love…. who was Co-Tag champs with Steve Austin. Crazy times back then. Most fans knew that each character was played by the same person, but Mick Foley had what it takes to put on a good show.

Back in the day (before I was born), there we a few finishers that Wrestlers did not want to face. The Doomsday Device for the Legion of Doom was one of the finishers. You’re on someone’s shoulders and close lined off. And most times, the opponents of the LOD landed on their neck. Henry Godwin had his neck broken by LOD weeks before this event which setup a match between the two teams. The finisher of this match was a piledriver. This match showed a glimpse of the past. Some finishers used to a little bit on the dangerous side, something that is not seen in today’s WWE. 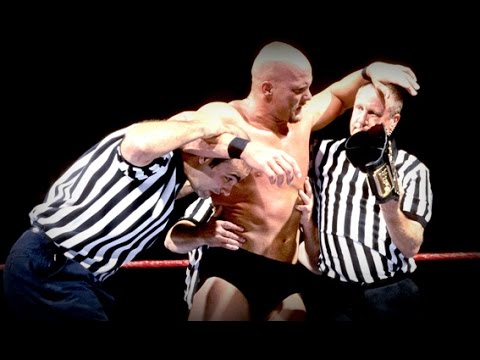 Steve Austin’s rise was mostly made by moments that came at the right time. When fired by WCW, he went to ECW and made a name for himself. In 1996, when Jake Roberts quoted a bible verse, on the fly, Austin created Austin 3:16. In this case, Austin broke his neck and still won the match. A piledriver towards the end of the match hurt Austin badly. Owen Hart found a way to finish the match with Austin with Austin winning. The match stipulation was Austin kissing the buttocks of Hart if he lost, he didn’t lose. And that situation added to his character. His rise to the top was boosted by this and more events happened at the right time. With Bret Hart and Shawn Michaels left the company 6 months apart, Austin benefited from both. A downside to his whole rise was the abundance of Neck problems Austin faced after this.

Hart Foundation vs The World

The Hart Foundation gained a lot of heat during this time. Walking into this event, Bret was in a title chase. The British Bulldog and Owen Hart was title holders. And Brian Pillman just rounded out the group. The group waved around the Canadian and UK Flags and the crowds were hot. Smartly, Vince had a lot of Canadian TV events during this time. Bret slandered the USA one week and the next week, he was in Canada being cheered. After this event, Bret walked out as WWE champion, adding, even more, heat to this group.

The Hart Foundation was amazing in 1997. All four men had heated rivalries and lines were drawn. With the death of Brian Pillman tow months later and the depart of Bret in November, this group’s momentum was quickly halted. No international faction in the WWE has truly gained better heat ever since this group reigned in 1997.

With all the crazy on screen and off-screen tension between superstars during this event, one thing was still obvious walking into this event. The Undertaker was WWE Champion and he was the top dog in the yard. But historically, the Undertaker hasn’t really had long and dominant run with the WWE, WWF, Undisputed or World Title (Big Gold Belt). All 3 of his WWF title reigns lasted less than 3 months. His reign coming into this event was his longest. His WWE Undisputed title reign was short. And two of his three world title reigns were less than a month. Overall, the Undertaker is a 7-time World champ. But his reigns should’ve been longer in my opinion. His character was meant for it and it didn’t really happen. 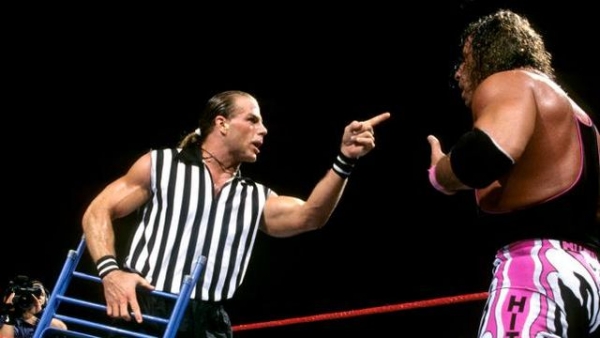 Shawn and Bret did not like each other. The tension was so bad that on some occasions, the wrestler didn’t even want to lose their titles to the other man. The stipulation in this match put both men in a bind. If Bret lost, he could Wrestle on US soil again. But if Shawn interfered with Bret, he couldn’t wrestle on US soil either. Shawn’s chair shot on the Undertaker helped secure a title win for Bret. On the inside, Shawn was not in a great mood. Helping a rival wasn’t easy and Bret took advantage. But for Michaels, he had another problem to worry about.

Hell in the Cell Build Up

Shawn Michaels cost the Undertaker the WWF title on screen. Off Screen, Taker did not approve of Shawn’s drug abuse and creative control for years. Shawn’s chair shot led to the first Hell in a Cell match. Besides the 2011 Cena vs Punk clash at Money in the Bank, this match was the last time that the WWE received a five-star match rating from Dave Meltzer. The Undertaker dominated Shawn throughout the match. There was blood, a fall from a cage, and a debut. Vince’s creative juices were flowing as he used this match to introduce the Undertaker’s brother: Kane. Kane’s debut shocked Taker and helped Shawn to win the match, which boosted his status walking into Survivor Series 1997.

About that PPV by the way……

Survivor Series 1997 led to another WWE moment, the Montreal Screw job. Vince McMahon putting the title on Bret Hart leading up to this event was tricky. After SummerSlam 1997, Bret Hart went into contract talks with the WWE and WCW. As he leaned more and more for WCW, Vince had to think a way to get the title off Bret. He feared that Bret would show up on WCW programming with the belt. During a brewing rivalry with WWF’s stop star Shawn Michaels, a very heated Monday Night War, and repercussions from not liking WWF’s change of attitude; Bret Hart became a casualty of the Monday Night War. This event marked his last reign with the WWE Title, and in my opinion, his last reign of true relevance. His WCW title reign meant nothing and literally after his departure, the WWF went in a more successful direction.