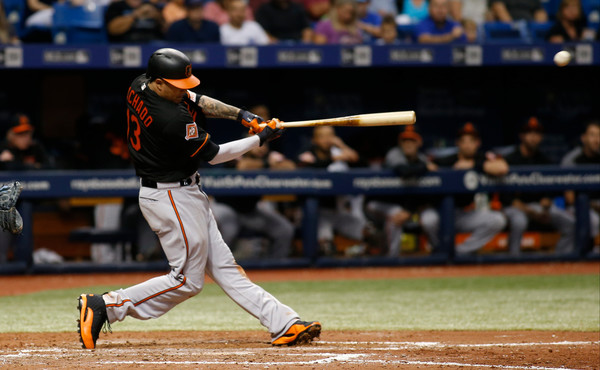 During the Winter Meetings the St. Louis Cardinals acquired a guy coming off a Gold Glove and All-Star season, he was worth almost 6 wins.

His name is Marcell Ozuna and the Cardinals gave up next to nothing for him other than one of their abundant pitching prospects, Sandy Alcantara.

That leaves them with plenty of other resources as far as prospects go. And because of those resources the Cardinals still have tons of other options in the trade market, and that has left them linked to names like Chris Archer, Josh Donaldson and Manny Machado.

Machado would pair perfectly with Ozuna in the middle of the lineup and would make one of the worst defensive teams in the league at least adequate. Baltimore has been fielding offers since the Winter Meetings, and it’s been reported that the Cardinals, Chicago White Sox, San Francisco Giants and Philadelphia Phillies have all made offers for the superstar infielder.

With just one year left on his contract Baltimore can’t be expected to ask for very much in a trade unless Machado agrees to an extension with the team he’s going to. After getting Ozuna on a bargain it’s not unreasonable to think the Cardinals could swing a trade for Machado without giving up the farm. So what would a potential package look like?

Without an extension in place:

Without an extension the Cardinals aren’t guaranteed to keep Machado past next year, and that significantly weakens Baltimore’s bargaining power. So a potential package would probably be built around just one of St. Louis’s top pitchers as well as some complimentary pieces. It would probably look something like Jack Flaherty, Randal Grichuk and Jordan Hicks. That gives Baltimore one MLB-ready pitcher in Flaherty, a power bat in Grichuk, and a high-upside arm in Hicks. Baltimore could pair Flaherty with Dylan Bundy and Kevin Gausman to form a rotation built around three solid young arms.

With an extension in place:

In the event that the two teams come to an agreement on a trade Baltimore could grant the Cardinals 72 hours to negotiate a contract with Manny Machado. If Machado commits to St. Louis long term, Baltimore can demand much more from the Cardinals. Baltimore would probably want a package still built around Flaherty, but they could demand more than Grichuk by a mile. That package looks more like Flaherty, Harrison Bader and Hicks as well as one or two more complimentary pieces. In this scenario the Cardinals still hold on to Carson Kelly (Yadi Molina’s heir) Luke Weaver and most importantly Alex Reyes. Baltimore gets a number of high upside players that are near or ready for the MLB and the Cardinals get a true, established superstar to lead the team for years.