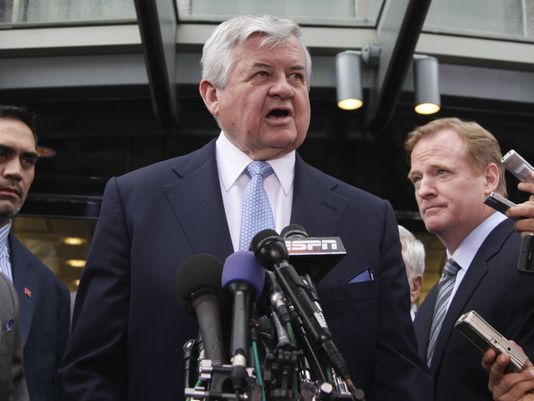 The Carolina Panthers initially announced they are launching an investigation into their owner and founder Jerry Richardson. Now, the NFL will take the lead.

CHARLOTTE — The Carolina Panthers announced on Friday they are internally investigating their owner and founder, Jerry Richardson, for allegations of workplace misconduct. However, this decision led to scrutiny and criticism. Many wondered, how would the Panthers conduct this investigation without conflicts of interests when it involves the owner of the team?

Now, the NFL will take the lead and conduct its own investigation, according to Brian McCarthy, the league spokesman confirmed today. The Panthers reached out to the league and asked it to take over.

It is still unknown exactly what ‘workplace misconduct’ entails, and this is still an ongoing investigation.

Panthers Head Coach Ron Rivera spoke with ESPN’s Josina Anderson ahead of the game this afternoon and spoke about the situation involving Jerry Richardson.

“I learned of them Friday you know. Just a little bit surprised,” Rivera said to Anderson. “Just because who Mr. Richardson has been for me. I’ve gone through some things here. I had a house fire where he was tremendously supportive.”

Rivera mentioned in the exclusive interview with Anderson that he spoke with his players during last night’s meeting. He cautioned that everyone should “be careful” in what they are talking about because the investigation is ongoing.

Rivera also said to the team last night that if they choose to speak about the situation they should talk about what Jerry Richardson has done for them “personally and individually.”

The Panthers released a statement this past Friday acknowledging the allegations.

“The entire organization is fully committed to ensuring a safe, comfortable and diverse work environment,” said Panthers spokesman Steven Drummond. “Where all individuals, regardless of sex, race, color, religion, gender, or sexual identity or orientation, are treated fairly and equally. We have work to do to achieve this goal, but we are going to meet it.”

The Carolina Panthers are preparing to face the Green Bay Packers today at 1 p.m.