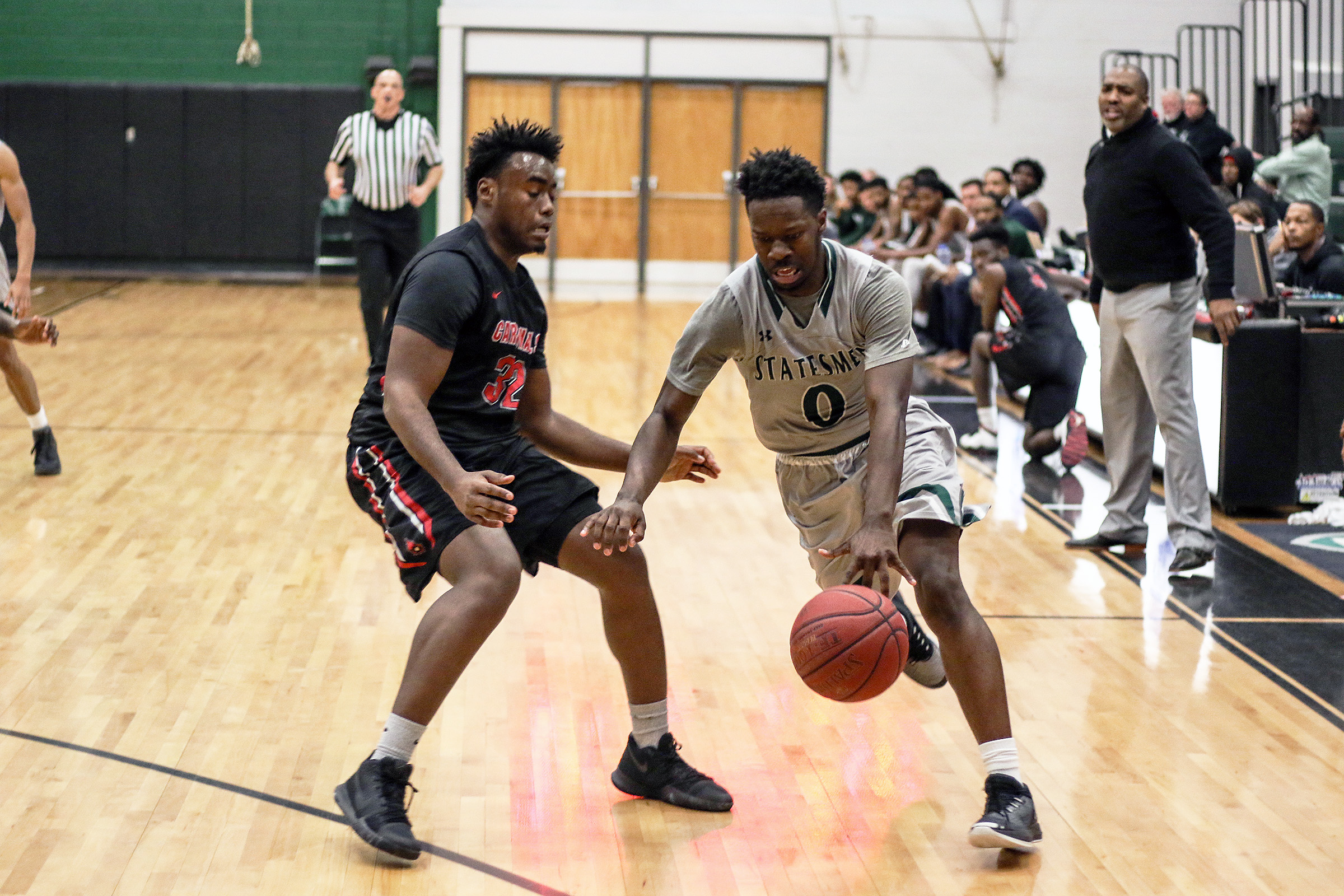 Richard Bland fell behind early at 9-4 just 2:21 into the contest, but quickly closed to 9-8 at 16:30 following consecutive layups by Bing. Catonsville maintained its advantage, however, leading by as many as six points during the opening half before the Statesmen tied it at 28-28 with 8:07 on the clock after a three-point field goal from freshman Marvin Trotman/Virginia Beach. The Cardinals led 35-30 at 3:11, before a quick 9-2 run gave the home team its first lead at 39-37 with 1:47 left until halftime as Patterson ignited the outburst with a slam dunk. Two free throws by Bing tied it again at 41-41, but the visitors made a last-second three-pointer to lead 44-41 at the intermission. Trotman scored nine first-half points, while Bing and Patterson each had six.

Catonsville took its largest lead of the contest at 55-46 with 14:42 remaining, but Richard Bland responded with 11 unanswered points to lead 57-55 at 10:57. Patterson again started the run with a dunk, followed by another dunk by Taylor, who added a layup, followed by a three-pointer from Bing and a basket by sophomore Ricky Hicks/Bronx, New York. It was tied at 57-57 before a 13-2 run made it 70-59 at 5:58 as Patterson scored seven quick points. The Statesmen took their largest lead at 85-71 with just 1:26 to play via a layup from sophomore Deon Joyner/North Charleston, South Carolina. The Cardinals managed to close to within 85-80 with 32-seconds on the clock, but Trotman and Bing closed it out with two free throws each.

Bing led Richard Bland with his team-high 20 points, including 6-8 free throws, adding five rebounds and five assists. Patterson added his career-high 18 points, along with five rebounds, three assists, two steals and two blocks. Taylor finished with his 12 points and eight rebounds, adding two blocks, as well. Trotman scored a career-high 11 points, adding three rebounds, while Joyner had eight points and Hicks added five points and a game-high six assists. Richard Bland shot 52% (34-65) from the field, including 31% (4-13) on three-pointers, and 65% (17-26) at the free throw line. The Statesman had a 52-34 advantage in points scored in the paint.

McCormick, the second-leading scorer in NJCAA Division II, led Catonsville with his game-high 26 points, adding seven rebounds and four assists, while Jasper Sterling added 10 points. The Cardinals shot 44% (28-63) from the field, including 30% (6-20) on three-pointers, and 59% (20-34) at the line.

Richard Bland and Catonsville were playing for the fourth time in the sport of men’s basketball, and the Statesmen lead the series, 4-0.