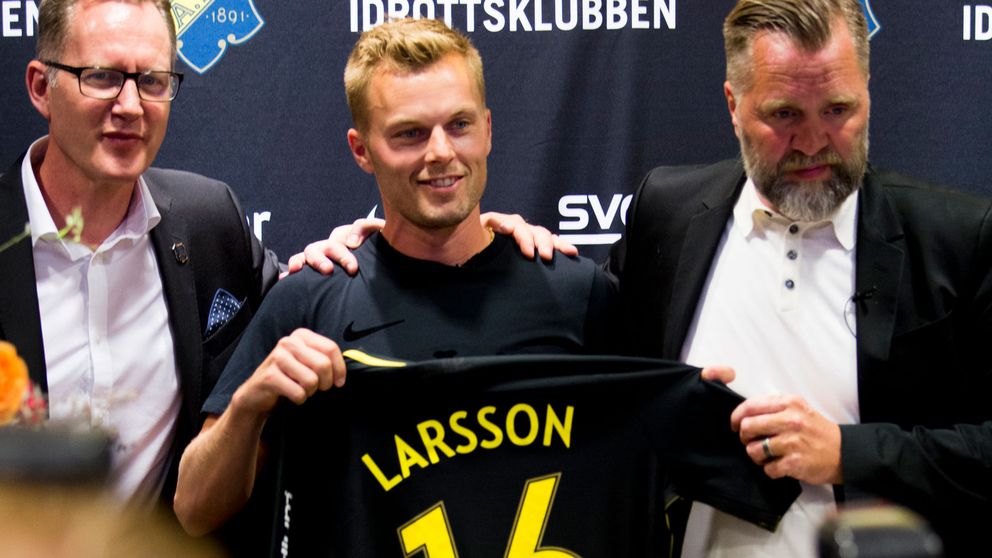 Sebastian Larsson’s Sweden reached the Quarter-Finals at FIFA World Cup Russia 2018 this past summer to mark the nations greatest finish at a FIFA World Cup tournament in 24 years.

Larsson, who has won 106 caps and scored six goals for Sweden, joined Allsvenkan club AIK this summer after spending one season with SKY BET Championship side Hull City.

The accomplished Swede, known for his trademark accurate set-pieces and ball distribution, has won Player of the Year accolades at both Sunderland and Birmingham City throughout his career.

The 33-year-old Swedish midfielder, who has been a pivotal figure for Sweden in three European Championship tournaments competed in his first FIFA World Cup with Blågult this past summer.

Dean Perretta: Firstly Sebastian, AIK are currently leading the Allsvenkan table by eight points clear at the top with Hammarby IF trailing in second. Having won three out of the last five Allsvenkan games, how confident are your that AIK can now maintain this positive form and ultimately go on to win the Allsvenskan?

Sebastian Larsson: Obviously we’re in a good situation, a good position in the league now where we’re full of confidence, having won seven games in a row. But we’re also gonna stay humble and make sure that we keep focusing and keep doing the stuff we’ve done so far which means hard work – really making sure that we’re humble and try to maintain the positive form that we’ve got.

Dean Perretta: Rikard Norling’s currently in his second managerial tenure with AIK after returning to the club in 2016. What are your overall thoughts on Rikard Norling’s man management and tactical philosophy from a players perspective?

Sebastian Larsson: He’s obviously been very successful here in AIK since he came back in 2016. I can only speak about the time that I’ve been at the club, which is not very long, but I’ve been impressed by him. When it comes to the tactical part of the game, he’s very thorough and we work a lot on it. We feel that we’ve got all the information we need to know about our opponents in each and every situation. I, like everyone else, am learning day by day and getting to know Rikard (Norling) and what he wants more and more, so I have only positive things to say.

Dean Perretta: The Tvillingderbyt contested by AIK and Djurgårdens IF remains as one of the most talked about fixtures in all of Swedish football. What do you feel separates the very passionate Tvillingderbyt to the other fiercely contested derby games which you have personally experienced throughout your career?

Sebastian Larsson: Well, it’s a tough one to answer as I haven’t experienced it yet. I’ve been involved in many derbies in England where I suppose Sunderland – Newcastle is the fiercest one. It’s gonna be interesting to see how it is over here in Sweden with the Stockholm derbies and I’m really looking forward to it. I’ve heard a lot about it and it’s meant to be a fantastic atmosphere, so I’ll have to wait and see.

Dean Perretta: The Friends Arena is a fortress on match day for AIK. How would you describe the passion and atmosphere of the Gnagare?

Sebastian Larsson: They’ve been great. Ever since I came to the club they’ve been great towards me and great in supporting the team. It’s a bit different to what I’m used to in England. Here we got the singing sections with the hardcore supporters all together behind the goal and it makes it a real proper atmosphere and you can always count on them giving you that extra energy that you need so hopefully they, and I’m sure they will, keep pushing us all the way until the season is over.

Dean Perretta: Before we leave Sebastian, you were instrumental in Sweden reaching the Quarter-Finals at FIFA World Cup Russia 2018.  How proud are you to now be a part of Swedish football history courtesy of Sweden’s greatest finish at a FIFA World Cup tournament since 1994?

Sebastian Larsson: It is obviously something that I’m proud of. It was a fantastic tournament and to be able to reach the quarter final for Sweden was probably beyond peoples expectations, so I’m immensely proud of that, but I guess that is something that I will look at more when I’m older and look back at my career. Now I’m just fully focused on what’s here and in front of me now. Obviously I’m proud, but I’ll probably be even prouder once I hang my boots up.