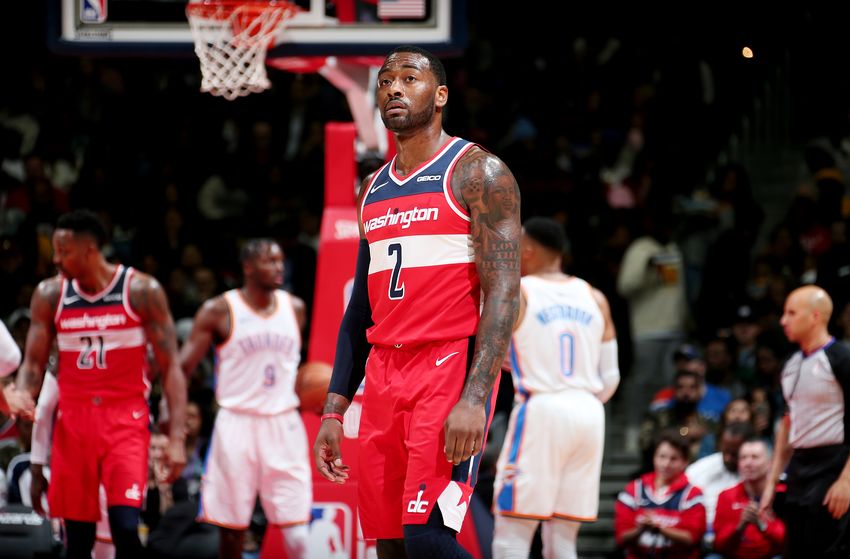 WASHINGTON- After returning from a two-week road trip on the west coast, the Washington Wizards returned to the nation’s capital to shake off a slow 1-6 start. Unfortunately, the only thing that players had to shake off last night was the “boo” chants that welcomed the Wizards going into halftime and at the end of regulation. The Oklahoma City Thunder defeated the Wizards 134-111.

The first half pretty much summed up a trend that would continue going into the second half where OKC scored a team record of 79 first-half points. Washington never had a chance of taking the lead against a Russell Westbrook who dominated on the pick and roll and led his team in scoring with 23 points, 12 assists and 4 steals.

But the story isn’t about Russell Westbrook and his dominance. The story is about the Wizards shooting 30% from 3 point range versus a 46% for OKC, turning the ball over 18 times and going -23 in the +/-.

“We have to figure out ways to play better in all the 48 minutes we’re on the floor, whether it’s going with a smaller rotation or it’s playing other guys. I have to figure it out. We can’t just keep watching the same thing over and over and over and expect things are going to change. I like to give guys opportunities, and you know what, we have to play better. Our plus/minus is ridiculous. This team is really good, and they’re playing really good basketball right now but they should not have been able to do that on our home floor in a back-to-back game.” said Coach Brooks.

Washington allows a league-worst 123.9 points per game and on Friday night they gave up too many uncontested threes to a team who shoots a league-worst 26% from that range.

Friday night’s performance raised concern for Wizards fans, leaving them to believe if it’s time to hit the panic button.

“I’m not hitting the panic button. I’m not hitting it and I don’t think we are either as a team. We understand it’s early. It’s not perfect and patience is running low from everybody, from ourselves,” said Bradley Beal. “Nobody is more disappointed than us. I’m definitely going to say that. It’s not like we’re going out to lose every game. Nobody has that mindset, we’re just coming up short. We’re not doing the things we need to do and we just have to get better. The only way to get through it is we just have to fight our way out of it. That’s the only way.”

It’s going to take a Floyd Mayweather mindset to fight their way out of this 1-7 start which is similar to that of last season but this roster has some new pieces. Those new pieces include Dwight Howard who scored 20 points in his regular season debut.

When speaking on Howard’s presence on both ends of the court John Wall said, “We never have problems offensively. Dwight [Howard] being there helps on the defensive boards and getting rebounds and that aspect of the game – and him being able to finish in the post and around the basket, but at the same time…you still have to be able to defend at a high level and we’re still not doing that.”

The Wizards now sit at the bottom of the Eastern Conference barrel at 1-7 and welcome the (3-6) New York Knicks on Sunday. Of course, that is a game that should be favorable to the home team but with the Wizards, there’s honestly no telling.