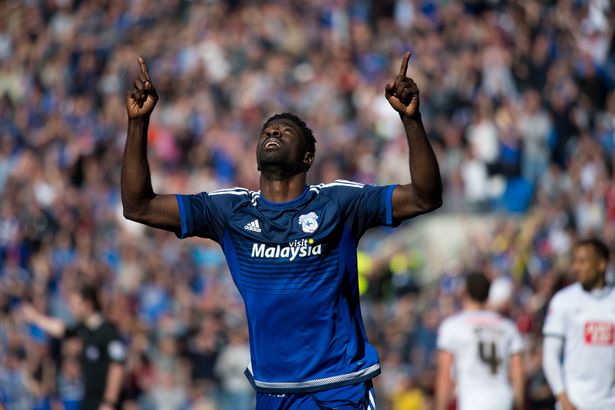 Neil Warnock’s Cardiff City are presently 16th in the Premier League after earning 14 points from 17 games. The Bluebirds have won two of their last five Premier League games, whilst also scoring six and conceding eight in their previous five league games.

Wala Amara: Firstly Bruno, what are your thoughts on the Bluebirds forthcoming Premier League fixtures throughout the festive period?

Bruno Ecuele Manga: As soon as I arrived to the club, things were going really well. Aside from that that, it’s the Premier League and so things are always super competitive in the Premier League. We started off really bad, because since the beginning, we were only encountering big and strong teams. So, things weren’t to our advantage, but we still managed to do as best as we can. We knew that the season was going to be long and hard and we don’t have that much experience in the Premier League. We’re very new to this division, we’re all young players, we hope to keep going and score points against our opponents.

Wala Amara:  Cardiff City lost 1-0 to Everton at Goodison Park in the Premier League this past Saturday. Do you feel this result was not necessarily a reflection of the overall performance shown from the team?

Bruno Ecuele Manga: I don’t think so. We had the chance against Everton to perform well. Despite the competitiveness, we played well, we demonstrated that we were able to compete. We had a very good game especially the first half, then afterwards, things changed. We’ve got to keep hanging on because all the teams that we played against were all big and good teams and we were taking a lot of points. We made mistakes, but we need to find a way to rectify those as we move along. It’s going to be a fight until the end, doesn’t matter the challenge.

Wala Amara:  Neil Warnock has secured promotion eight times throughout his near forty year career in football management and has also successfully weathered relegation survivals and battles. Can you talk about the managers experience and man-management that has so often helped Cardiff City pull through?

Bruno Ecuele Manga: Since he (Warnock) arrived, he demonstrated good will and he did a good job. Throughout my whole career, I haven’t met that many coaches like him. Outside of the field, he acts like a father with us. Not only about football, we can talk about anything with him. Doesn’t matter the topic, he’s willing to talk with us. That’s what I love about him and that’s what made me attached to him in a way. It’s that he considers us as human beings before being footballers. We as a team, we don’t hesitate to talk to him about anything. He really puts a lot of emphasis on that. He’s a good human being aside from being an excellent coach

Wala Amara:   You currently lead in interceptions this season for Cardiff City, as well as being third in clearances and third in tackles this term at the club. With that being said, which areas of your game are you continuously working harder on throughout training each day?

Wala Amara:  What are your thoughts on Gabon’s 2019 Africa Cup of Nations qualification campaign?

Bruno Ecuele Manga:  It depends how we perform as a team. It’s not only about a player in particular

Wala Amara:  What are your thoughts on Gabon’s 2019 Africa Cup of Nations qualification campaign?

Bruno Ecuele Manga:  We had a very sloppy start, but recently, we lost (1-0) against Mali, but we’re still on track. We’re third, but we need to win against Burundi. Away games in Africa are really hard. I think that in March, it’s going to be the finals and we need to give it all to give the Gabonese public and fans something to cheer for. We will fight until the end, we will go and try to get that qualification.

Wala Amara: Lastly, what would it mean to compete in your fifth Africa Cup of Nations tournament in your career?

Bruno Ecuele Manga:  For me, it would be an enormous step because there isn’t that many players that participate in five African Nation Championships. I will be enormously surprised because I didn’t expect that many appearances in this tournament. For my Gabonese career, it would be really huge. As long as I’m playing, I will always remain available for my country.