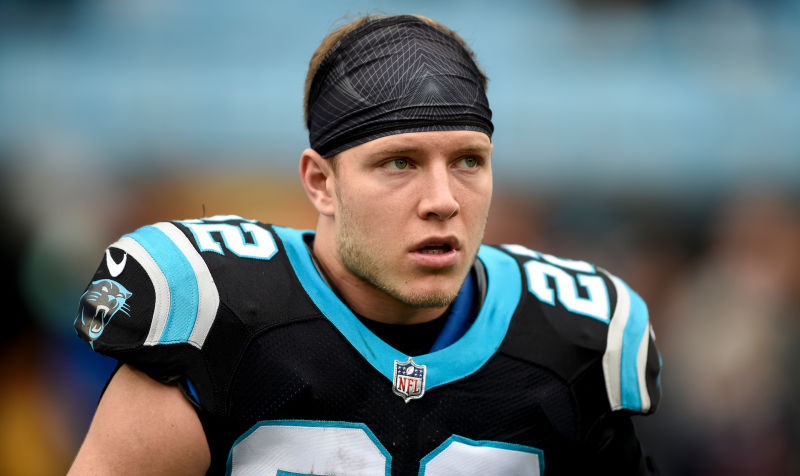 Usually it’s difficult to find the silver lining when a team is mired in a seven-game losing streak. However, the only thing that has remained consistent this season for the Panthers is the outstanding play of running back hybrid Christian McCaffrey.

McCaffrey has been a record-breaking machine in his second season with the black and blue. Sunday was no different. In a game where nothing but pride was on the line, the Panthers dropped their seventh straight game to the Atlanta Falcons in front of the home crowd. McCaffrey, on the other hand, added a couple of franchise and NFL records.

On a family scale, McCaffrey bypassed his father, Ed who had 101 catches in his career season. However, don’t expect the younger McCaffrey to have bragging rights at the dinner table just yet. “He’s going to come back with having three Super Bowls – he’s got me there,” McCaffrey said. “I’m lucky that they throw me the ball a lot, and it’s my job to make those catches.”

While the individual accolades are nice, McCaffrey is quick to remind folks that winning is the most important objective. “At the end of the day, I just want to win. All that other stuff is great, but there’s nothing like winning,” McCaffrey said. “It’s a tough sport and it’s not always good to you, but you’ve got to stay poised through the good and bad.”

At the end of Sunday’s game, McCaffrey has a total of 1,925 scrimmage yards, another franchise record. He became only the third player in NFL history to record at least 100 receptions and 1,000 rushing yards in a single season, joining Forte and LaDainian Tomlinson.

Panthers head coach Ron Rivera knows more than anyone how special a player McCaffrey is. “I think anytime you have a player playing at such a high level, he’s a very uh, he’s a great deal to your team, to your offense and um, you know again, he’s done a great job for us and I really do appreciate his effort every week,” said Rivera when speaking with media on Monday. “I think he can do it all for you. He’s a solid football player, you know again, we’ve gotta be smart about it going forward. You know, we’ve gotta make sure that we have all the other pieces we need to be in place and again, there’s a group of young guys that play receiver that have done a great job for us and they’ve got to continue to learn and grow at their position as well.”

Per Panthers.com, McCaffrey needs just 75 yards on Sunday to become only the 10th player in NFL history with 2,000 scrimmage yards in his first or second season. The Panthers and Saints kick off at 1PM, EST from the Mercedes-Benz SuperDome.