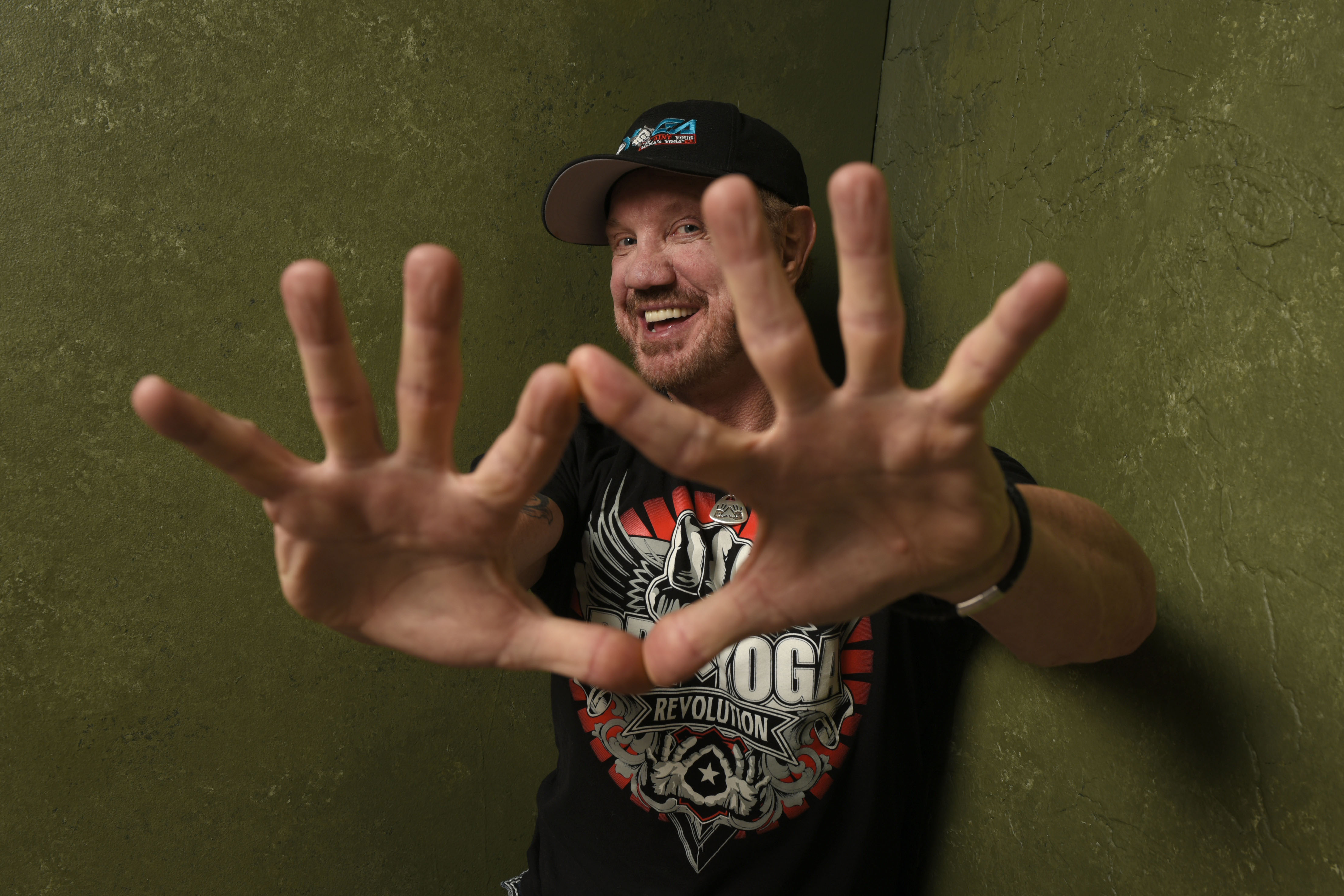 However, Dallas Page’s latest title to add to the illustrious aforementioned list of vocations in his decorated career was as executive producer for heralded Slamdance Festival 2015 docu-film “The Resurrection of Jake The Snake Roberts”, which witnessed Dallas Page motivating, guiding and personally training close friends and WWE Hall of Famers Scott Hall and Jake “The Snake” Roberts to turn their lives around after experiencing deep personal demons; Hall wrestles with alcoholism, whilst the deeply repentant Roberts fights a cocaine addiction.

The celebrated New Jersey native explains the past, present and future of his unique journey and life in Dean Perretta Meets “Diamond” Dallas Page. Feel the bang!

“I wouldn’t be caught dead doing regular yoga” stated the charismatic Page when questioned about the differentiation between DDP Yoga and other yoga programs currently on the market, whilst adding “DDP Yoga’s all about tone and attitude. It’s not your Grandma’s type of yoga. We’ve created a successful DVD series, and it’s both easy and fun for people of all ages to do. DDP Yoga focuses on efficient diet changing, calorie counting and there’s also modifications for the program. There’s also going to be DDP Yoga for kids aged 7, 8, 9 and 10”.

During Page’s legendary career as a sports-entertainer, an unlikely major breakthrough as a performer arrived when the star was aged 40 after years of working his way up the ladder for Ted Turner’s WCW, which was based in Atlanta, Georgia before being purchased by WWE billionaire Vince McMahon in 2001 after the infamously intense Monday Night War between both organizations ended (Page later worked for WWE and TNA Wrestling thereafter); Page initially started as a manager before transitioning into a full-time performer which worked 270 days for continuous years (Page originally embraced yoga after suffering a near career-threatening injury).

“Even though I’m retired from Professional Wrestling and one year away from sixty, If I could face anybody from today it would be Randy Orton. You see, what’s interesting is that it would be the RKO versus the Diamond Cutter. Before Randy (Orton) was delivering the RKO from out of nowhere, I was the one dropping guys with the Diamond Cutter all of time from out of nowhere” commented Page when asked about who he would compete against if he could hypothetically face any active superstar in sports-entertainment today.

Admittedly, Dallas Page noted that “Spider-Man” film actor and WWE Hall of Famer, Randy Savage played an integral part in him getting over with fans worldwide and reaching main event status in sports-entertainment (Page had a multi-year, million dollar contract with the Ted Turner-owned entity).

During the apex of superstardom in the squared circle, Page unequivocally spoke of how he experienced a personal career highlight when tag teaming with 14-time NBA All-Star Karl Malone to go up against the New World Order’s Hulk Hogan and five-time NBA Champion, Dennis Rodman; Page also later teamed with the star of “The Tonight Show”, Jay Leno.

“Karl (Malone) was an incredible athlete, not only just an incredible basketball player. He really respected the business and trained so hard. Karl is the NBA’s second leading all-time scorer, with more points scored than Kobe Bryant” Dallas Page recollected when alluding to the excellent work ethic and talent of the Naismith Basketball Hall of Famer and Olympic gold medalist.

Prior to superstardom, Page spoke about owning a successful bar and encountered revered entertainment luminaries such as GRAMMY Award-winning rock legends Bon Jovi as well as an array of A-list celebrities and professional wrestlers, whom would also visit the ever-positive Page’s successful bar. Page went from rubbing shoulders with the stars to becoming a shining one humself.

Page’s DDP Performance studio officially launched in September 2015 after the overwhelming success of DDP Yoga. The DDP Performance studio was a major lauch that invariably coincided with the promotional campaign for “The Resurrection of Jake The Snake Roberts” docu-movie. In addition, Dallas Page undertakes various motivational speaking seminars with regularity and staged successful DDP Yoga seminars in the UK in 2017.

Jake “The Snake” Roberts – who fought an intense cocaine addiction – personally moved into Page’s home full-time in order to get his life back on track with DDP Yoga, dietary alterations and positive actions before it was too late, whereas Scott Hall (one of the founding members of the New World Order) – a heavy drinker since the late 90s – routinely fought hard in succeeding with sobriety to defeat alcoholism (Hall started drinking to combat Professional Wrestling’s full-time schedule of being on the road non-stop); Page later inducted Roberts into the WWE Hall of Fame 2014 during WWE WrestleMania XXX weekend in New Orleans, LA.

Roberts was reborn again. Page has alluded that without cocaine, Roberts mental faculties are sharp and devoid of fog when engaging in thought. Roberts was the master of psychology and promo’s during his Hall of Fame sports-entertainment career.

Dallas Page is a Humanitarian Award recipient courtesy of his undying compassion and rich empathy in improving the lives of others (Page essentially saved the lives of Scott Hall and Jake Roberts). The DDP Yoga founder has also overcome many obstacles in his own life in the form of dyslexia when growing up, which in turn contributed to the inspiring Page reading his first full novel in his early 30s.

Be that as it may, it was in 1999 when the Professional Wrestling icon and Hollywood actor published his first-ever autobiography entitled “Positively Page: The Diamond Dallas Page Story”, with a successful follow up book “YRG: Yoga for Regular Guys” published in 2005.

“Jimmy Valiant, Bruno Sammartino, Dusty Rhodes and Billy Graham were some of my favorite guys in the business when I was growing up” Dallas Page confirmed, whilst adding “We (WCW) never won the Monday night war against them (WWE), but I am fine with that because I was inducted into the National Wrestling Hall of Fame” the actor said when posed with the possibility of being inducted into the prestigious WWE Hall of Fame.

Regardless, “Diamond” Dallas Page is a bona fide people’s champion between the ropes and more importantly – in life itself. The multi-talented entertainer and DDP Yoga Founder continues to uplift, inspire and redefine the legacy and the lives of those in need for improvements in life.

The master of the Diamond Cutter is also the master of his own destiny with undying endeavor and excellence in becoming a better version of himself with each passing day with belief, positive thoughts and hard work.