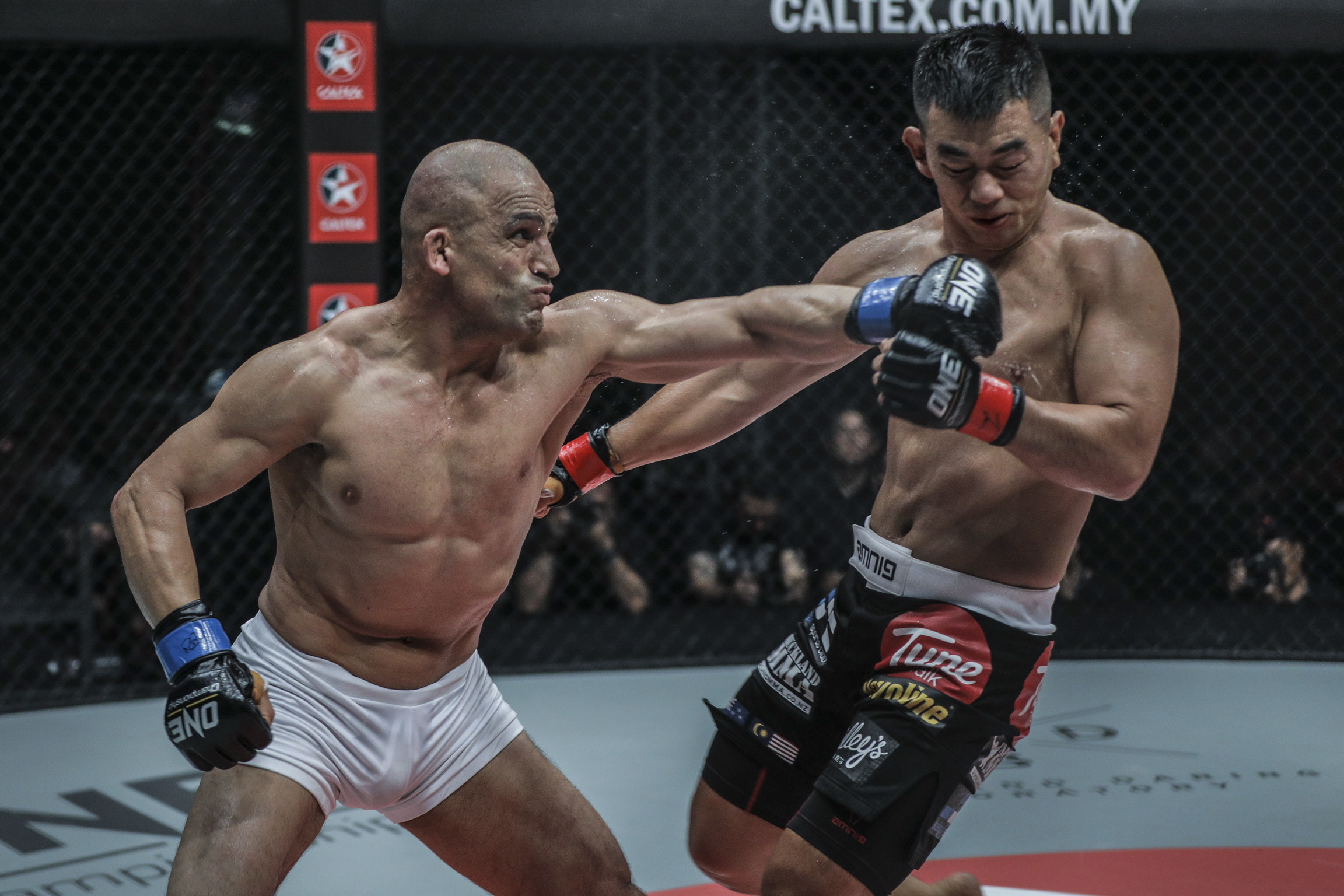 ONE Championship star Kamal Shalorus was born in Khalkhal in the ever-humble Ardabil Province of Iran. For the one-time UFC and WEC athlete, growing up on an extremely rustic farming community situated in the mountains, there was no electricity, no formal education, no television, with the nearest hospital being many miles away. When the vastly harsh winter season came, all of the snow-filled roads in Kalkhal were closed, which led to frequently arduous and painfully extensive seven hour journeys to Tehran.

Shalorus was educated from elders in Iran (Shalorus later attended the University of Westminster in London), whilst also during adolescence it was his job to protect family sheep from the rabid wolves that often scowled and killed. The ONE Championship Light Heavyweight athlete – who came from a sheep herding family – vigilantly stood on guard overnight in preparation to slaughter wolves that remotely dared to hunt the Shalorus family sheep.

Living in such a uniquely unconventional community during adolescence, there were no distractions, which created an unprecedented focus, dedication and fearlessness which translated into adulthood. Shalorus’ undying passions growing up were farming, hunting, and wrestling. However, it was indeed wrestling that became the mighty Iranian’s meal ticket and salvation in making a dream come true.

Against all odds, Shalorus – a highly decorated Greco-Roman wrestler – represented Great Britain (after relocating from Iran) in an Olympic Qualification tournament where the professional athlete placed 8th place. Since then, Kamal Shalorus has competed for avid sports fans in sold-out arenas worldwide on the bright lights of pay-per-view action for UFC, WEC, whilst currently performing for the acclaimed ONE Championship in Singapore – the number one Mixed Martials Arts promotion in Asia. Kamal Shalorus’ inspirational story is one that will resonate long after the final bell tolls. However, there is more to the Iranian than what meets the eye.

Q: First and foremost, can you touch on your humble origins growing up in Iran?

I grew up in a small farming community in the north of Iran not far from Russia. It was a simple life. We farmed the land and hunted for our food. It was an excellent way to grow up, and I love my family and friends there and often miss them. The top sport growing up was Wrestling. There were so many great wrestlers to come out of the region of Iran where I grew up. We had such great traditions and such amazing coaches. My brother is now one of the coaches for the Iranian National Greco Team. I learned to wrestle from a young age. If you didn’t wrestle you weren’t respected. I did well in Iran, and at a young age – American High School age – I became Junior Freestyle Champion and represented Iran in other countries starting with a big tournament in Turkey.

Q: When you relocated from Iran to the United Kingdom, how difficult was the cultural transition initially?

It was a challenging experience, Dean. I spoke no English, and learned by speaking. I excelled in Wrestling there and they knew I was a top Iranian wrestler. I went on to become captain of their national freestyle team for Olympic Games and World Championships. That was an amazing experience and I learned English, and I still speak British style English because that is where I learned the language. The Queen’s English as some call It.

Q: You currently reside in the United States. Do you believe that you are living proof of the American Dream being alive and well?

I love America, and am now focusing on the real estate business. It has been an amazing experience working in real estate. We are buying and remodeling homes, then reselling them. It is truly great business. I also became an American citizen recently. From fighting in the WEC and UFC to working in real estate and coaching MMA, I have had such an awesome life here in USA. I am also hosting a podcast called Fighters Drinking Coffee with a couple of my students. They are great hosts and have allowed me to be a part of this project. We talk about MMA, Pro Wrestling and current events. I have also trained to become a pro wrestler, and am looking forward to doing that too, but not full-time. My real estate business is my top priority and training for my upcoming fight with ONE FC, Asia’s largest promotion.

Q: How much overall have you learned in training with Relson Gracie, Phil Cardella, Neil Melanson and UFC Hall Of Famer and “The Expendables 2” Hollywood Actor Randy Couture?

I always learn from everybody. I learn a lot from so many people. I learned so much from Pat Miletich, Erik Paulson, Relson Gracie, Billy Wicks, Neil Melanson, Laren Umphlett (one of the legendary Karl Gotch’s last students), Phil Cardella and Randy Couture. My style for grappling in MMA is Wrestling and Submission wrestling or Catch Wrestling. I also studied Jiu-Jitsu for years and I learned how to incorporate their submissions into my Submission wrestling game. I learned first and foremost though from my Wrestling coaches like Abbas Jadidi from Iran who wrestled Kurt Angle in the Olympic Finals, and so many other great coaches. I love coaching so much, and I work hard with Matt Granahan and John Shaddock to create SICS. SICS is my own fighting system that we certify coaches and students through the American Combat Association.

Q: ONE Championship is based in Singapore. What are the fundamental differences in working with Dana White and Victor Cui?

I love ONE Championship and I also loved my time in UFC. WEC was an amazing time also. Dana (White) And Victor (Cui) are both intelligent business men. To me, it does not matter as much who I fight for, but that I receive the best possible training.

Q: Which athlete inspired you most when you were growing up?

My biggest hero was a man named Gholamreza Takhti. Takhti was a hero in Iran. He was an Olympic Champion and an amazing wrestler, but he also cared about the people Of Iran. He was a legend. Also, my father was such an amazing influence on me. My father taught me to “Never fear the man that drilled 1,000 moves one time, fear the man that drilled one move 1,000 Times”. My father was an amazing wrestler, and my brothers also. I come from a family of top Champion wrestlers, and that has driven me my entire life.

Q: What initially prompted you to transition into the world of Professional Wrestling?

When I first moved to the USA, I met Matt Granahan, who is now one of my best friends. I trained with Matt when he lived in Texas, and I helped him get ready for competing, and we became very good friends. When I first met Matt, I did not know what to think of him because he had a crazy mustache that went down to his chest and was over 250lbs at that time. He looked like a Pro Wrestler. He first came Into CTC, the MMA gym I trained out of in Austin, wearing a cowboy hat and a crazy shirt that said “I Will Stretch You And Make You Holler”. I did not know that Matt (Granahan) was also a Pro Wrestler, but he Looked like a Pro Wrestler and was very good at promos. Matt and I used to watch Iron Sheik promos together, and I knew Iron Sheik was an Olympic Wrestler from Iran, and did crazy videos on YouTube. In the last year or so, I told Matt I wanted to try Pro Wrestling. Before one of our Amateur Wrestling clinics In South Carolina, Matt brought me to train with the boys at Double Cross Wrestling In South Carolina. It was Amazing!! I have learned so much from those guys and I love it. I respect Professional Wrestling. It Is Hard. In fighting, you are protecting yourself, but in Pro Wrestling your life is in your opponents hands. You are giving up your body, and they can hurt you. I love Pro Wrestling, and hope to do more in USA And Japan.

You never know, but I think It’s possible. I used to train with Ronda. You never know what’s going to happen in a fight. If Ronda does retire soon, she has a career set up already with Hollywood and WWE.

Q: Can you touch on your unique experience when you represented Great Britain in Freestyle Wrestling?

It was an amazing experience. As I mentioned, In Iran we wrestle our entire lives. As captain of the National Freestyle Team in Great Britain, I acted somewhat as a Coach, although not officially. I love to help people learn Dean, and in that case I had amazing athletes who I could show the Persian style to.

I was involved in starting the American Combat Association with Matt Granahan. Erik Paulson actually helped us a lot. At the time, Matt was living in Austin, but going to California for work and training with Erik (Paulson) at his CSW, a top MMA gym where Josh Barnett trains. Matt and Erik became good friends and were working on a book together which is still for sale called “Rough And Tumble”. I had trained with Erik also, and he was explaining to Matt the business side of CSW, his system that he certifies Coaches in. Erik gave Matt the idea to work with me to create SICS. American Combat Association was created to promote SICS, and Matt did some Instructional DVD’s with me and Erik Paulson. We started doing clinics and then Matt added Dan Severn and now Phil Baroni. The ACA (American Combat Association) has always been dedicated to preserving the history of Wrestling. The “Rough And Tumble” book that Matt and Erik (Paulson) did was all about that, and I helped them and have a chapter in the book.

I mentioned I learned from Billy Wicks. Matt introduced me to Billy Wicks, a legendary shooter who took on all comers in Carnies, but he was also a Professional Wrestler later in life and a Defensive Tactics Director for Memphis Police. I was unable to go with Matt And Phil Baroni to the NWA legends Fan fest last month, but they told me about it. It is the largest Pro Wrestling fan fest in the USA, and many of the top Pro Wrestler’s told Matt and Phil that they were excited to see more shooters going into Pro Wrestling. We agree with Josh Barnett that this is best for Pro Wrestling and we have always been a part of that movement. With Dan Severn, me, Matt and Phil, we will always bring respect and true Wrestling. American Combat Association will continue to be focused on the best coaching clinics and building SICS, but we will also be a part of the Pro Wrestling world.

Q: Which female Mixed Martial artist do you believe can become the next major star in the sport?

Paige VanZant seems to be very popular, and I wish her the best. Miesha Tate was also very good.

Q: What aspirations do you have in the near future?

The real estate business is a new venture for me. It is exciting and each new day is another learning experience. I would also love to get into coaching Wrestling. I have wrestled all over the world, and I have so much to teach. I know all of the different styles of the world. I am coaching now, but if given the opportunity to coach for an Olympic training center or major university, I know I could do a great job.