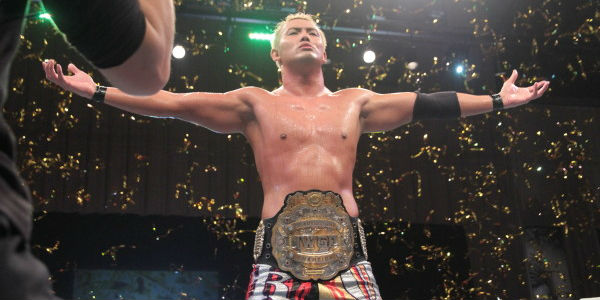 Kazuchika Okada – who is married to popular TV Asahi Presenter Yoko Mori – has competed in many classic matches in the orient against the likes of “The Phenomenal” AJ Styles, Prince Devitt, “The Machine Gun” Karl Anderson, “The Cleaner” Kenny Omega, Hiroshi Tanahashi, Tomohiro Ishii, Katsuyori Shibati, Naomichi Marufuji and Genichiro Tenryu to name a few marquee household names in Japan.

Kazuchika Okada will main event the much-awaited Wrestle Kingdom 12 – the most prestigious event in the Japanese professional wrestling calender – inside the world famous and atmospheric 60,000 capacity Tokyo Dome where the very talented Okada will defend the IWGP Heavyweight Championship against the very talented Tetsuya Naito in what is destined to be a must-see match for the ages between two of the biggest talents in the business today.

Q: Kazuchika, you most recently became the longest-ever reigning IWGP Heavyweight Champion in the history of New Japan Pro Wrestling thus surpassing a long-standing record previously set by the legendary and late-great Shinya Hashimoto. What does the monumental record of officially being the longest-ever IWGP Heavyweight Champion mean to you both professionally and personally?

OKADA: Honestly, I don’t hold it as such a monumental achievement. Some day, somebody will beat my record. I think if somebody that good came along, that’d be a great thing.

Q: It has been officially announced that you will defend the prestigious and sought-after IWGP Heavyweight Championship against Tetsuya Naito in the much-awaited main event showdown at NJPW Wrestle Kingdom 12 thereafter Naito defeated Tomohiro Ishii at NJPW King of Pro Wrestling inside the Sumo Hall in Tokyo, Japan. What are your thoughts on Tetsuya Naito and do you believe the showdown at NJPW Wrestle Kingdom 12 will be your biggest-ever match to date?

OKADA: Japanese wrestling is getting steadily more popular, and I want to take that spark and really make it blow up. When (Tetsuya) Naito and I faced each other in the ring after my match in Ryogoku, the energy was electric. The fans were fired up, and I was fired up, too.

Q: What separates your most recent battle with Evil at NJPW King of Pro Wrestling in comparison to your other battles with him?

OKADA: Well, I felt he definitely has the will to win. But there’s a difference in experience levels between me and him, and that showed in the match.

Q: Last but not least Kazuchika, what can NJPW fans around the globe come to expect when you face Tetsuya Naito at NJPW Wrestle Kingdom 12?

OKADA: I want people to see just how great New Japan Pro Wrestling is. WWE is spectacular, sure, but New Japan brings something different and special, and I guarantee you’ll see that with me and Naito at Wrestle Kingdom 12.