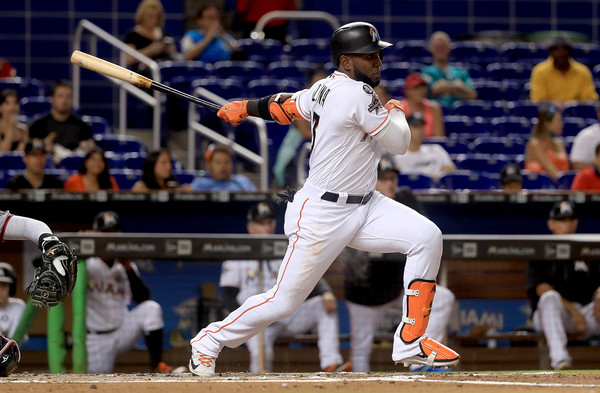 After the Cardinals missed out on their top target (Giancarlo Stanton) they settled for plan B. Although it’s tough to call a guy who hit 37 home runs and had 124 RBI a “plan B.” Congratulations Cardinals fans, Gold Glove winner and All-Star Marcell Ozuna will be coming to an outfield near you this season.

LAKE BUENA VISTA — The Cardinals acquired the 27-year-old early in the afternoon on Wednesday, and will reportedly be sending their fourth ranked prospect Sandy Alcantara to Miami along with two or three other minor leaguers. Contrary to reports earlier in the day that the Cardinals would have to include one of their major league outfielders and another top pitcher to swing a deal for Marcell Ozuna, it appears that Alcantara will be the only top talent headed to Miami.

Last season we heard all about how the Cardinals were missing an impact bat to really put them over the top and now it appears they have him. In Ozuna the Cardinals get someone who just had his best year as a pro, hitting .312/.376/.548 with big power an OPS+ of 145 and great defense. That all equates to a player who was worth nearly 6 wins above replacement.

The deal was reported hours ago and seeing as we don’t know the names of the other prospects yet it appears that Alcantara will be the biggest name St. Louis gives up, and even if Ozuna regresses a bit (which is likely) that is still a solid deal for a two-time All Star with two years of control left.

The biggest takeaway here though is that the Cardinals still have plenty of pieces to swing another deal. Jack Flaherty, Alex Reyes, Luke Weaver, Tyler O’Neill, Harrison Bader and others all remain on the roster.

The Cardinals are not done yet though, as with the acquisition of Ozuna the outfield at Busch Stadium becomes quite crowded with incumbents Tommy Pham, Dexter Fowler, Stephen Piscotty and Randal Grichuk still around. But that situation may be clearing up in the near future.

The Oakland A’s are reportedly trying to acquire Piscotty’s services, and despite a down year that saw him play just 107 games and hit .235 Piscotty still has the talent to be an impact player and may just need to get healthy. Regardless the Cardinals will still be adding a new prospect or two to their pile of prospects to include in other future deals.

Can you say Manny Machado?

After the trade was completed reports started coming out that the Cardinals were still checking in on multiple trade fronts, including potential deals with the Baltimore Orioles and Tampa Bay Rays. The Orioles have been taking calls on Machado all week and we know the Rays are always willing to dangle Chris Archer. With the Cubs still a threat and atop the NL Central it is clear that St. Louis is trying to go all in on trying to return to the playoffs and to their spot atop the division.

The price for Machado would be steep, but if John Mozeliak and the Cardinals front office could get an affirmative on the superstar signing an extension in St. Louis then they’d have to think about including Alex Reyes in any potential deal.

Fortune favors the bold right? Although usually a conservative club the Cardinals are showing the willingness to make big moves this offseason and time will only tell how the rest of their plans shake out. But thus far Cardinals fans should be excited.

It’s only Wednesday and there’s still a lot of time left in these Winter Meetings. Who knows what else could happen?