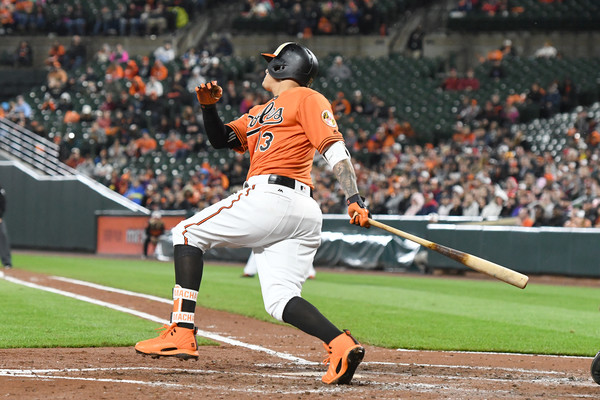 As time went on, on Wednesday night into Thursday morning, the Chicago White Sox emerged as the top suitors for Baltimore Orioles third baseman Manny Machado.

LAKE BUENA VISTA — Machado has been rumored to be a part of trade talks with multiple teams including the New York Yankees, Philadelphia Phillies, St. Louis Cardinals, San Francisco Giants and now the White Sox. The White Sox reportedly have been the “most aggressive” in talks to acquire the 25-year old third baseman, according to The Athletic’s Ken Rosenthal.

The most intriguing thing about the entire ordeal is that Baltimore has received a dozen offers for Machado, according to USA TODAY Sports’ Bob Nightengale. No offer is as strong as the offer made by the White Sox:

The #Whitesox not only have made a strong bid for #Orioles 3B Manny Machado, but actually have made the best offer of the dozen offers the Orioles have received

Baltimore is looking for pitching in any potential trade that they make while shipping away Machado. Luckily for the Orioles, the White Sox have a litany of pitching prospects at their disposal including Michael Kopech and Dylan Cease, and a young Major League pitcher in Lucas Giolito who could also be on the move.

Kopech, 21, is the top pitching prospect in the White Sox organization. Last season, between Double-A Birmingham and Triple-A Charlotte, Kopech pitched to 9-8 record with a 2.88 ERA and a 1.169 WHIP. Kopech possesses a fastball that sits in the high 90s and occasionally reaches 100-mph.

Cease, 21, pitched with both low-A Kannapolis and high-A South Bend in 2017. Though his record was 1-10, Cease showed that he could salvage his campaign, pitching to a 3.86 ERA and a 1.264 WHIP. Cease also has an extremely strong fastball, topping out in the 100s at times.

Giolito is 23 and has 11 Major League starts under his belt already. Though he struggled initially with the Washington Nationals (0-1 record, 6.75 ERA in 21.0 innings), he bounced back with the White Sox. He pitched to a 3-3 record with a 2.38 ERA and 0.949 WHIP in 45.1 innings. His potential is there, he may have just needed a change of scenario from the Nationals.

Nightengale also mentioned that St. Louis made an incredibly strong offer as well, but not as strong as the White Sox’s offer:

The #STLCards have strong offer as well for #Orioles Manny Machado, but not quite as strong as #Whitesox proposal

For as much fuss as many have made about the Orioles possibly dealing to the Yankees, New York probably can’t match with the same type of prospects that Chicago can. However, Nightengale also mentioned the Yankees, Giants and Phillies alongside one another as suitors for Machado.

The #Yankees, #SFGiants and #Phillies also are among the bids for #Orioles Manny Machado

Getting the Deal Done

The other question that has arisen in these trade talks is how long will it take to trade Machado, if he’s traded at all. Apparently, the answer is at the end of this week. With the MLB Winter Meetings winding down, the Orioles will look to find the top return on Machado.

If Baltimore can successfully move Machado for a number of prospects, they could chose to go in the direction of a full re-build. Center fielder Adam Jones, closer Zach Britton and setup man Brad Brach are also set to become free-agents after the 2018 with Machado. There’s a possibility that Baltimore’s brass thinks that its opportunity to win with this group intact is up. However, each aforementioned player could be a valuable piece elsewhere and could net a solid return.

On the bright side for O’s fans, if Baltimore were able to acquire prospects for their expiring veteran’s contracts, the could save enough money to give second baseman Jonathan Schoop an extension. When Machado leaves (which seems like a forgone conclusion at this point), Schoop will be the face of the franchise and he will be able to be paid as such.

Schoop, 26, had his best season as a pro in 2017 slashing .293/.338/.503, hitting 32 homers and driving in 105 runs. When now Los Angeles Angels second baseman Ian Kinsler signed his deal as a 30-year old with the Texas Rangers, he received a 5-year/$75 million deal. As Schoop is four years younger than Kinsler was at the time of his signing, he may receive nearly $100 million and an extra year or two.

Breathe a sigh of relief Baltimore.