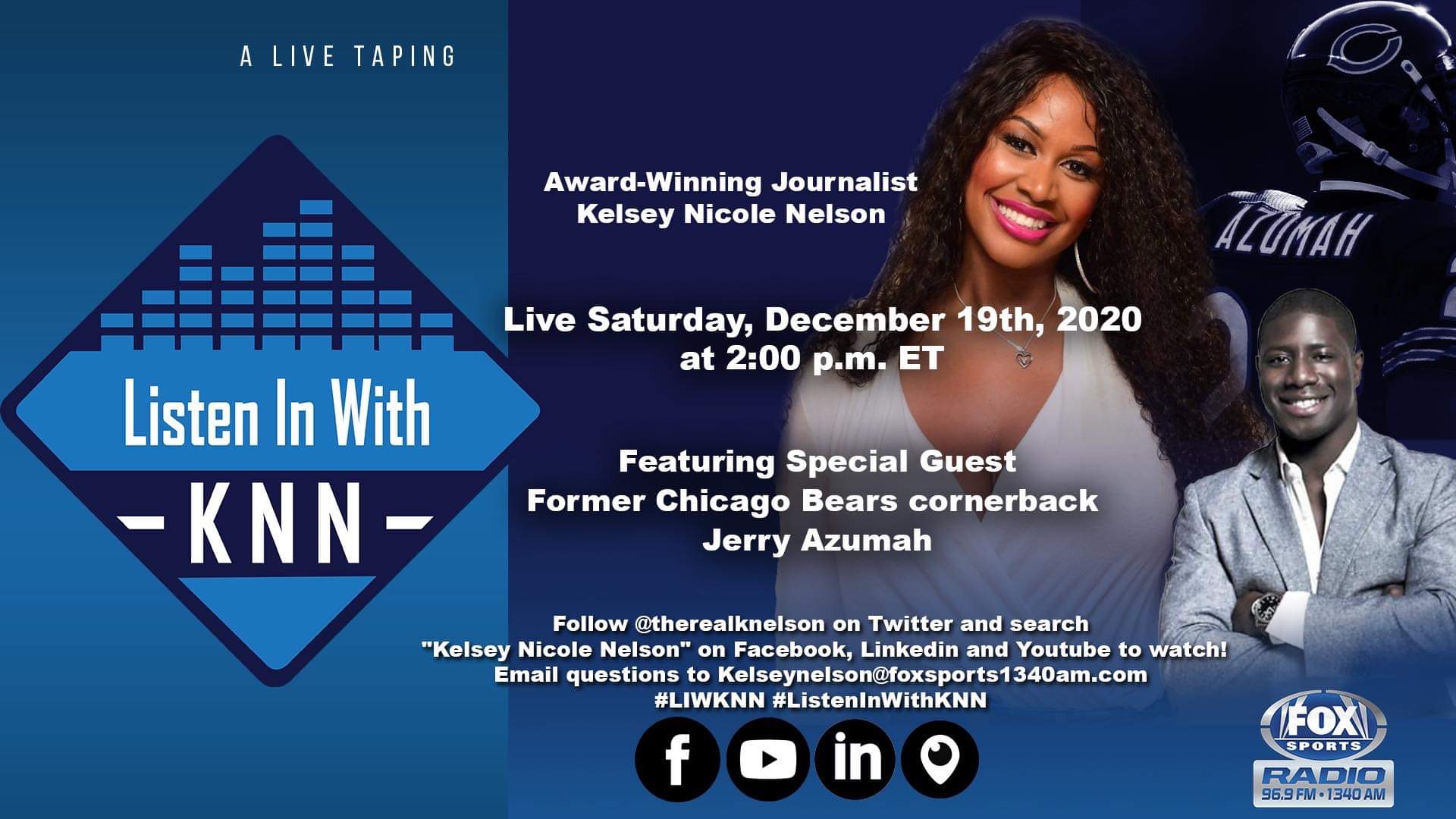 On the latest episode of Listen In With KNN on Fox Sports 1340AM, host Kelsey Nicole Nelson welcomed former Chicago Bears cornerback Jerry Azumah to the show.

Speaking of his journey, he was born in Del City, Oklahoma as his parents were immigrants from Ghana and eventually grew up in Worcester, Massachusetts. Azumah’s father was a big sports fan and got him into playing soccer. One day, he started hitting people with a soccer ball and realized that football was the sport for him.

“All the kids in my area that I grew up with played football or baseball. Football was the number one sport and I just got into it and fell in love with it. All my friends in the area were instrumental in pushing me to get into football,” Azumah said. “I’m glad that they did because I really enjoyed it.”

He attended Saint Peter-Marian High School, which was a football powerhouse and spent the first three years battling for playing time at running back. Then, Azumah got the opportunity to start and erupted during his senior year in which he garnered attention from Division I-AA schools like the University of New Hampshire. Azumah decided on going to UNH because of their successful run-first offense.

“I had an opportunity to start right away and everything just lined up for me the way I wanted to. I wasn’t thinking about the professional ranks at that time. Chip Kelly was my running backs coach and was very instrumental in making me the football player that I was back in the day. UNH was the perfect fit,” he said.

Azumah ran for over 1,000 yards in each of his four seasons with the Wildcats and won the Walter Payton Award during his senior year. Despite his collegiate accomplishments, he learned a valuable lesson in learning how to communicate and work with his teammates for a common goal.

“That was a very valuable lesson that I learned at UNH. Our coaches always preached that we need to come together, figure out certain things and keep all the negative stuff outside the locker room. Everything is a common goal and it helped me become successful today,” said Azumah.

After his college career came to a close, he attended the NFL Combine and there were whispers that he would be switching positions to defensive back. Azumah had a couple of private tryouts in college and a couple of teams worked him out as a defensive back.

“That was a very pivotal moment for me because my whole mindset was geared towards running the football and being on offense. I had to completely erase it out of my mind and focus on defense, which is something that I’ve never done before,” he said.

Azumah was drafted in the fifth round (147th overall) in the 1999 NFL Draft by the Chicago Bears at cornerback. Although he had success as a running back in college, there were concerns about his size in being an every down back in the league. Before the draft, Azumah attended Boston College’s Pro Day and was approached by Phil Emory, who was a scout for the Bears and had him do some DB drills.

“He was very instrumental in drafting me and then at one point in time became the GM (general manager) for the Chicago Bears. It was very interesting how all these little elements work together and how they come to fruition,” he said.

Azumah spent all of his seven seasons with the Bears. In 2003, he was an All-Pro and a Pro Bowler as a kick return specialist. Additionally, Azumah had the opportunity to cover the top wide receivers in the game like Jerry Rice, Terrell Owens, Randy Moss, Steve Smith and Marvin Harrison.

His main advice to players, who have been asked to switch positions is to continue to work hard no matter what.

“Chances are they believe in your skills and talents. The first step you would have to do is mentally preparing yourself for the rigors of the NFL, staying focused on your craft and constantly learning. Those are the things I really held on to and constantly asking for advice so I can get better.”