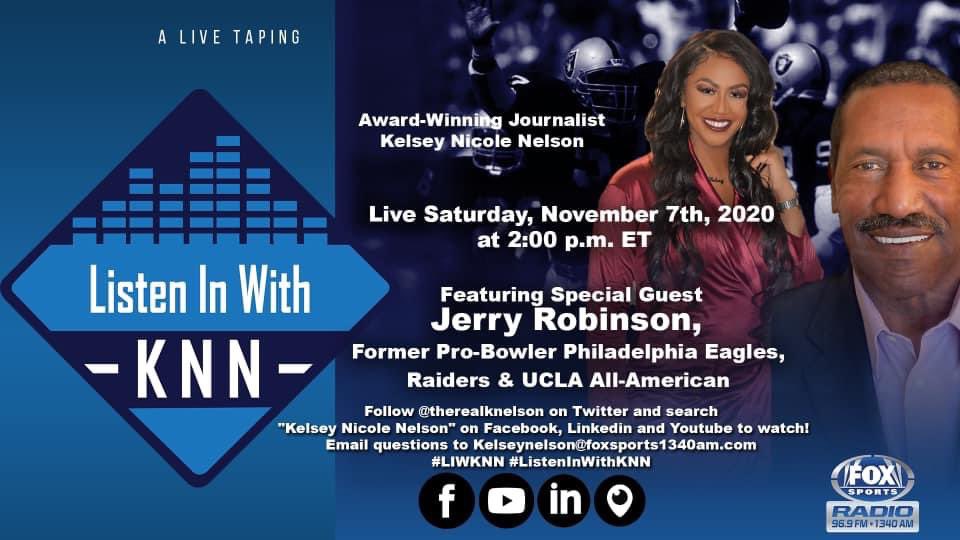 On the latest episode of Listen In With KNN on Fox Sports 1340AM, host Kelsey Nicole Nelson welcomed former UCLA All-American, Philadelphia Eagles and Los Angeles Raiders linebacker Jerry Robinson to the show.

The Santa Clara, California native attended Cardinal Newman High School where he was the captain of the football, basketball and track team. He didn’t like football as his first love was soccer and wanted to be the next Pelé. After watching his brother and his friends play football, Robinson decided to give it a shot.

“When I was in high school, I was taught fundamentals and techniques in football. The football thing worked out,” he said.

Robinson attended the University of California in Los Angeles where he was originally recruited as a wide receiver but switched to inside linebacker. He didn’t know anything about the linebacker position but that wasn’t going to stop him from living out his dream.

“At that point, it became a challenge for me because they don’t know what’s inside my heart. I loved the coaches that I had in Coach (Dick) Vermeil, Coach (Terry) Donahue and the person who drove me to break was my linebacker Coach (Jed) Hughes. He worked me harder than anybody,” Robinson said. “That UCLA experience was awesome because I have friends for life from that time in my college life and had a chance to grow.”

After his collegiate career ended, he became the 21st player overall taken in the 1979 NFL Draft by the Philadelphia Eagles. They were coached by Dick Vermeil, who recruited him to UCLA and noticed how passionate, knowledgeable and dedicated Eagles fans were.

“I grew up as a Raiders fan but once I became a Philadelphia Eagle, I saw the passion that the fans have for the team. While I was in Philly, the first game I ever played in the National Football League as a Philadelphia Eagle was a Monday Night Football game where I played inside linebacker against the Dallas Cowboys. We won and I had a really good game,” he said. “That first experience playing on national TV is something I’ll never forget.”

Robinson was traded to the Los Angeles Raiders in 1985 after spending his first six seasons with the Eagles. That trade to his favorite team growing up was another dream come true for him.

“As a young kid watching the Raiders come into my hometown for training camp, I became a part of them. I went inside the locker room and no one was in there. I looked around the Raider locker room and put on my helmet and cried,” Robinson said. “It was a spiritual experience.”

When his playing career ended, he got  inducted into the College Football Hall of Fame in 1996 after his stellar career at UCLA. He was a three-time first-team All-American in 1976, 1977 and 1978.

“When I hear about them, I earned those things by hard work and never giving up on my dream. It makes me feel really good and I couldn’t have done it by myself. It was an emotional thing because my kids and grandkids would be able to go to that College Football Hall of Fame and see their dad or grandpa.”