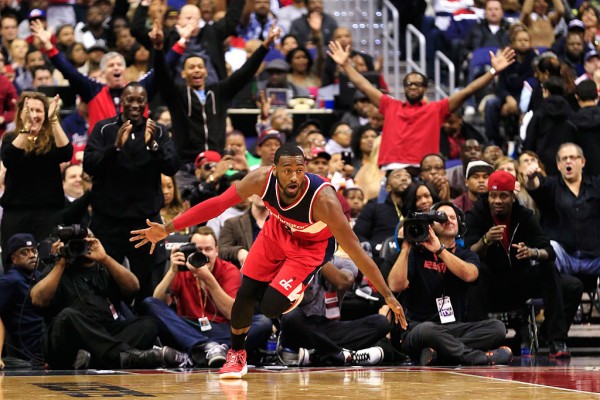 Last night, the Washington Wizards defeated the Philadelphia 76ers (Sixers) 109-93.  The victory put the Wizards over .500 (20-19).  If you didn’t watch the game and just looked at the score you would think that the Wizards just ran away with this game but that would be false.  Sixers’ center Jahlil Okafor did whatever he wanted to do in the first quarter, scoring nine points.  Wizards Center Marcin Gortat had issues guarding him throughout the quarter.  It didn’t get any better for most of the second quarter.  The Sixers jumped out to a 45-32 lead with 6:31 minutes left in the second quarter.  The Sixers’ fan base took over the Verizon Center, chanting the phrase “Trust the Process”—which is a saying used for Sixers Center Joel Embiid who didn’t play.  The Wizards looked sluggish and their own fan base had nothing to cheer for.  All of a sudden it happened, Wizards’ point guard John Wall took over and showed his superman game.

After being down 13 with 6:31 minutes left in the second quarter, Wall and Wizards outscored the Sixers 24-11, which included a key bank shot to tie the game (56-56) going into halftime.  Wall scored 11 points in the second quarter after only scoring three in the first quarter.   Now, that’s called showing up when your team needs you.  But that wasn’t it for the “Great Wall of DC”.

Wall hit a 3 point shot putting the Wizards up 74-62.  Then followed that up with two more threes.  Wall had three straight three-pointers which equaled nine straight points for the Wizards.  In the third quarter, from 4:13 to 2:32, Wall outscored the Sixers 9-3.  “The Great Wall of DC” closed out the Sixers in the third quarter and put the dagger in the hearts of Sixers fans who invaded the Verizon Center.  After the game, in his presser, Sixers head coach Brett Brown acknowledged that Wall took over the 3rd period.  He did! Wall scored 11 points in the quarter, helping the Wizards outscore the Sixers 30-15.  John Wall finished the game with 25 points and sat out the entire fourth quarter.

It’s amazing that not too long ago fans and pundits were asking for Wizards shooting guard Bradley Beal to be closer for this team.   The word was that Wall doesn’t have the jumper and skill set to close games out.  Well, this season John Wall has proven the haters wrong.  What he did last night and throughout this season lets you know that Wall is becoming that dude which no one wants to see when it’s 5-4-3-2-1.  Currently, John Wall averages 6.7 points in the fourth quarter which is 11th in the league.  The fourth quarter is your money quarter and Wall has been money.  Now granted, in Sixers game, Wall brought the fourth quarter to the third quarter.  His team needed their “superstar” to show out and he did.  This team needed him to end the game and he did.  That is the main element of developing that stone cold clutch gene.