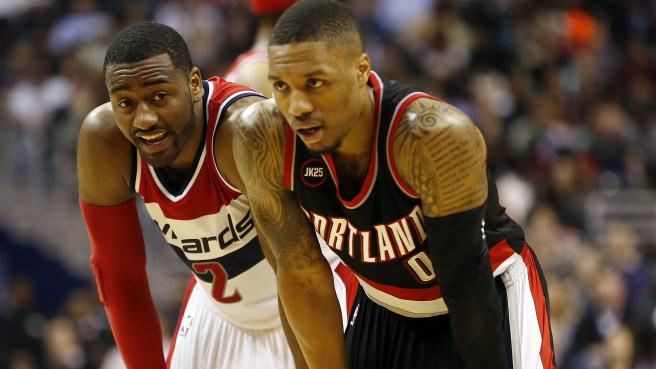 The Washington Wizards are once again back above .500 (20-19) after defeating the Philadelphia 76ers Saturday night. The win lifts them to fifth place in the crowded Eastern Conference. They’ll play host to the Portland Trail Blazers(18-24) tomorrow at 2pm as they look to win their 12th straight home game.

With a home record of 16-6, the Wizards are third only behind the Golden State Warriors and Cleveland Cavaliers in total home wins. On the other hand, the Blazers have a 7-15 record on the road and have won just six of their last 20 games.

No matter their record, the Blazers have a dynamic duo in the backcourt in Damian Lillard and C.J. McCollum to match up with Washington’s John Wall and Bradley Beal. It’ll require much more focus than they had to on Saturday against Philadelphia.

The Wizards have been famous for falling behind by double-digits early on this season. The same happened last game against a Joel Embiid-less Sixers squad. Wall credited the struggle to his lack of effort in the first quarter.

Wall is averaging 22.9 points, 10.2 assists, and 2.2 steals per game. He has clearly been the motor that makes the Wizards’ engine run efficiently.

Even with their struggles, the Trail Blazers remain in the playoff picture in the West. Defensive struggles have been the headline for why they have lost so often. They rank 27th in points allowed and 28th in defensive rating.

“I think we’re starting to see a little light,” Ed Davis said. “That’s all we need. We’re a team that, once we start playing with confidence, we get rolling and we get hot.”

The key for Washington in this game is to not allow Portland to get hot early. Like Davis said, they can be dangerous with confidence and with premiere scorers in Lillard and McCollum, seeing shots fall in early could result in a loss for the Wizards.

Otto Porter left Saturday’s game with a right hip strain, but stated he should be ready to go Monday.