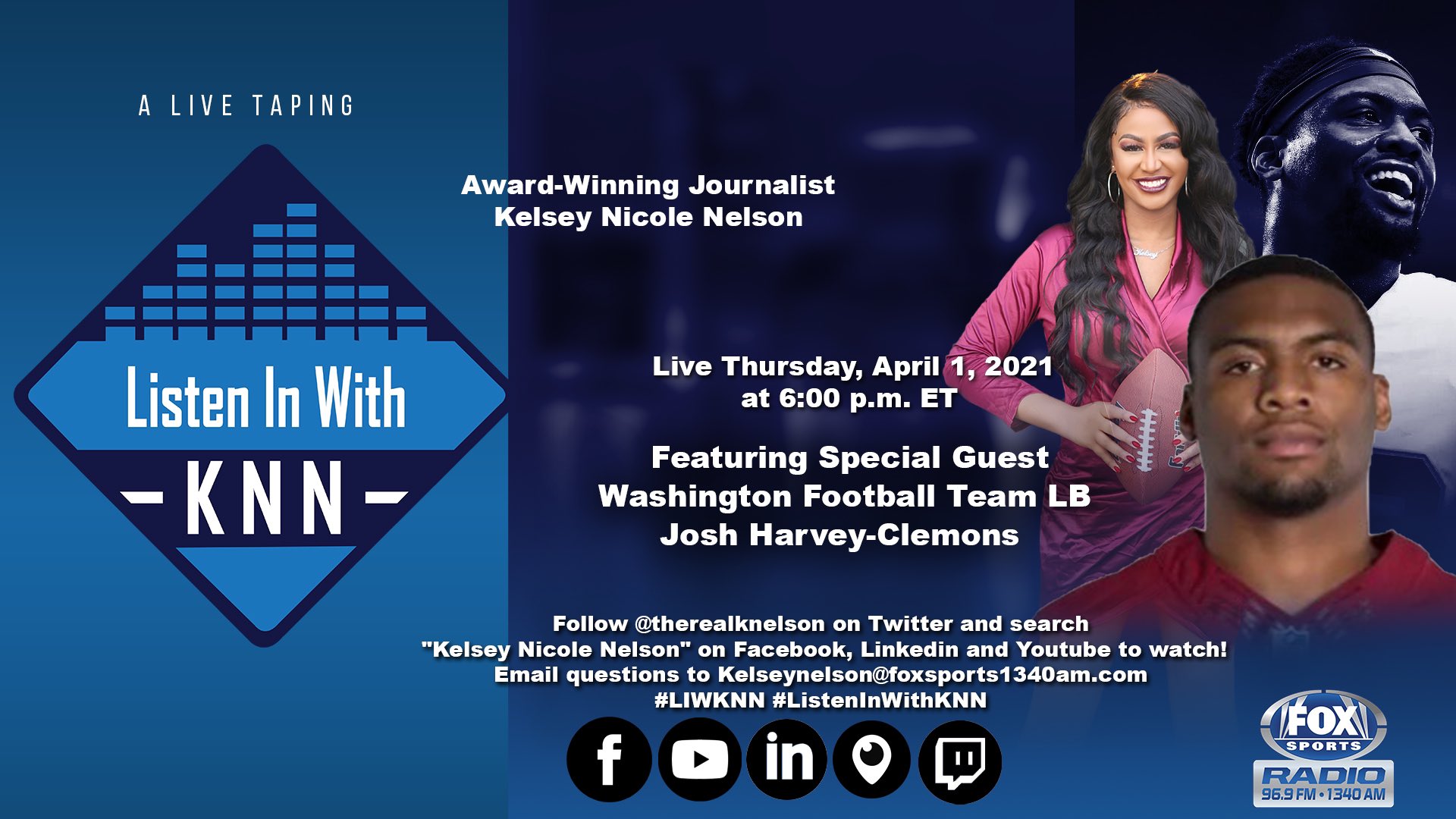 On the latest episode of Listen In With KNN on Fox Sports 1340AM, host Kelsey Nicole Nelson welcomed Washington Football Team linebacker Josh Harvey-Clemons to the show.

His football journey began in Valdosta, Georgia where he was born and raised in. Originally, Harvey-Clemons’ first love was basketball as his grandfather, uncles, mom and aunties played the sport. But when he attended Lowndes High School, he gravitated towards football because of his hometown and the fans.

With the advice from his grandfather, Harvey-Clemons played every sport year round and that taught him the work ethic he needed to be successful.

“When you go from football to basketball to track right after the school year, I’m going into AAU basketball all summer. I stayed busy and I was always doing something to keep myself busy. Ultimately, that helped me in the long run,” he said.

After high school, Harvey-Clemons attended the University of Georgia where he spent his first two collegiate years there before being dismissed from the team due to multiple violations. He transferred to the University of Louisville for his final college years.

Harvey-Clemons was selected by the Washington Football Team in the seventh round (230th overall) of the 2017 NFL Draft. Since he got to the league, he learned how to appreciate the game, put the time into his craft and learning everyday.

“When I first came in coming off my last year in college, everything’s going so fast. You’re coming straight from the combine and straight into the season. You’re just doing the little things that much better. Mentally, just being able to focus and cut out distractions,” Harvey-Clemons said.

In his career, he has made 41 tackles and 1.5 sacks in 35 games. After the 2019 NFL season, Harvey-Clemons went on a trip to Miami with his defensive teammates. After the trip, he wasn’t feeling well and went to the hospital where he was diagnosed with pneumonia. It had intensified because he suffers from asthma. That experience led the six foot four linebacker to opt out of the 2020 season to protect his health due to the COVID-19 pandemic.

“I was just thinking about my sons and I’m like, ‘if I felt like that, I can only imagine what it’ll do to them.’ I have an eight year old and a three year old. That’s basically what it came down to for me and then I have other family members that have problems too. It was a big family decision for me because we didn’t know right then,” he said.

Despite his absence, the Washington Football Team went through a transition with Ron Rivera being the head coach. As a result, they won the NFC East for the first time since 2015 in large part due to their defense as they were ranked second overall in yards allowed per game with 304.6 and fourth in points allowed per game. The unit is led by reigning Defensive Rookie of the Year Chase Young, Montez Sweat, Jonathan Allen and Daron Payne.

“Like they said, defense wins championships. The D-Line has been playing like that for years and then you add Chase Young. For the years to come, I feel like the defense is going to be top for a long time,” said Harvey-Clemons.

The linebacker recently announced that he will return for the 2021 season to add to an already stout Washington defense. He’s been anxious to get back on the field to play the game that he loves and is excited on what’s to come.

“It’s a great group and they have one thing in mind and that’s to win. That’s what we all should be on. I feel like they’re changing the culture there and everybody is on track and I love it.”