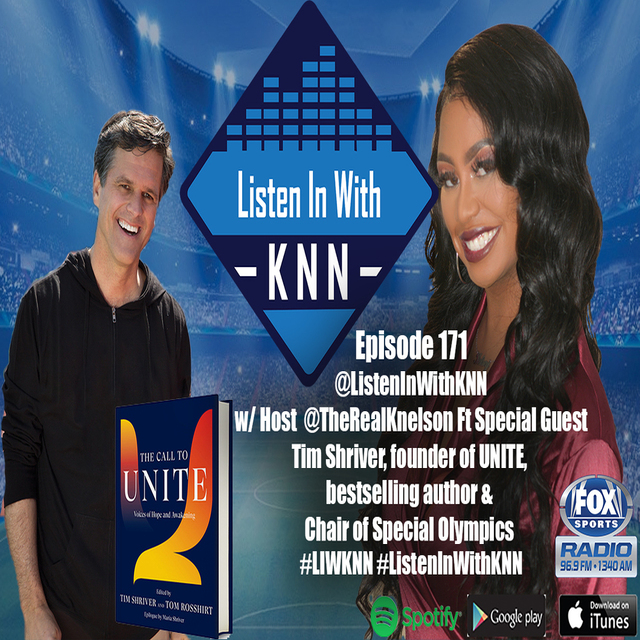 On the 171st episode of Listen In With KNN on Fox Sports 1340AM, host Kelsey Nicole Nelson welcomed Chairman of Special Olympics International Board of Directors and founder of UNITE Tim Shriver to the show.

Special Olympics has six million athletes that come from more than 200 countries and promote health, education and a more unified world through sports. He had learned some very important lessons in that wisdom comes from unlikely places and the importance of the athletes being themselves.

“The openness, trust and willingness to take a chance on each other is unrivaled. People who have experienced almost daily rejection and stand up every single day. In some ways, it’s the inspiration behind all of what I do. It’s 20 years of watching average men and women together with Special Olympics athletes heal division that makes me convinced without a doubt that we can do this,” Shriver said.

Special Olympics programs are starting to get back up and running in the midst of the COVID-19 pandemic. The local programs are in need of volunteers, contributions, coaches, people who are willing to set up tables, serve drinks, drive the minivans and pump up the basketballs. According to Shriver, the Special Olympics slogan is the inclusion revolution.

“We have to have compassion on each other and on ourselves if we’re feeling that animosity and fear. What the Special Olympics experience does is creates a setting for the encounter just to meet. Just cancel judgment and meet in a setting where you can just listen. Everybody is welcome here,” he said.

On March 16, 2021, he released his book called “The Call To Unite: Voices of Hope and Awakening” as it offers wisdom for hard times and it’s filled with prayers, poems, spiritual insights and lessons to live by. Shriver managed to get over 100 contributors for his book which includes Oprah, TD Jakes, Common, Jewel, Presidents Bill Clinton and George W. Bush, Julia Roberts and chef José Andres. It highlighted the hope, awakening and desire for unity and trust between people exists in all walks of life.

“You can’t take what you’re seeing on cable news as the only version of who we are. But the truth is a lot of us are struggling with a lot of pain and grief. The advice, wisdom, consolation and sense of solidarity. It’s quite an extraordinary collection of the best of our country,” he said.

It was important for Shriver to have people from all walks of life in the book to prove that unity is possible because so many people have shared hopes and dreams, shared beliefs and desires and shared pain.

“We wanted to point out that the people you think are impossible, intolerable, outrageous, terrible, losers, the other people, they’re saying the same thing you are. This was an attempt to remind us that we also can spend equal amounts of time broadening the circle of who we’re for. That’s part of taking a chance on people. My hope is that this book will help.”