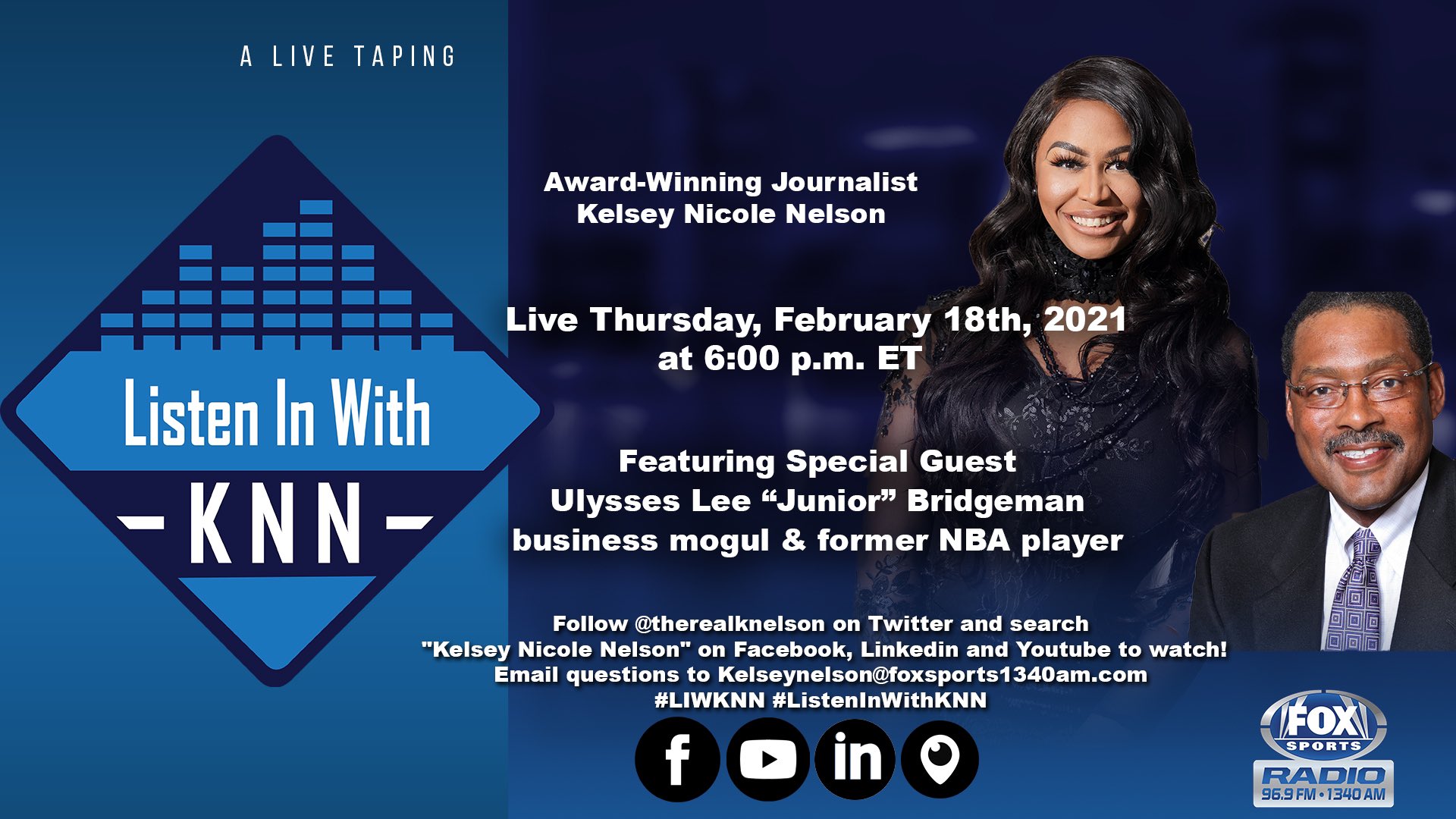 On the latest episode of Listen In With KNN on Fox Sports 1340AM, host Kelsey Nicole Nelson welcomed former NBA player and business mogul Ulysses Lee “Junior” Bridgeman to the show.

He was born and raised in East Chicago, Indiana as his father Ulysses was a second generation steelworker. In Bridgeman’s hometown, around 70 to 80 percent of people worked in the steel industry. It was also a melting pot where people got along with each other no matter their ethnicity.

“I went to school with people all over the world and you never looked at anybody any differently. That was a great advantage growing up in a society where everybody got along and basketball just happened to be the one that everybody wanted to do and be a part of,” Bridgeman said.

Speaking of basketball, he was a player on the Washington High School team. Bridgeman got his chance to play in his senior year when he led the Senators to an undefeated record and the Indiana state high school basketball championship. That title was a dream come true for the East Chicago native.

“East Chicago was not a big community but everybody was into the high school basketball team. For us to win the championship and go undefeated was a dream come true. It’s something that everybody felt a part of. At a young age, it made it feel like you were important because we won the state championship in Indiana,” he said.

As a result, Bridgeman got a scholarship to attend the University of Louisville where he played under head coach Denny Crum. He won the Missouri Valley Conference Player of the Year twice and led the Cardinals to the Final Four in 1975. They lost to UCLA in the National Semi-Final on a last second shot in overtime. Despite falling short of a title, he enjoyed his three-year college career at Louisville.

“The three years I was there, I think it really established the program as one of the best in the country. One of the things I was most proud of was when we had 32 seniors, 28 of them got their degree in four years and it was unheard of at that time. It shows you not just the type of basketball player but the type of young men that (Crum) had recruited and we had on the team back then,” said Bridgeman.

The six foot five forward took his talents to the NBA where he was selected with the eighth pick in the 1975 Draft by the Los Angeles Lakers. However, he would be on the move as he was shipped to the Milwaukee Bucks in exchange for Kareem Abdul-Jabbar. While with the Bucks, Bridgeman was the sixth man and holds the record for most games played with the organization.

“I was fortunate in Milwaukee to play a long time with some really good players and good people. I remember almost after every road game when we get to the hotel and me and five to six other guys eat dinner together. The biggest testament to that is the fact that we’re still friends and still talk to Lloyd Walton, Sidney Moncrief, Bob Lanier, Marques Johnson, Brian Winters and Quinn Buckner,” he said. “We’re still in communication after all these years and it’s a friendly that was developed in our playing days.”

After spending nine seasons in Milwaukee, Bridgeman was traded to the Los Angeles Clippers in 1984 where he spent two seasons with the team before finishing out his career with the Bucks again. During his playing career, he worked at Wendy’s in the offseasons to supplement his basketball income. During that time, Bridgeman learned the business model of Wendy’s and purchased five of its restaurants after his playing career.

Recently, he made another investment as his company, Bridgeman Sports and Media bought Ebony Media Operations after the company went bankrupt. Growing up, he would read Ebony magazines and saw this as an opportunity to rebuild the monthly magazine.

“Those were the things that went through my mind and there’s a generation out there that doesn’t understand this and we got to get them to understand what Ebony meant to so many people. The name is still iconic but there’s a number of ways that you have to go at Ebony. They should be told because it’s not just the history of Black Americans but it’s a history of America,” Bridgeman said. “That’s what we were trying to protect from being lost and to have a secure place, which we’ve found out that has every publication of Ebony and Jett going back 75 years.”

His advice to today’s NBA players is to make as much money as they can so it can last for generations.

“You have to be able to set a plan and to be conservative. Don’t get involved in things you don’t know about and things you can’t control yourself. Play as long as you can and you’ll have plenty of time to invest. There’s no reason in today’s game that guys shouldn’t leave the game with so much money that they can pass that down to the next generation.”