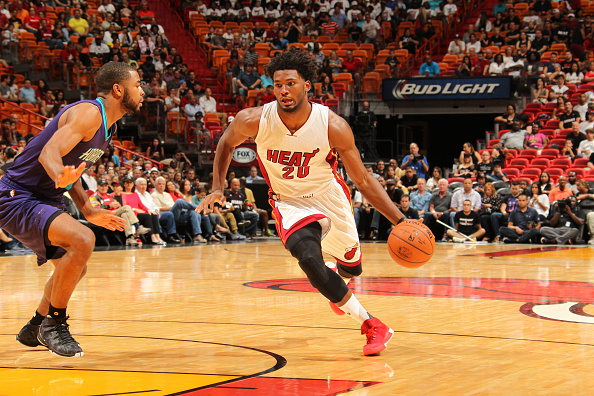 Justise Winslow will be out of commission for the rest of the season, because of a torn labrum. This will be his consecutive year that he has not been healthy. The Miami Heat are 11-26 this season and have been struggling with keeping their key players healthy.

Winslow is the heart and soul for the Heat, since Dwyane Wade left and went to the Chicago Bulls, Winslow has showed the Heat fans, as well as the organization that he is improving and could dominate on the defensive end of things.

He is averaging over 10 points per game shooting 35.4 percent from the field. Despite his horrific 20 percent from three point land,  he has strengthen the Heat on the defensive side. This year the Heat ranked 25th in the rankings, but averages around 5.7 blocks and 6.8 steals a game.

Without Winslow on the floor, Miami will have to find someone that can stretch out an offense the way that Winslow does. He has quick feet, the ability to help out on the weak side, and has the ability to change the momentum of the game.

Somehow Miami has to get defensive stops in order to get some W’s in the win column. They are letting their opponents score an average of 101 points on them.

There is a lot of questions surrounding Winslow and his ability to maintain his health. There have been a lot of critics that have asked when will the Heat trade him for someone else. Miami has not seen much with Winslow, because of back to back injuries that kept him sidelined for two years, but when he has gotten the opportunity to be back on the floor he has improved the Team’s net rating to 4.6.

Miami has a greater chance to get to the playoffs with him on their team, but time will tell.

The Heat will have to decide if they should keep or trade him to get someone that is healthy.