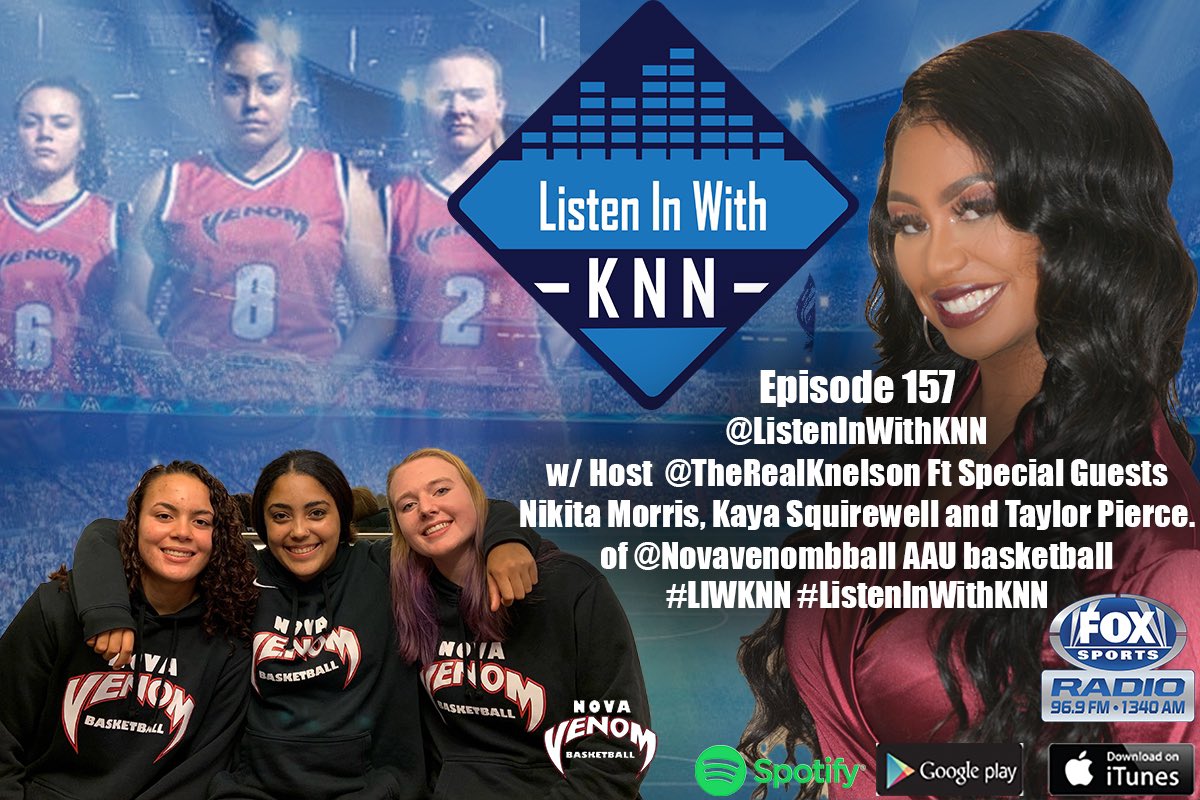 On the 157th episode of Listen In With KNN on Fox Sports 1340AM, host Kelsey Nicole Nelson welcomed Kaya Squirewell, Nikita Morris and Taylor Pierce from the Nova Venom Basketball AAU Girls team to the show.

Nova Venom is a premier Girls AAU basketball organization located in Northern Virginia. It has a very family oriented atmosphere with the players being close on and off the court.

“We’re all about all for one and one for all and that’s something our coach says to us almost everyday at practice. It’s more than just a game and these friendships will last forever. I think it’s great to know that we have each other and will always be there for each other no matter what,” said Squirewell.

Nova Venom is coached by Marchello Squirewell and the top players are Kaya Squirewell, Nikita Morris and Taylor Pierce. Squirewell is described by her coach/father as having a high basketball IQ and playing hard on both ends of the court. The senior is nicknamed “Baby LeBron James” and “Baby Kevin Durant” as she is Nova Venom’s all-time leading scorer.

“It feels great just knowing that all my hard work is paying off especially with a big thing like that. I’ve always worked hard to be the leading scorer and having that title is such an honor,” Squirewell said.

While she was growing up, Squirewell played soccer, baseball and swimming despite not having a passion for them. Then, she got into basketball and fell in love ever since.

“I really wanted to pursue this and that’s how my love was into it. I’m glad that my parents are very supportive in what I love and if it wasn’t for them, I probably wouldn’t even looked at basketball,” said Squirewell.

Nova Venom’s other senior, Taylor Pierce is the team’s captain and wears jersey number two on Nova Venom. She’s described as a hard worker who always gives 100 percent and is one of the best teammates. Her nicknames are “The GOAT”, “The Enforcer” and “The Technician”.

“The title captain means a lot that I’m able to not only help my sisters but lead them through example and cheering. I like being able to lift up the team and having that position of leadership to show them,” Pierce said.

Like her teammate, Pierce played different sports like soccer, volleyball and softball but eventually got engaged to the game of basketball.

“Throughout it all, basketball was the one sport that I always stuck with. It just became a part of me in how much I loved the game and want to continue in the future,” said the team’s captain.

Junior Nikita Morris is described as a tough on-ball defender, great rebounder and can finish in traffic. She was an honorable mention for the All-NOVA Girls sophomore team and won the Nova Venom Rookie of the Year award as a freshman.

“It feels great because all the hard work that I have been putting in ever since elementary school up until high school has paid off. I’m never gonna stop working to perfect my craft,” Morris said.

This will be Squirewell and Pierce’s last year with Nova Venom as they will head off to college but their legacies with the program won’t be forgotten.

“When I leave this program, I want everybody to know that I will always be here even 20 years from now. I would love to coach younger girls and teach them the little things,” Squirewell said. “I would love to be remembered as someone who helped build the program because I was there from day one. I always want to be remembered as someone who gave all my effort and left everything I had out on the court,” Pierce said.