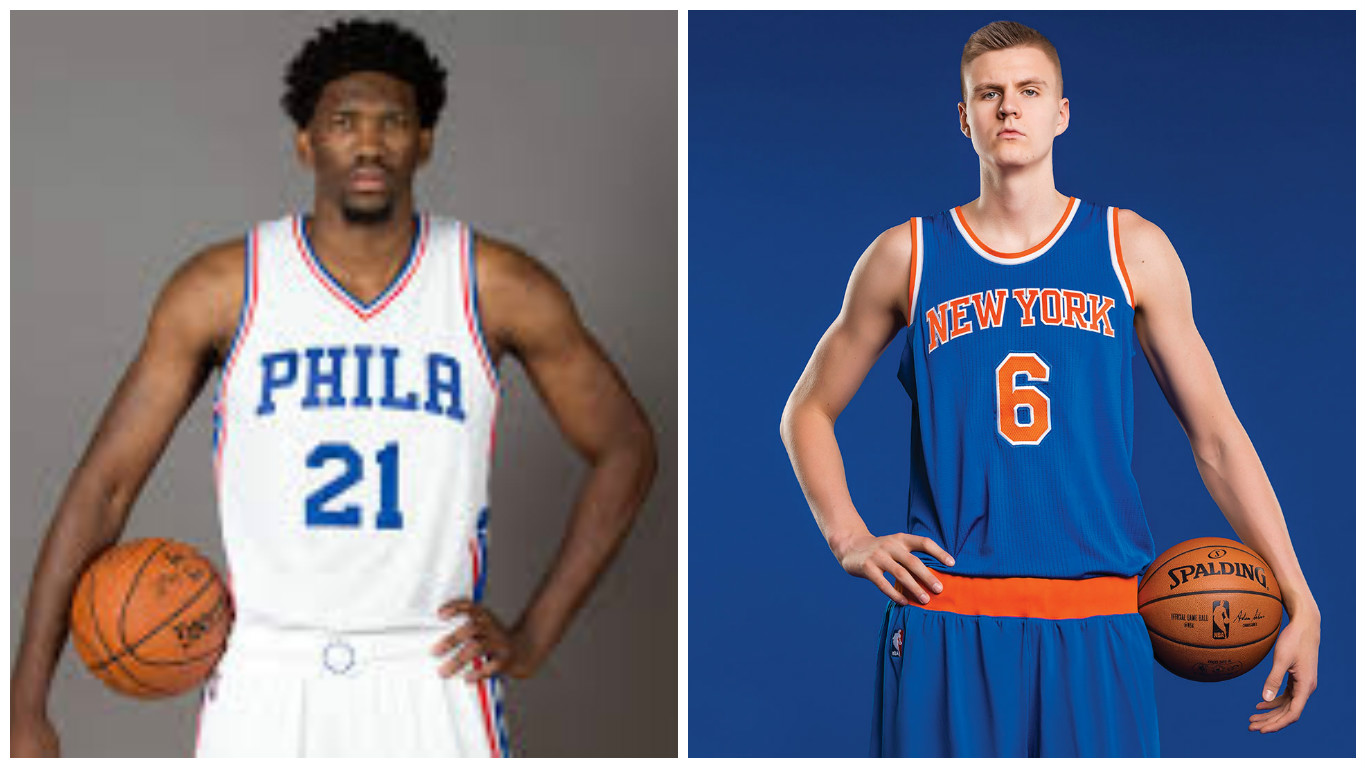 On the outset, the January 10 matchup between the New York Knicks and Philadelphia 76ers may appear as battle between two struggling franchises. Neither team is currently in playoff contention, yet avid fans and hoops gurus are anticipating the game. The reason for excitement lies in bigs Kristaps Porzingis and Joel Embiid squaring off.

Both franchises are rebuilding, making a return to their respective days of glory at a snail’s pace. But these two young men, Porzingis, 21, and Embiid 22, represent potential. Both are skyscrapers in height, with the small-ball skill sets to shine in today’s game. Ironically, both took similar journeys to get here. Written off early, both are silencing critics and gaining fans.

While the Knicks continue to slum, Porzingis continues to shine in his second season. Presently, Porzingis is averaging 19.8 points per game, along with 7.6 rebounds and 2 blocks. The Latvian prodigy is in contention to be an all-star, something deemed unimaginable by many on draft night. The Knicks selected Porzingis with the 4th pick in the 2015 draft, to the displeasure of many. Knicks fans and critics alike proceeded in bashing the pick, citing the unfamiliarity of the overseas prospect. Even analysts like ESPN’s Stephen A. Smith bashed Porzingis before his first game. Nevertheless, “3-6 Latvia” continues to evolve before our eyes, exhibiting skills uncharacteristic of a 7’3 man.

In 2014, the Philadelphia 76ers drafted Joel Embiid with the third pick of the night. In one year as a Kansas Jayhawk, Embiid flashed unprecedented potential, drawing legendary comparisons. The lasting one is to Hall of Fame center Hakeem Olajuwon, innovator of the “Dream Shake”. Unfortunately for Sixers fans already suffering through years of obscurity, a foot injury prevented Embiid’s unveiling. Embiid’s avid social media commentary was a tease to fans suffering through consecutive horrid seasons.  That wait accumulated into two long, losing seasons for the Sixers. Nevertheless, Embiid is healthy and excelling in his opening season in the city of brotherly love. Similar to Porzingis, Embiid’s averaging 19 points, 7 rebounds and 2 blocks. In less than half a season, Embiid’s already breaking records. On January 9, Embiid became the first NBA player with six-straight 20 point games in less than 30 minutes.

While neither team is ready to compete for a championship or Eastern Conference Finals showdown, the matchup is a preview of a bright future.