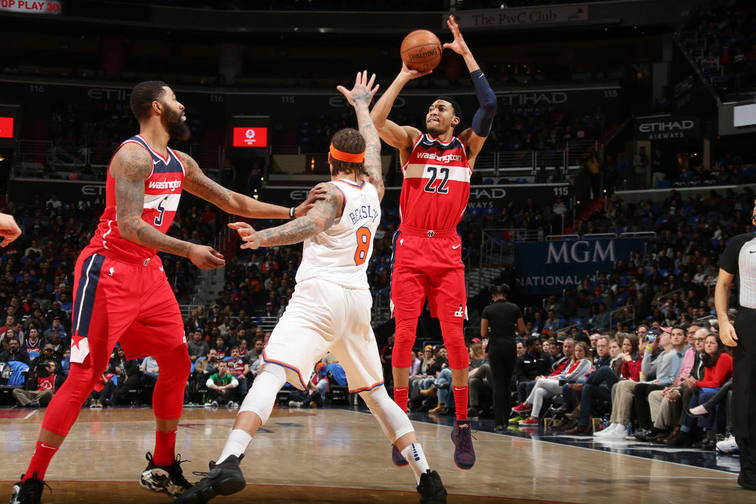 WASHINGTON- On another night of tribute for the city of Washington, celebrating the 40-year anniversary of the legendary 1978 Washington Bullets championship team, the Wizards couldn’t get the job done against the New York Knicks losing 101-97 at home.

Urgency has been a point of emphasis for Coach Scott Brooks’ team and part of that lack of urgency was attributed to the Wizards’ inability to knock down simple shots, shooting 42.5% from the field.

Despite the stat line, the Wizards could have potentially won this game tonight. With 42 seconds remaining in the fourth quarter, the Wizards were up 95-94 with possession. Kelly Oubre Jr., missed a three pointer that would’ve maximized the Wizards’ lead and Knicks’ Trey Burke went down the court for a three point play, fouled by Oubre. The Wizards never saw the lead again after that possession.

Coach Brooks described Oubre’s foul on Burke as a teaching moment and said, “We can’t continue to give and-ones. We probably lead the league [with] almost three a game. That situation where you have an extra defender because, I think, it was Lance Thomas in the back court, so we have to communicate. We can’t foul in that situation. We can’t do it.”

When I asked Bradley Beal on his thoughts regarding Oubre’s decision to go for the three instead of holding out he said, “He was open. If he had made it, we would have been like ‘aww, yeah, that’s a great shot.’ Because he missed it, we are going to try and analyze one way or another. He could have brought it out or whatever, he could of ran a play knowing time or score at that point, that’s probably the best, but at the same time, he was wide open. It’s a learning lesson for him. It’s not his fault that we lost the game.”

It’s getting a bit too late in the season for these teaching moments, especially considering the reality of the Wizards’ nine game remaining schedule and their current sixth standing in the Eastern Conference.

The Wizards face the San Antonio Spurs on Tuesday at home and there is one thing for sure, the anticipation for John Wall to return to the lineup is at an all time high with the Wizards’ playoff hopes dangling in front of their eyes.