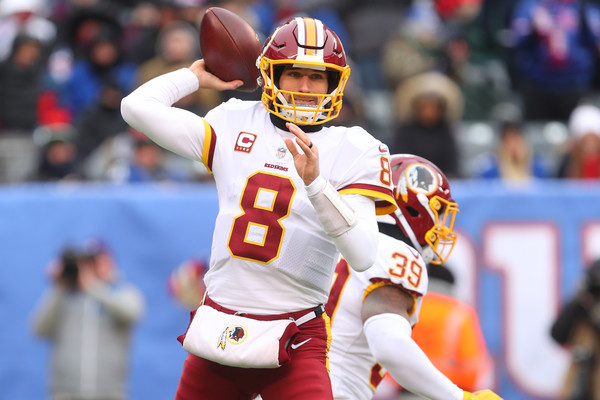 The first wave of free agency has passed, and many NFL teams are now boasting shiny new additions.

Kirk Cousins received the biggest deal in NFL history, Tyrann Mathieu was unceremoniously released from the Arizona Cardinals, and several other high-profile names changed their threads. But who came out on top looking the best for the 2018 season?

There are some happy folks in Minnesota these days. Chief among them is Kirk Cousins, who just signed the first fully-guaranteed deal in league history. Cousins nets himself $84 million just by putting pen to paper, and also gets to escape the wasteland that has become the Washington Redskins. Cousins moves to a team that was one win away from the Super Bowl, has one of the league’s top defenses in place and a supporting cast of talented playmakers like Dalvin Cook and Stephon Diggs.

Minnesota meanwhile gets one of the most consistent quarterbacks in the NFL. Cousins has started all 16 games each of the past 3 seasons, passing for over 4,000 yards and accounting for at least 29 touchdowns in each of those seasons as well. Case Keenum had a good year for the Vikings in 2017 but it was by far the best season of his career. Keenum’s best is Cousins’ norm and for the Vikings that means another 3 years of Super Bowl contention.

Other Winners:Ryan Pace and the Chicago Bears

The Bears entered the offseason coming off another disappointing season and fired John Fox swiftly. They then hired former Kansas City Chiefs offensive coordinator Matt Nagy even faster. Looking at the free agent market the Bears didn’t have to chase Cousins, or Case Keenum, not even a rental like Sam Bradford. The Bears have their quarterback in Mitchell Trubisky. Trubisky showed flashes of how good he can be despite his pedestrian season. With the worst receiving corps in the league and an offensive line that was never quite stable Trubisky still was able to flash the athleticism, big arm and brain that made him the second overall pick a year ago.

With Vic Fangio’s defense, two dynamite running backs and an offensive mind for a head coach all that was left for Ryan Pace was to get Trubisky and Nagy the weapons to help them succeed. Pace moved quickly, signing star receiver Allen Robinson from the Jacksonville Jaguars, burner Taylor Gabriel from the Atlanta Falcons and Super Bowl hero tight end Trey Burton. While all three are valuable and talented, Robinson is the big prize. The dynamic receiver is coming off a torn ACL but Robinson recorded 1,400 yards and 14 touchdowns just two years ago when we were still wondering if Blake Bortles was even qualified to be in the NFL. By swinging big Ryan Pace is setting up the Bears for a quick return to contention, and they still have the eighth overall pick to use next month.

It seems weird putting the reigning Super Bowl champions in here, but the Eagles didn’t stand pat after winning it all. Instead they added a huge defensive force in Michael Bennett, who will join with Fletcher Cox and Haloti Ngata to make one of the most fearsome defensive fronts in football. Getting speedster Mike Wallace is also a boon to the offense as he should be able to fill the role that Torrey Smith never did. The Eagles are also getting back a guy named Carson Wentz. You know, the guy who was leading the MVP race before going down with a knee injury.

The Rams ran out to a surprising 11-5 season last year after head coach Sean McVay transformed the offense and turned Jared Goff back into a quarterback. The Rams improved their roster almost from the start. They acquired one of the league’s top corners in Marcus Peters, then got another solid corner in Aqib Talib. Those two moves alone made the Rams big winners and set them up nicely for 2018 but LA wasn’t done. They flipped Robert Quinn and Alec Ogletree, two bloated cap hits, for picks and cap space for the future. They let Sammy Watkins walk but that won’t hurt the offense as Goff and Watkins never really clicked. All in all the Rams kept most of their solid defense intact and then some, and have a handful of picks to attack their areas of need in the draft.