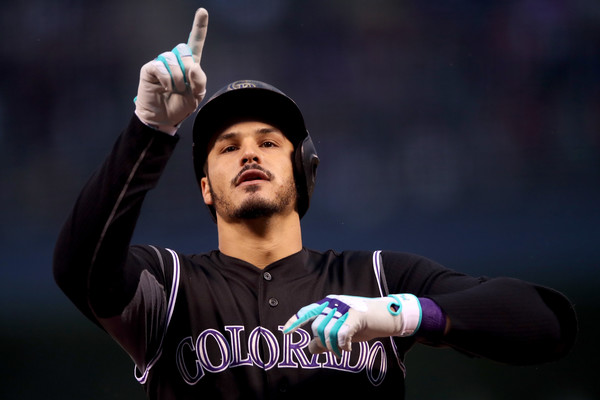 Opening Day is right around the corner. It’s so close and America’s Pastime is just about to start.

Everyone is starting to get that itch for competitive baseball. We’ve had enough of watching the prospects get their action or pitchers getting 3 innings of work. We’re ready for Jon Lester vs Marcell Ozuna, we’re ready to watch Giancarlo Stanton and Aaron Judge, we’re ready to see what Shohei Ohtani has.

With the coming of regular season baseball it’s projection season, and fans rush to the internet to see what PECOTA has predicted for their favorite team. Disclaimer, PECOTA is far from perfect. After all it’s just an algorithm that makes it’s best guess on how a team will do. The system always shortchanges the Baltimore Orioles, over-inflates the Yankees, and is sometimes just plain weird. That’s what we’re here for today, to pick out some of the weird projections PECOTA has spit out this year.

So without further ado, some projections to laugh at:

Go ahead and take a minute to read that a couple more times, and then laugh hysterically. That’s what I did anyway. There’s no explaining where PECOTA got this number from. This past offseason the Rays blew it all up, trading Corey Dickerson, Jake Odorizzi, Steven Souza Jr and franchise cornerstone Evan Longoria. Then Jose De Leon and Blake Snell went down with major injuries. That leaves the Rays with a core of Kevin Kiermaier, Chris Archer and Wilson Ramos. We can safely assume Archer will be traded come August too.

This talent-deficient roster isn’t even the biggest of Tampa Bay’s problems, lest we forget that the Rays are in the same division as the juggernaut Yankees and Red Sox, plus the above-average Blue Jays. Even the Orioles are a threat to hang a crooked number on anyone. The Rays are going to be the punching bag of one of the league’s best divisions and PECOTA for some reason sees an 83 win season?! Tampa will probably be lucky to win 70.

Neither the St. Louis Cardinals nor the Milwaukee Brewers will crack 85 wins

Part of what makes this projection laughable goes back to Tampa Bay. Yes, the Rays are in a different league than the Brewers and Cardinals, but PECOTA has St. Louis just two wins better than the Rays and the Brewers just a single win better. Last season St. Louis won 83 games with a whole lot of “meh” on their roster outside of Tommy Pham. They now have Marcell Ozuna, a full season of Paul DeJong, a healthy Dexter Fowler and Adam Wainwright looks like his old self in spring training. PECOTA has the redbirds winning just 85 games, which seems like a lowball number given the adjustments and improvements the Cardinals made. They should win more like 88 games.

The Brewers now, are being absolutely dragged through the mud by PECOTA, which actually expects Milwaukee to get worse in 2018 despite adding Christian Yelich, Lorenzo Cain and Boone Logan. Don’t get it mixed up, the Brewers have their warts, especially on the pitching side, but they will be an offensive force for sure, and will play good defense for their pitchers. This is at least a 86 win team again, and if they perform up to their potential and possibly add an arm at the deadline 90 wins isn’t crazy.

This may be the craziest of all. The Rockies made the playoffs last year as Wild Card, winning 87 games. The thing is they didn’t lose any of their main contributors, Jon Gray is set to only get better, Nolan Arenado is still around and Colorado even added Wade Davis to replace Greg Holland. So how does PECOTA have a 9 win drop off? Impossible to say. The Rockies will be around 85 wins again in 2018, if not better. Their young pitching staff will only get better, Arenado is still and MVP-caliber player and David Dahl is ready to burst onto the scene after a 2017 that was plagued by injuries. Will they make the playoffs again? Well that’s harder to say because the Wild Card race will be more crowded with the Cardinals and Brewers entering the mix to join the Diamondbacks, Mets and possibly Phillies. But Colorado won’t be below .500 much less fail to even reach 80 wins.

PECOTA has the Chicago Cubs at just 92 wins, which seems low given their additions of Tyler Chatwood and Yu Darvish plus a new-look bullpen and a healthy season from Wilson Contreras. 95+ wins doesn’t seem crazy for the Northsiders.

The Boston Red Sox are also being lowballed at 89 wins, despite the addition of JD Martinez and a full season of David Price, who looked phenomenal when he came back late last season. Rick Porcello can’t possibly be as bad as he was last year either. The Red Sox are at the very least a 93 win team again.

Lastly, the San Francisco Giants are currently projected for 83 wins, but with the injuries to Madison Bumgarner and Jeff Samardzija, that seems even more unlikely than it was before.