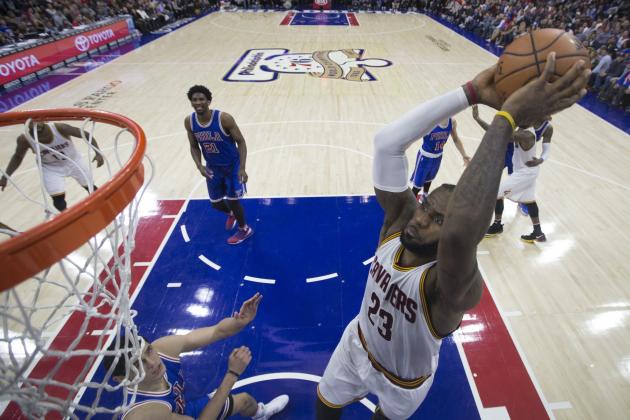 The Face Of The Cavs

Whenever LeBron James name is brought up in a conversation it is a heated debate. LeBron James came into the league with massive pressure as a high school prodigy and LeBron was drafted by his hometown Cleveland Cavaliers with the first overall pick in 2003 NBA Draft.

LeBron James always had the weight of Cleveland on his shoulders ever since he was in high school. Therefore he was mature beyond his years due to the massive exposure that he would receive on game days. LeBron James gave the Cavaliers a face and instant credibility to them as a franchise.

In addition for the first time ever he made the Cavaliers must watch TV. LeBron James flourished in the NBA quickly in the NBA, he put his greatness on display when he took in the Cavaliers to the NBA finals in 2007. However, they had no business being there because there were only a few quality pieces that were around LeBron James. The outcome would prove that my statement was correct as they got swept 4-0 by the San Antonio Spurs.

Then it came the summer of 2010 where LeBron James had enough of losing. LeBron James made the 2010 offseason all about himself with ESPN “The Decision” when he announced that he would take his talents to South beach and the Miami Heat.

This made James an instant villain in the eyes of NBA fans and the media. Lebron paired up with his brothers Dwayne Wade and Chris Boston as created the second super team.  They took the blueprint from the Boston Celtics when they formed their own super team in 2008 with Paul Pierce, Kevin Garnett, and Ray Allen. The Celtics big three was able to defeat the LA Lakers in six games to win the NBA 2008 Championship. The Miami Heat thought this formula would succeed right away but it took some time.

The Dallas Mavericks shocked the world when the pulled off a massive upset victory over the Heat in 2011. Keep in the mind that the Heat was up 2-1 in the series and they lost in seven games. The Miami Heat made the NBA Finals for four straight years from 2010-2014.

Which is an impressive achievement but in my mind, I still view it as a failure because LeBron James and the Miami Heat only managed to win two NBA Championships first in 2012 against the Oklahoma City Thunder in five games. LeBron James, another NBA Championship was back in 2013 against the Spurs, however, if it was not for Ray Allen who hit that clutch three-pointer that was able to tie the game Lebron James would only have one NBA Championship.

Then LeBron James changed his fate and rewrote his own history when he decided to go back home to the Cleveland Cavaliers. LeBron James went from public enemy to a hero overnight and everything was instantly forgotten. When he signed with the Cavaliers, he wrote a letter to the fans he promised to bring an NBA Championship to the city of Cleveland.

Injuries in the NBA Finals

The Cavaliers decided to trade Andrew Wiggins to the Minnesota Timberwolves for Kevin Love. This would form another deadly big three with LeBron Love and Irving. Again LeBron James was able to take his team to another NBA Finals appearance. This time it was against the Golden State Warriors. However, luck was not the side of James and the Cavs Kyrie Irving and Kevin Love was out with injuries.

The Cavs still managed to be up 2-1 in the series but they fell short to the Warriors in six games. However, James averaged 36 points, 13 rebounds, and 9 assists per game for the NBA Finals so, therefore, I gave him a pass in 2014.

During the 2015–16 season was an up and down season for the Cavs. As a result, David Blatt was fired in the middle of the season, Tyronn Lue moved from an assistant to the head coach. Despite all the adversity, the Cleveland finished the year with 57 wins and the best record in the East.

In the NBA finals, it was a rematch between the Cavs against the Warriors. However, this time it was a different series. The Cavs were down 3-1 to a Warriors. James responded by registering back-to-back 41 point games in Games 5 and 6, leading the Cavaliers to two consecutive wins to stave off elimination.

In Game 7, he posted a triple-double and made a number of key plays, including an iconic chase-down block on Andre Iguodala in the final two minutes. Then Kyrie Irving iced the game with a three over Stephen Curry. This win was massive for Cleveland because this was their first sports title in 52 years and they became the first team in NBA history to come back from a 3–1 series deficit in the NBA Finals history. LeBron James came through on his promise to bring a Championship to Cleveland.

LeBron James just needed two points against the Philadelphia 76ers to tie Hakeem Olajuwon, for 10th on the NBA’s all-time scoring list. He achieved this did just that in the first quarter. James has now scored 26,946 points and counting in his unbelievable career. It took James 993 career games to get into the top 10th overall on the all-time NBA scoring list, that’s a much quicker than Olajuwon, it took him 1,238 games.

The stats were provided from the NBA