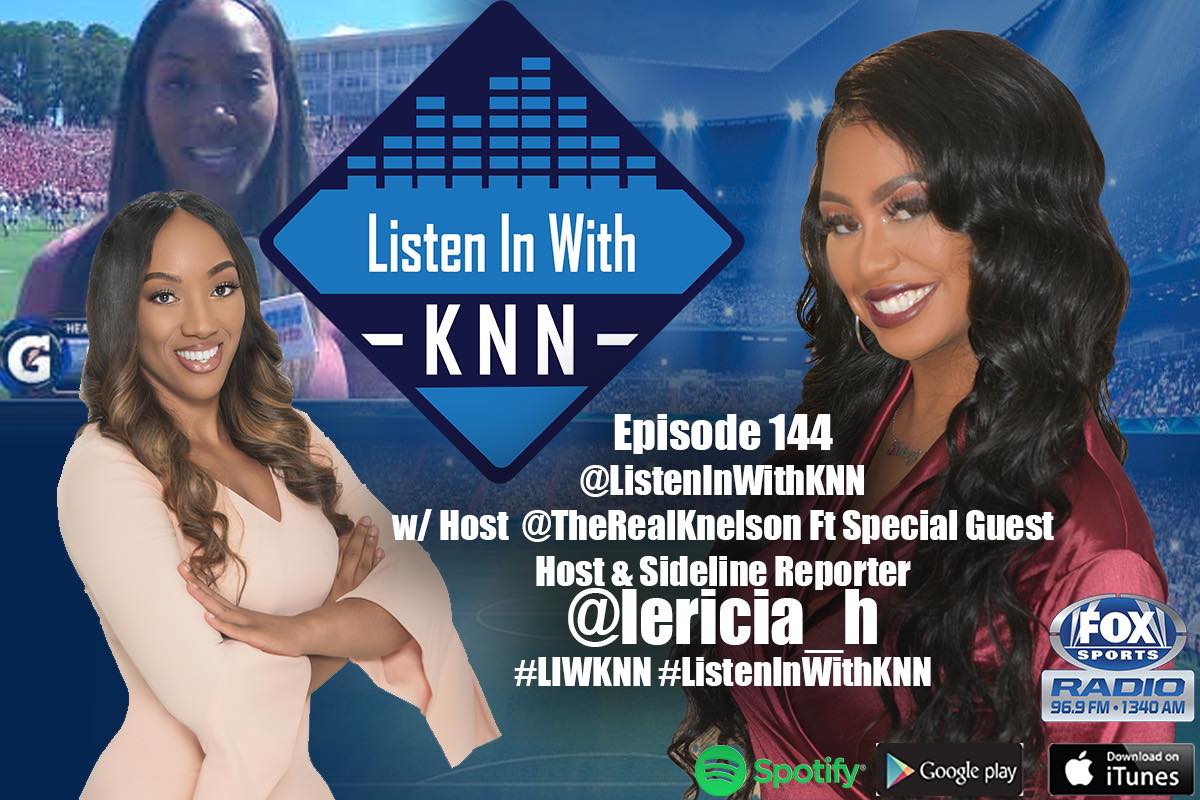 On the 144th episode of Listen In With KNN on Fox Sports 1340AM, host Kelsey Nicole Nelson welcomed sports reporter and host Lericia Harris to the show.

Her journey started at an HBCU called Bethune-Cookman University where her passion for sports journalism took place. She became the first sports reporter in the school’s history and was part of a crew that started the first sports network that streamed all of the sporting events for the institution.

“For me to be a part of that and start and establish a lot of different things while I was on campus meant a lot to me,” Harris said.

After graduating from Bethune-Cookman University, she went to the University of Florida for her Masters. While at Florida, Harris was a full time grad student and a Graduate Assistant for the women’s basketball team and served at their local station WCJB TV20. Then she went off to Orlando to work in the ESPN Complex and landed in Atlanta as a college football sideline reporter.

Speaking of Orlando, the NBA resumed their 2019-20 season in a secured Bubble and as a result have zero coronavirus cases. Harris has commended the stance that the players have taken during COVID-19 and the Black Lives Matter movement.

“We’ve seen all the players take a stance with this, whether you agree with what they said or what they’ve done. We’ve seen that effort put forth every single game, practice, press conference to push forth the awareness of Black Lives Matter and police brutality,” she said. “For me, that’s been the highlight of the bubble because it’s what we need right now. They (NBA) have mastered this bubble.”

Another league having success on and off the court in the bubble is the WNBA. The players have been at the forefront in bringing attention to social issues like their opposition to Atlanta Dream co-owner Kelly Loeffler for her stance against Black Lives Matter.

“I actually think that the WNBA has done a great job in their response, particularly the Atlanta Dream. What they’ve done to push forth the social justice movement and making sure that Breonna Taylor’s case isn’t ignored. I’m excited to see what more they’re going to do,” she said.

As a college football fanatic, Harris is hoping for a college football season despite the big conferences like the Big Ten and the Pac-12 postpone their fall sports seasons because a lot of people’s livelihoods are connected to this sport.

“ I am thinking about the players and like Trevor Lawrence mentioned in one of his tweets, ‘A lot of these young men who play, this is a love and a mental freedom for them.’ I’m hoping that the various conferences that have yet to give a final decision that they’re able to come up with a way where they can be proactive and protect the student-athletes,” she said.

Harris advises the universities to continue to pay attention to the best interests of the student-athletes.

“I saw a list of what these players want and how they feel about it. They are starting to listen. There might be some sort of solution even if there is a short season.”