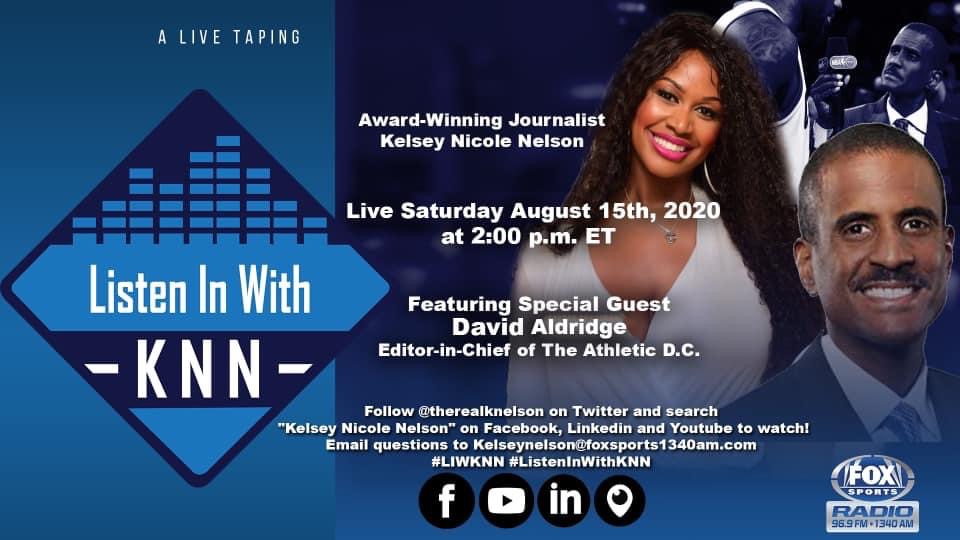 On the latest episode of Listen In With KNN on Fox Sports 1340AM, host Kelsey Nicole Nelson welcomed Editor-in-Chief of The Athletic D.C. David Aldridge to the show.

As a sports media personality, he worked for Turner Sports, ESPN, NBA TV, Washington Post and the Philadelphia Inquirer. As a result of his work, Aldridge won the Curt Gowdy Media Award by the Basketball Hall of Fame in 2016.

At The Athletic D.C., the Washington D.C. native covers and writes feature stories about D.C. sports. One of the teams is the Wizards, who finished their regular season by going 1-7 in the Bubble during the NBA restart without their top players.

“They didn’t have (John) Wall or (Bradley) Beal or (Davis) Bertans, who’s their best three point shooter. Thomas Bryant was a bright spot and Troy Brown showed some really good signs going forward. I was a little disappointed in Rui Hachimura as I thought he took a step back,” Aldridge said. “At least you can imagine what next year will be assuming Wall and Beal are back healthy.”

As for the Washington Football Team, they retired the “Redskins” nickname in the aftermath of the killing of George Floyd and the rise of social movements. For Aldridge, getting rid of the name was long overdue which could lead to a new beginning for the Burgundy and Gold.

I think anybody who followed them over the years was just aghast at the on-field product. The off-field code of silence that they had were their key people never talk to the media about anything. It was an incredibly toxic environment for women. It was just about stubbornness and why would you alienate a large swath of the people that you want to be your fans,” he said. “They had to change all of that.”

In addition to his reporting career, Aldridge was interviewed in the famous docuseries “The Last Dance” talking about the Chicago Bulls’ 1997-98 championship season. The thing that stuck out to him was how competitive the NBA was in the 1980’s.

“That’s what made it compelling and at the heart of that competition was those teams that really did not like each other. That created some incredible competition and if you look at a box score and you see the final score 88-85, you might go ‘well how good could’ve it been, they only made 3 three pointers.’ They got some sense of what those rivalries were like back in the 80s,” he said.

When the NBA restarted their 2019-20 campaign in a Bubble in Orlando, Florida, Aldridge admits that he had doubts that it would work. But to his surprise, the season has been going well without any disruptions.

“These are very different circumstances than they’re used to playing in. Shooting in an arena you’ve never shot in before. That’s not easy. I give them credit. To see some of the young guys come through and make a name for themselves has been pretty cool,” he said. “I like the idea of virtual fans and I understand why they’re doing it. I did love the Suns having their families introduce the starting lineup which was really sweet.”

Aldridge predicts that the Los Angeles Clippers will face the Milwaukee Bulls in this year’s NBA Finals.

“They (Clippers) haven’t had Montrezl Harrell there the whole time, barely had Lou Williams and Patrick Beverly’s been out too. They’ve had a lot of their guys not there so I don’t think they’re anywhere close to playing their best basketball yet. When they’re locked in defensively, I don’t know how you score against them.”