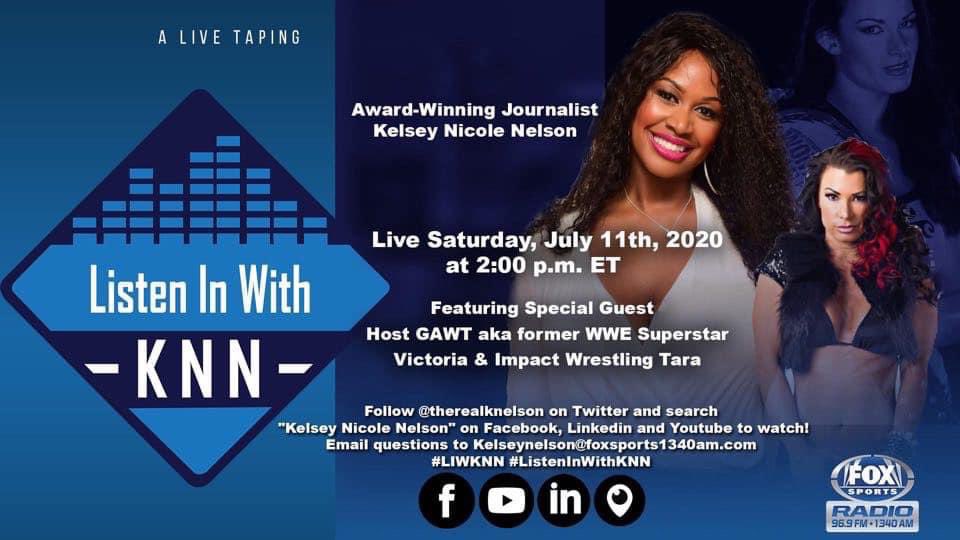 On the latest episode of Listen In With KNN on Fox Sports 1340AM, host Kelsey Nicole Nelson welcomed former WWE Superstar and host of Grown Ass Women TV (GAWTV) Lisa Marie Varon to the show. She was known as Victoria on WWE and Tara on Total Nonstop Action Wrestling (TNA).

Speaking of her journey, Varon started off teaching aerobics until she hurt her joints. As a result she got into lifting weights and her body changed quickly.

“A guy spotted me and went, have you ever thought about competing and I thought, is he hitting on me? I got ready for the bodybuilding competition in 30 days and won as a middleweight,” she said.

Varon competed in some fitness competitions and got her International Federation of BodyBuilders (IFBB) Professional Fitness Card. She sent tape of her work to the World Wrestling Entertainment (WWE) through the advice of wrestler Chyna. One day she got a call from WWE wrestler Kevin Kelly and was impressed with her tryout tape. He offered Varon a tryout despite her lack of wrestling experience. To prepare for her tryout, she trained at a pro wrestling company called Ultimate Pro Wrestling in California.

Then she was hired by the WWE at the age of 30 and made her debut as one of The Godfather’s hoes.

“That’s how I got my foot in the door. It was the funnest and easiest gig. You just get the crowd and everyone loved the Godfather girls,” she said.

Varon had some female wrestlers that she looked up to that paved the way for her to be successful.

“I definitely would say Fabulous Moolah, Mae Young, Chyna, Ivory and Madusa. When I first got into wrestling (Ivory) took me under her wing and taught me the ropes.”

Varon became a two-time WWE Women’s champion and a five-time TNA Women’s Knockout champion. Despite her accolades, she faced challenges as a woman inside the ring.

“It’s not an easy job when people insult what we do. It’s a craft whether you have it or not. The IT-factor is part of it too. You have to have it all and it’s scary,” Varon described. “I was so insecure and every weekend after my match if I didn’t get a thumbs up, I would think I’m getting fired. You come home and you dwell on it especially when you’re a perfectionist about everything.”

With some trials and tribulations, she’s hopeful for the WWE’s future as there has been some gradual change with more women participating in the sport.

“The girls have their own pay-per-view on WWE and it’s great. The respect from the male wrestlers and the male fans are giving us shoutouts,” she said. “Wrestling fans are super dedicated and super loyal and stick by your side through thick and thin. It’s very flattering.”

Varon’s wrestling career would lead to hosting a web series on YouTube called Grown Ass Woman TV and it has been a learning experience for her.

“We had bullet points to hit on something and have a fan question. We are very fan interactive and encourage them to ask real life questions like what’s your favorite breakfast?,” she said. “It’s so much fun and we’re learning as we go. A lot of people are reaching out to us wanting to be a guest on the show.”

She gave some encouraging advice to those who dream of being a wrestler one day.

“Never be so insulting to yourself. If you want something, you have to go get it and don’t rely on somebody else. It’s your responsibility.”