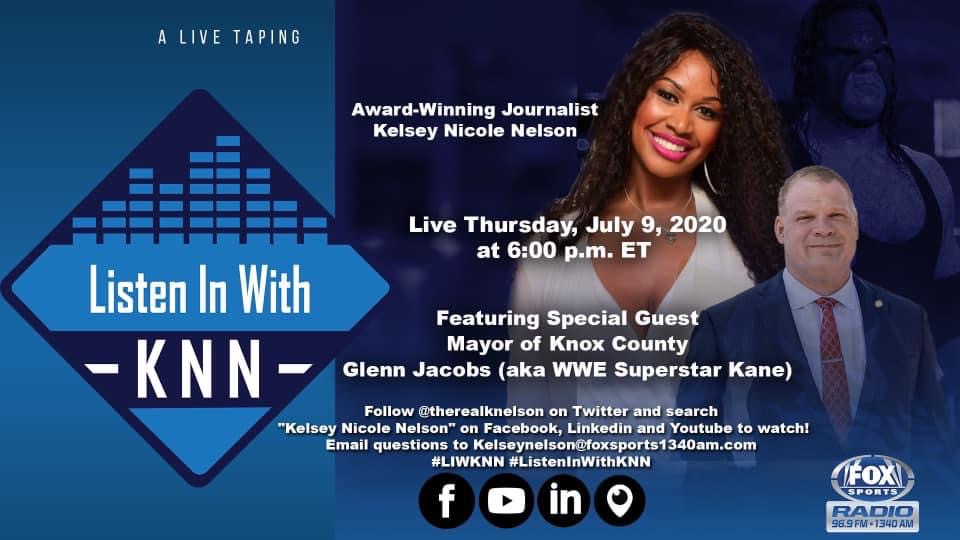 On the latest episode of Listen In With KNN on Fox Sports 1340AM, host Kelsey Nicole Nelson welcomed the Mayor of Knox County, Tennessee Glenn Jacobs who was also known as World Wrestling Entertainment (WWE) Superstar Kane to the show. He was a three time world champion in the WWE and a 12-time World Tag Team champion.

Speaking of his wrestling career, Jacobs had some of his most notable moments inside the ring.

“My favorite match was against Steve Austin at King of the Ring in Pittsburgh, Pennsylvania in 1998 in which I won my first world championship,” he said. “My next favorite would be my first Wrestlemania match against Undertaker that same year in Boston and that was the culmination of the storyline between Undertaker and Kane. The next one was the Inferno match in Greensboro, North Carolina against Undertaker again.”

His journey led him to Knox County, Tennessee where he and his family have been living in for 25 years. Jacobs became the Mayor of Knox County in 2018 and his mission for the county is to be the best place to live, work and raise a family.

“I live in Knox County because I think it’s the greatest place in the world to live. When I was with WWE, I was traveling every week to a different part of the world. So I wasn’t geographically confined as to where I can live by my job,” said the Knox County mayor. “We have lots of outdoor recreational opportunities and we’re just scratching the surface.”

In addition to his political career, Jacobs has been volunteering at the Knox Mobile Meals program to uplift the community delivering meals five days a week to residents who are at least 60 years old.

“They do this wonderful work. I’ve been working with them ever since I’ve been Mayor for over a year Throughout this episode of COVID-19, they’ve had to alter their deliveries. They put the safety and health of the folks that they serve as a priority.”

In relation to COVD-19, he recently voted against the COVID-19 mask mandate for people inside public buildings. As a member of the Knox County Board of Health, his decision was based on public policy.

“I don’t like the government mandating a lot of things. It’s very hard to enforce as we’re wasting resources for law enforcement and other government agencies,” Jacobs said. “As far as masks, I think the people should do everything they possibly can to protect themselves and their neighbors. When you’re out in public, maintain physical distance.”

In spite of these circumstances, he encourages people to have hope.

“This is an unprecedented time in our nation’s history. I think we can all exercise more kindness and respect towards one another. We can come together and we’re going to get through all of this. We can be better because of it and we have to keep that in mind.”