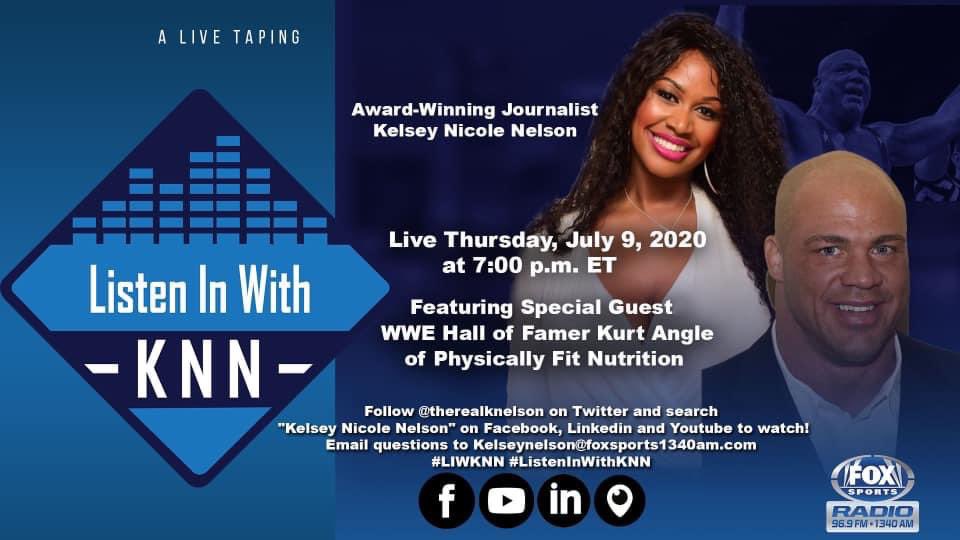 On the latest episode of Listen In With KNN on Fox Sports 1340AM, host Kelsey Nicole Nelson welcomed in World Wrestling Entertainment (WWE) Hall of Famer Kurt Angle of Physically Fit Nutrition to the show. He was an Olympic gold medalist at the 1996 Summer Olympics and was inducted into the International Sports Hall of Fame in 2016.

Angle’s biggest strength as a wrestler was his consistency and performed every night like it was his last.

“I had more of the best matches night after night. My top three matches are Undertaker No Way Out in 2006, Shawn Michaels WrestleMania 21. My best match in my whole entire career against Chris Benoit at the Royal Rumble in 2003,” he said.

Speaking of his athletic career, the Pennsylvania native had a tryout with the Pittsburgh Steelers in 1994 after taking a short break from Amateur wrestling. Despite not making the team, he still supports the Steelers.

“Football was the funnest sport for me and I’m a big Ben Roethlisberger fan. The franchise has done an incredible job the last 60 years,” said Angle. “They’ve been one of the best programs out of anybody. Them, New England Patriots and the Dallas Cowboys are the top three most successful teams.”

As a result of his entertaining career, Angle became an actor and has done at least 15 movies and has a couple of projects coming up. Recently, he was in a movie called Chasing Molly.

“It’s a really funny movie. Shelley Pack did an incredible job. She casted the right people and it was a lot of fun to do,” he said.

Later on, he started his company 12 years ago called BarnDad that later became Physically Fit Nutrition. It’s a supplement company which specializes in proteins and fibers and their motto is “Healthy People – Healthy Planet.” Physically Fit Nutrition had its good and bad results and that was in spite of Angle not being around because of his WWE career.

“The guys do a great job. I turned down three different jobs from WWE and I knew I had to be home for this. I need to make this work before I can worry about anything else,” he said.

The WWE legend is a father of six kids and two of them were adopted. One of his adopted kids almost drowned as he was in a race with Angle’s nephew to swim to the rock.

“My son kept going and swam so hard that when he got to the rock he couldn’t swim anymore. The lifeguard and sheriff came and said you’re not allowed to be on the rocks. The lifeguard went out to grab him and brought him back and thank god he was safe,” he said.

As COVID-19 has had a huge impact on the sports and education landscape, the ex-wrestler wants the best solution for his kids.

“If we’re smart about how we’re doing this, we should be okay. We want our kids to be healthy and go to school and learn and be a part of the social community that we need everyday.”