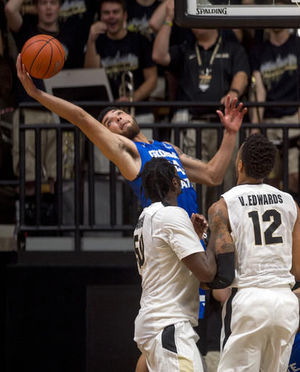 FARMVILLE, Va. – With his fellow frontcourt mate Damarion Geter sidelined due to early foul trouble, Longwood forward Khris Lane had the paint all to himself.

Attacking the boards with his trademark physicality, the 6-6, 245-pound Lane grabbed 14 rebounds and poured in a career-high 26 points to power the Lancers (1-2) to an 87-74 rout of Division II Salem International Friday evening in Willett Hall.

As part of his fourth career double-double, Lane finished with twice as many rebounds as any other player on the floor and posted the highest single-game rebound total in the Big South this season. His 14 boards ranked as the second most of his career, trailing only the Longwood Division I-record tying 20 he grabbed against Randolph in his Lancer debut on Nov. 13, 2015.

The 26 points, meanwhile, surpassed his previous career high of 18 and marked Longwood’s first 20-point game and first double-double of the season.

“I wasn’t really too worried about points tonight,” he said. “My teammates just found me. I was really just focused on rebounding.”

Lane almost got that double-double in the first half with nine points and eight rebounds before erupting for 15 points and six more boards after halftime to help the Lancers pull away to their first win of the season. He sank a career-best 12-of-15 shots from the floor, including all seven he took in the second half.

Of his 12 made field goals, one came from long range while eight others came inside the paint, including a pair of putbacks.

“I know I can be a dominant rebounder,” said Lane, who now leads Longwood in both scoring and rebounding three games into the season. “I really made it a point to come out here and get as many rebounds as I could. My points were really just my teammates finding me on a lot of fast-breaks and dumpoffs.”

Lane did the bulk of his damage under the basket to lead a dominant charge in which Longwood outscored Salem International 48-26 in the paint and outrebounded the Tigers 39-32. Nineteen of Longwood’s points came on second-chance opportunities, while a season-high 12 more came on the fastbreak.

“Our main focus is just to be a good shot-selection team that shares the ball,” Lane said. “We say a lot of ‘one more,’ making that extra pass, finding the open man. When you move the ball around like that, you’ll have a lot of guys in double digits.”

The Lancers moved the ball around to the tune of 21 assists on 31 made field goals, a team-high seven of which came from combo guard Isaiah Walton. Ten of Lane’s 12 field goals had an accompanying assist, including five from Walton.

Walton, who finished with 12 points, four rebounds and a team-high three steals, joined Lane, senior guard Darrion Allen and redshirt sophomore guard Bryan Gee in double-figure scoring. Allen finished with 16 points, 13 of which came in the game’s first 5:07 to lift Longwood to a 15-4 lead, while Gee turned in his first career double-digit scoring game with 10 points on 2-of-3 shooting from the field and 6-of-7 from the line.

The offensive performance overshadowed Longwood’s work on the defensive end where the Lancers forced Salem International into 18 turnovers to overcome 18 points from Tigers forward Saquan Epps and 17 points from swingman Julius Farrow.

“I thought the pressure really affected them,” Gee said. “I thought we got them out of their system. We picked up where we left off at Stephen F. Austin in being able to pressure guys and get them out of their comfort zone. We made them miss some key shots and really took advantage on the other end, and that was a good effort for our team.”

Longwood turned those 18 turnovers into 28 points used the transition game to break up a series of second-half surges from the Tigers. Salem International first-year head coach Adam Williams, who just one season ago was on Gee’s bench as an assistant coach at Longwood, turned his team around near the end of the first half and cut a 25-point deficit to single digits.

However, a 7-0 run was the largest the Tigers could muster in the second half as the Lancers went the remainder of the half without giving up more than two straight field goals.

With their first win under their belt, the Lancers will hit the road again next week for a Nov. 23 showdown at Saint Francis in Loretto, Pa. That game will air live on WVHL 92.9 Kickin’ Country FM in Farmville, Va.