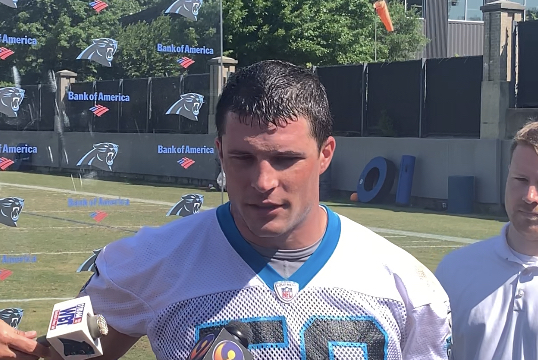 With the departures of Panthers legends Julius Peppers, Thomas Davis, and Ryan Kalil, things were expected to be a little different for the Carolina Panthers this upcoming season. Throw in the new indoor practice facility that is under construction as well as a new-look defense and it’s apparent that times, they are a’changing.

Tuesday kicked off the second week of OTAs, or organized team activities, for the Panthers and Luke Kuechly was right in the middle of things – literally. The middle linebacker is the most prolific tackler in the NFL and the central part of a Panthers defense that will be looking to find its identity with the absence of two of the franchise’s most vocal and productive leaders in Davis and Peppers. With the Panthers moving from a 4-3 defensive scheme to what head coach Ron Rivera referred to as a “little bit of a 3-4 base”, Kuechly will remain right in the middle of it all.

“I mean it’s stupid to think that he’s not going to fit,” Rivera said. “We’re not really disrupting anything he does.”

In the new scheme, Kuechly and fifth-year linebacker Shaq Thompson will split the middle of the field. With the addition of hybrid players Brian Burns and Christian Miller by way of the draft, it was evident that the Panthers were looking to add new defensive looks. Both are versatile players that are quick and efficient in run support but also able to drop back into coverage.

As if anyone needed any convincing on how well Kuechly would adjust, he came up with an interception on the very first play from scrimmage. In true Kuechly fashion, the Boston College product deflected from discussing his turnover when speaking with media following the session. Instead Kuechly chose to focus on the defensive unit as a whole – an area that was porous at times during Carolina’s 7-game losing skid.

“Going into this season, I think we’ve done a good job with this. This year we’ve got some guys that can run off the edge. Marquis (Haynes) has done a good job this offseason. Bruce (Irvin) has been around and done it at a high level and then Brian (Burns) has done a really good job. So those are some new guys in the fold at new positions that have been doing a really good job so far. The guys on the back end have done extremely well too.”

Kuechly adds that there has been good production in what he calls a “pretty good start”. Both Rivera and Kuechly were quick to dispel the notion that three-man fronts would limit penetration and consequently diminish Kuechly’s ability to roam. Rivera said that there will be “space eaters” while Kuechly added, “It’s good. We’ve still got plenty of guys in front of us to penetrate.”