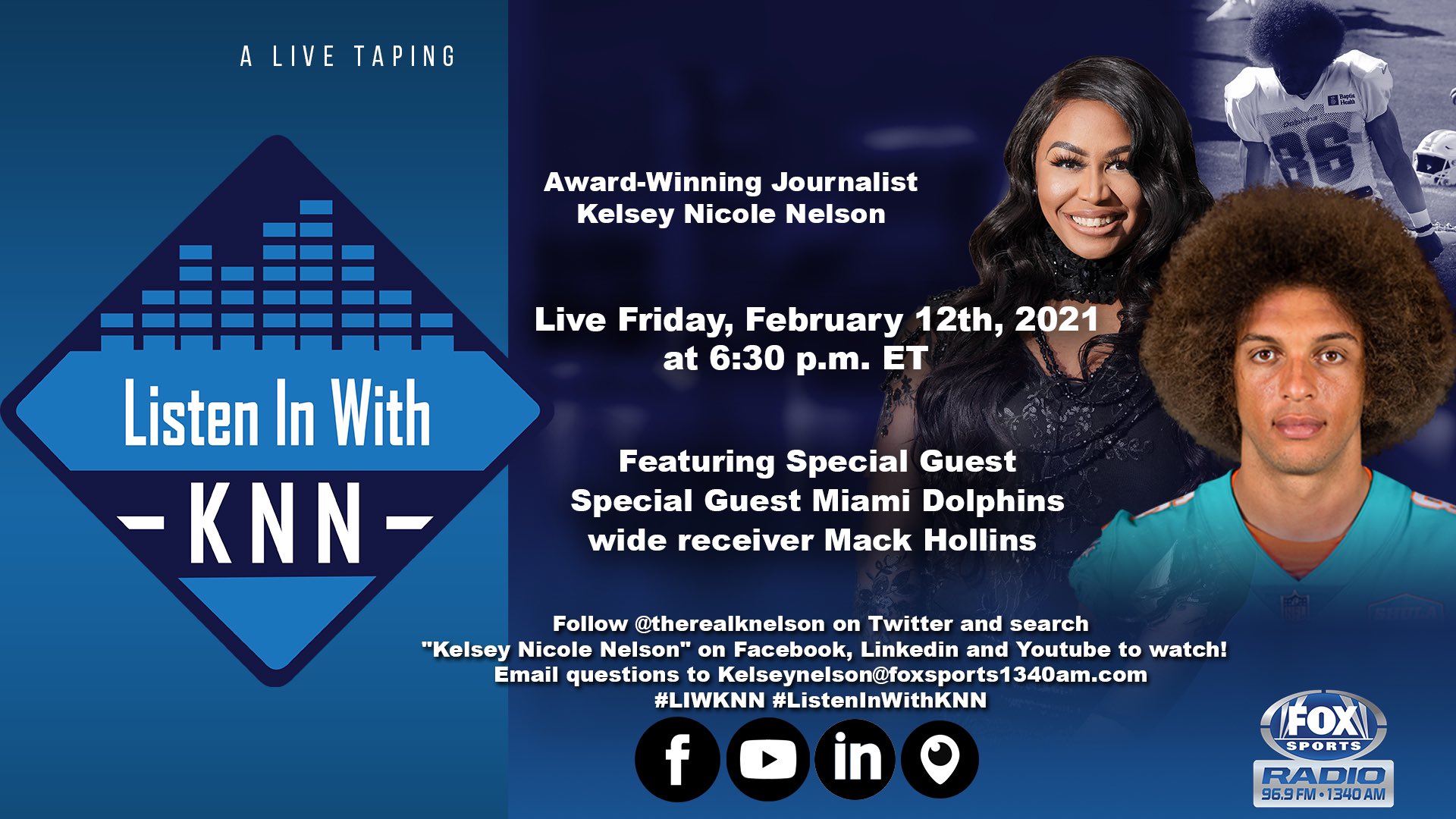 On the latest episode of Listen In With KNN on Fox Sports 1340AM, host Kelsey Nicole Nelson welcomed Miami Dolphins wide receiver Mack Hollins to the show.

Speaking of his football journey, he grew up in Rockville, Maryland with his two brothers and his dad, who played football in college and in the NFL. Hollins played all types of sports but found his true passion in football.

“I was the one that went down the football path the most. I enjoy a lot of sports and the more you play, the better you get at your specific sport because you can take a lot from different areas and pull it all in. Football is what’s taken me the furthest and I’m fortunate enough to be in the NFL,” he said.

Hollins played football at Wootton High School but didn’t get any scholarships. As a result, Hollins attended Fork Union Military Academy, which is a college preparatory school from August to December 2012. There, he would team up with future NFL players in Michael Thomas and Cardale Jones as it was a prep year to help him become a better player and to get noticed by colleges.

“A lot of players had already got scholarships and their coaches didn’t want them to redshirt. So, they sent them there for a semester or they needed the grades but I just needed the recruiting. Our team was pretty stacked and to go from Wootton to there was pretty crazy. I ended up not even getting recruited out of there and ended up sending out hundreds of emails to coaches,” Hollins said.

Luckily, he accepted an opportunity to be a walk-on on the University of North Carolina football team. While at UNC, Hollins was the special teams captain for all four years and became one of the greatest receivers in school history with 81 receptions for 1,667 yards and 20 touchdowns.

Hollins’ NFL dream came true in 2017 when the Philadelphia Eagles selected the six foot four wideout in the fourth round. He was upstairs in his house and was five to 10 minutes aways from missing the call from the team just as he got out of the shower.

He would get to experience joy in his first year when the Eagles won their first Super Bowl title in franchise history.

“I remember Torrey Smith telling me how different it was because he won one in Baltimore when he was closer to age 27 and won in Philly when he was older. At the time, I was like, ‘yeah whatever Torrey.’ As a player, I was so young and did it my first year and think it’s always going to happen but I haven’t been back since,” Hollins said. “Now that I look at it, it’s like, ‘what an amazing experience that was because I may never get it again.’”

After spending his first three seasons in the City of Brotherly Love, he joined the Miami Dolphins to try to bring that championship mindset. However, it became a challenge as the 2020 NFL season was impacted by COVID-19 and as a result, the Dolphins were at half capacity at Hard Rock Stadium. Despite the circumstances, the team finished with a 10-6 record as they were one win away from the postseason. Hollins believes this could be a stepping stone to bringing a championship in South Beach.

“When you have a young team, you don’t really understand what regular season football is and what playoff season football is. We learned a lot even though we didn’t make the playoffs. That last game versus the Bills didn’t go the way we wanted it to go in any aspect but it taught guys a lot about what it takes to be an elite team and a playoff contender in this league,” he said. “I think the younger guys will have learned that and will carry it over to next and be able to emphasize winning early and taking care of business.”