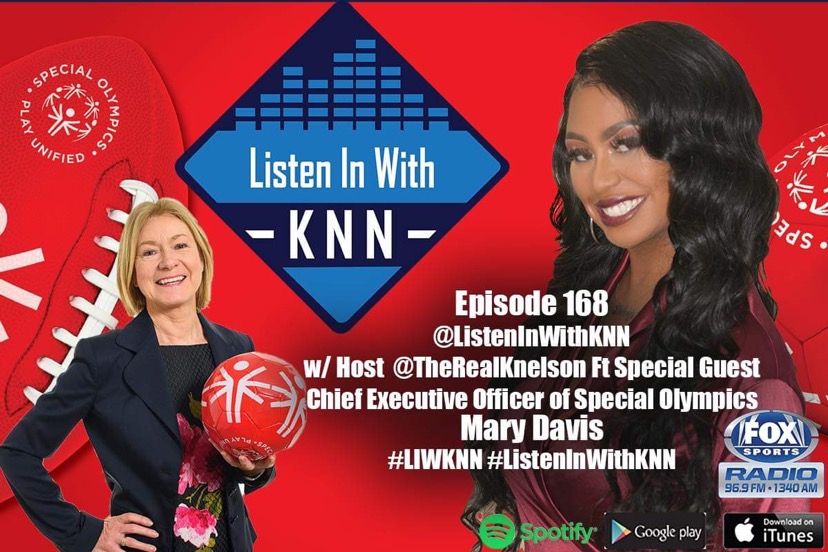 On the 168th episode of Listen In With KNN on Fox Sports 1340AM, host Kelsey Nicole Nelson welcomed Chief Executive Officer of Special Olympics International Mary Davis to the show.

She started out her career as a teacher at St. Michael’s House in Ireland, which is an organization for people with intellectual disabilities. During her time as a teacher, Davis recognized that there wasn’t a Special Olympics program in Ireland and made the decision to start one.

“I am very passionate about the abilities and talents of people with intellectual disabilities and the need to showcase those. I could see once we had the training materials, our athletes were fast learners. They dig so deep to be the best they could be brought out the best in the rest of us. We continued to develop the program in Ireland and it went from strength to strength and it’s one of the strongest programs in the world,” she said.

As a result of her passion, Davis was the driving force in bringing the Special Olympics World Summer Games to Ireland in 2003. She was the CEO of the Organizing Committee and recruited 30,000 volunteers to help with the event. It was a great opportunity for the country to highlight capabilities of the Special Olympians that came from 165 countries.

“What we really wanted to do was to transform attitudes about the whole area of intellectual disabilities and that’s what those games did. We had an amazing opening ceremony attended by 82,000 people including Nelson Mandela, Muhammad Ali, Bono and U2. The whole plan for doing it was to bring more awareness to change attitudes and to ensure the inclusion of people going forward,” Davis said. “That’s exactly what those games did and it helped all over the world that experience that was created in Ireland impacted in our countries as well.”

She was awarded with Ireland’s Person of the Year in that same year for her work on the World Summer Games. This award meant a lot to Davis as it was a reflection of the people who contributed to make the event successful.

“The Games would have never been successful without the 30,000 volunteers that got involved and we were able to mobilize. The support that we got from governments and our corporate partners like Coca Cola, Bank of America and Toyota that helped us promote the games around the world, which was very important. That award was an acknowledgement to all of them and I was proud to accept it on behalf of everyone,” she said.

In 2022, the Special Olympics will have the World Winter Games in Kazan, Russia from January 22nd to 28th as close to 2,000 athletes from 111 countries around the world will participate in the Winter Games.

“We hope that the games will create an environment to showcase the talents and abilities of people with intellectual disabilities. The other big thing is that we hope it will create an environment where every single person in Russia and around the world will understand differences and understand that our athletes can be as successful as anyone else when they have the support systems in place. They should and can be an inclusive part of every community,” said Davis. “It’s about people opening their minds to the abilities of people with intellectual disabilities and that they’re included in other aspects of life as well.”

Kazan was chosen because of Russia’s huge Special Olympics program with over 130,000 athletes participating from all of its different regions.

“From a Special Olympics perspective, we’ve always had an interest in hosting large games in Russia. We want to put a lot of emphasis on that in a country like Russia where many people with intellectual disabilities are still in institutions. We want to work with those institutions and the various agencies to ensure that these people are included and transition from institutions to community type of living,” she said. “We’re very confident that we’ll send a strong message of inclusion.”