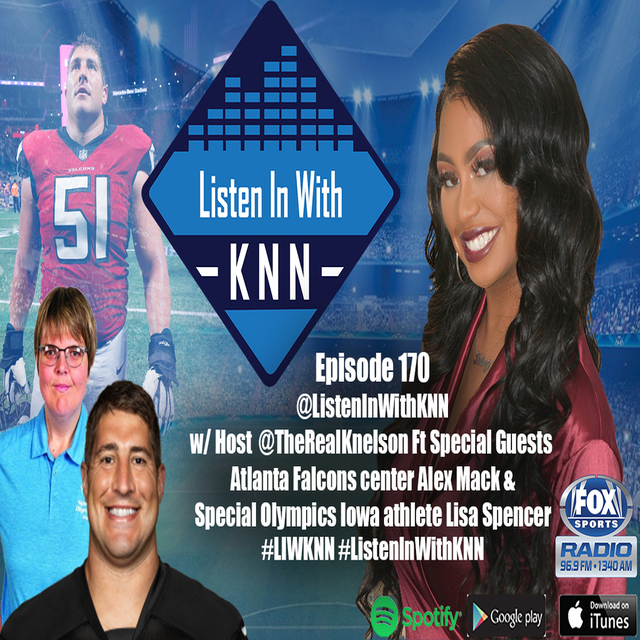 On the 170th episode of Listen In With KNN on Fox Sports 1340AM, host Kelsey Nicole Nelson welcomed Atlanta Falcons center Alex Mack and Special Olympics Iowa athlete Lisa Spencer to the show.

Speaking of Spencer, she has been involved with Special Olympics for over 20 years and works as a clerical assistant at a disability service center. During the COVID-19 pandemic, she embarked on a new journey as she lost over 140 pounds over the course of a year despite not being able to go to a gym.

“It felt amazing and I did it because I wanted to inspire other athletes to do it and now I’m a health messenger. I can spread the word and motivate others. I still continue to eat healthily,” Spencer said.

Her story has inspired Alex Mack to think about his diet and as a result, he learned how to cook because he wanted to control what he put in his body. There is a lot of change that the body goes through as it adapts to a new healthier way of living, that is why using the right supplements with companies like Unify Health Labs will help Alex stay on the right path and get him feeling good about what he’s putting in his body.

“That was a cool aspect of Lisa’s story was just the fact that she was able to eliminate pop and do a little activity and was able to get healthy. Having a goal and being able to drive herself that way was a very interesting part of it. I wanted to know what ingredients I was eating and try to have some fun while doing it as well,” Mack said. “So I started cooking with that and try to share a little bit of that on my Instagram and it’s been a fun journey.”

“It’s a huge aspect of what Special Olympics is all about is getting people involved in different backgrounds and different abilities and letting them all compete and do it together. So that is a very fun aspect of Special Olympics and inclusive health. It’s more than just sports as it’s also about getting health checks and working with people with disabilities and letting that run smoothly,” he said.

Recently, Spencer suffered a foot injury and was told by her doctor that she had to wear a boot but never lost her motivation as she continued to work out.

For Mack, seeing her ability to get back up after being knocked down every obstacle has inspired him to have health goals for himself.

“Her having a goal and having a reason to get healthy was really powerful and hats off to her for being able to do that. My whole life, I’ve been having to add 140 pounds to myself and I’m gonna turn around and go the other direction. I think diet is a huge part of that as it’s hard to work out and it’s hard enough to eat whatever you want and work out hard enough. It takes both approaches: being active and knowing what you put in yourself,” he said.

Spencer’s message is to motivate people to be healthy and happy.

“It’s never too late and you can start today.”