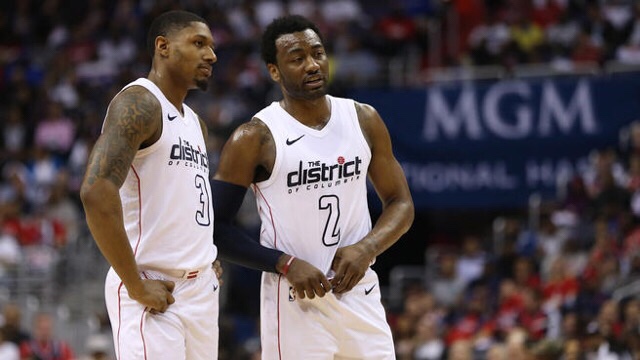 WASHINGTON- And that’s it folks. After a devastating 102-92 loss at home, the Washington Wizards season was snatched by the number one seeded Toronto Raptors. Now I could go on about the mere fact that the Wizards did have the manpower to protect homecourt and have the possibility of beating Toronto on their court in Game 7 but, I’d rather get straight to the point.

The All-Star duo Kyle Lowry and DeMar DeRozan won, the Wizards lost and we’re one more day closer to the 2019 season. But things certainly have to change for the Wizards before tip.

Both Bradley Beal, John Wall and Otto Porter Jr., who missed Game 6 for a leg procedure, are under max deals next season. But the Wizards have to consider making adjustments at their bigs, which has been their ultimate problem all season.

When speaking on his future, Marcin Gortat said that he “has a lot in the tank” and wants to return to the center position for the Wizards.

Wall however believes that the team needs to move in a more athletic direction at their big position. “It’s pretty obvious. I don’t need to point it out. I think the way the league is going, you need athletic bigs, you need scoring off the bench, you need all of those types of things,” Wall said. “We don’t really have an athletic big.”

Coach Brooks also spoke on the state of the Wizards and said, “Do we need to improve some things? Absolutely. Can we do it within the group? I’m pretty confident that we can. We got two all-stars on our team. Just watching John and Brad’s growth not only with themselves but with their teammates have improved.”

The Wizards have improved but getting knocked out in the first round of the playoffs is nothing to be happy about.

“All we can do is tip our hat off to them. They are a great team. I said it earlier in a press conference, it doesn’t matter what seed you are, you gotta go out and compete regardless of who you are playing and who is on the floor.”

Now that the season is over for the Wizards, all eyes are on the front office to make roster moves for this championship parched team. “We added some pieces to help us out at times …but at the same time front office people need to figure out what really fits with the team,” Wall said when speaking on the current construction of his team.

The franchise player said it best, Ernie Grunfield and the front office have a lot of work to do in order to prevent another first round disappointing season from occurring yet again.