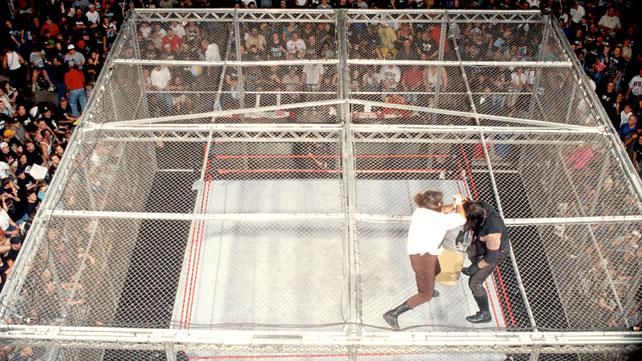 Firstly, who won the 1998 King of the Ring tournament? Who defended the then WWF Title at the event? Only a true wrestling fan will know those answers. The main reason why those questions are hard to answer is that of one era, two men, and one match that has shaped the careers of many. Mankind vs The Undertaker in Hell in a Cell during the attitude era changed the wrestling world.

That was right after the Undertaker threw Mankind from the top of the Cell unto the Spanish announcer’s table. Mankind took a 16-foot fall. This one video is played constantly on highlight reels on a daily basis. So legendary, it was even played in the WWE’s opening program credits for years. The match was paused, Foley was wheeled to the back and he got back up. The whole arena was shocked. Both men went back on top of the cage. A few seconds later, Jim Ross said this: “Good God… Good, God! Will somebody stop the damn match? Enough’s enough!”. That was after when Mankind was choke slammed through the top of the cage by the Undertaker. The original plan was for the panel mesh to cave in a little bit but the previous action earlier in the match caused the panel to give way after the chokeslam

Of course, that part was not scripted at all. Everyone had to stay in Character, even the Undertaker. Mankind was knocked unconscious for a short period of time. The fall was so hard, Foley’s body made a deep dent in the ring. The arena was unglued but a little concerned at the same time. When Foley got up, his appearance was the most gruesome and famous picture in WWE history. He was bleeding through his nose and mouth, with a tooth hanging in his nose. Despite the damage, Mankind had a smile on his face; adding to his already extreme legacy.

Taker added a chokeslam on thumbtacks as the match ended after that. Three main bumps created the most memorable minutes in WWE history.

Firstly, this whole match never would have finished in 2018. WWE is now a publicly traded company with many partnerships that effects their content. Another thing, the WWE is now PG. Yes, there’s been violent matches but it does not compare to the few bumps that occurred during this match. When someone bleeds now, a whole medical team runs to the ring to stop it, that was not the case back then. Yes, the medical presence was there during the match but not that much of a medical presence was really there during that time in WWE history like it is now. Most WWE officials won’t expect anyone to take the first few bumps in that match if it was proposed in 2018. Even then it was a little crazy. The Undertaker did not want to even attempt the bump when first considered. So for hardcore fans, they cherish this moment because it will never happen in this manner again.

In terms of the Hell in the Cell legacy, this was the third match in the match type. The first had Shawn Michaels get beat to a pulp. Kane also debuted in that Match as well. This third match just added to the legacy that the match started. The 6th HIAC Match had Triple H and Mankind fight to an instant classic. The 7th match had the Rock, Stone Cold, Taker, Angle, Rikishi, and Triple H…all in the same match. The Undertaker threw Rikishi off the Cell as well in that match as well. From a booking perspective, the HIAC match legacy started strong through its first few, matches. Although the match got overused by the late 2000’s, this match added to the HIAC legacy early on in its history.

For the competitors in the match, their Careers changed forever. The Undertaker’s level of brutality was most defiantly increased after this match. He could’ve easily gone on and defeated Austin for the WWF Title at SummerSlam that year just based on his level of dangerousness displayed during this match. Mick Foley truly cemented his legacy that night in Pittsburgh. He has to watch a tape to truly even remember what happened on that night. It’s one of his favorite matches mot because of the pain, but because f the legacy it leaves.

No Hell in the Cell match will ever compare to this one.