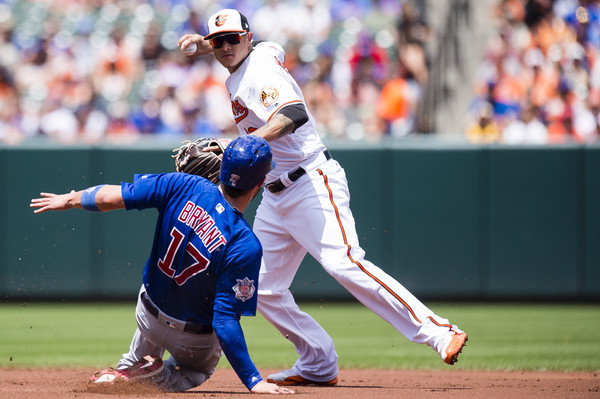 Baltimore Orioles third baseman Manny Machado has been the talk of MLB Hot Stove rumors. One team that he has been linked with are the Chicago Cubs.

To discuss the possibility of a trade with the Cubs, Chris Loechel of RO Baseball, has answered some questions.

Kyle Andrews: There have been talks about Machado playing for the Cubs, but who would they have to give up to acquire him?

Chris Loechel: The conversation likely starts with Addison Russell, a young, proven SS with 4 years of control ahead of him.  From there, Baltimore will seek pitching and will probably want left-handed swing-man Mike Montgomery to be part of the deal.  If that’s not a show-stopper for the Cubs, I could see a high-upside live arm years from the majors rounding out the deal.
KJA: Would Machado play shortstop or third base?
CL: I don’t see the Cubs making this trade if they don’t intend on primarily slotting Machado in at SS.  It simply would create as much chaos as it would solve.  Knowing Maddon and his affinity for positional flexibility, I could definitely see a lineup featuring [Javier] Baez at SS, Machado at 3B, and [Kris] Bryant in the OF against left handed pitching, but most days would see Machado at short.
If Machado plays third base, will Kris Bryant is now the starting left fielder?
To my point above, I don’t think Machado at 3B works in Chicago because of the over-loaded outfield, as well as the fact that we just traded away Addison Russell.  If it were to happen, I think you’d see Bryant split his time between LF and RF, with Heyward taking some starts in CF and riding pine for some as well.
KJA: What does this mean for current left fielder Kyle Schwarber? Does he become expendable in a trade?
CL: Schwarber and Ian Happ have been the two most logical trade pieces for the Cubs to float to the market given their surplus of outfield candidates.  I strongly get the sense that the Cubs like Schwarber well above and beyond the best offer they could get for moving him as they still see him as every bit the impact bat that [Anthony] Rizzo and Bryant have become.  So, I don’t see Schwarber going anywhere. This is the primary reason that I don’t see this move as possible unless Machado is primarily a SS in Chicago.

KJA: There have also been talks of shortstop Addison Russell and left-handed starter Mike Montgomery being packaged together for Machado. What could they immediately offer to Baltimore?
CL: With Addison Russell, you’re getting a former top prospect that has established himself as a very good defender at SS with the ability to pop 20 homers over the course of a season.  He’s under-performed offensive expectations to this point in his career which has some believing that there’s room for the triple slash numbers to tick up across the board.  Baltimore would be able to take over his development and see how close to that ceiling they can get within their 4 years of contact control.
Mike Montgomery has been excellent out of the bullpen and capable as a starter since the Cubs acquired him from Seattle.  Scouts question his ability to transition into a locked-in, mid-rotation arm or better given his intermittent command issues, but he certainly has the pitch arsenal to give it a try.  He may be most valuable as a swing-man, as he’s been deployed in Chicago, especially when you consider a potential move to the AL East.
(Photo Credit: Patrick McDermott/Getty Images North America)
Tweet