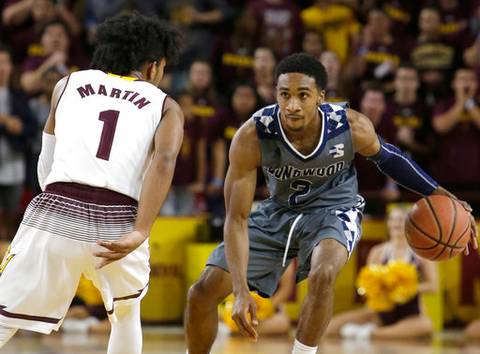 TEMPE, Ariz. – Led by 20 points from the Pac-12’s third-leading scorer Tra Holder, third-ranked Arizona State (11-0) unleashed the nation’s No. 7 scoring offense in the second half to pull away from Longwood 95-61 Tuesday evening at ASU Wells Fargo Arena.

Arizona State (11-0) entered the game as one of only four remaining unbeaten teams in the country and showcased that pedigree with a furious second half to stymie a Longwood team that went blow-for-blow with the Sun Devils in the first half.

Despite being down two starters, the injury-raved Lancers (3-9) kept pace with through the first 20 minutes of the game, allowing Arizona State a slim 35-30 halftime lead. That all changed after halftime, however, as the Sun Devils deployed a stifling full-court press and sped up the tempo in transition to outscore Longwood 60-31 the rest of the way.

“I thought that we dictated the tempo in the first half because of the zone we played,” said Longwood head coach Jayson Gee. “One of the challenges to our guys right now is we have to play a tough 2-3 zone. I felt like that was going to be the defense that we needed to employ to get the tempo in our favor. You couldn’t play this team, as we saw in the second half, at that tempo. I mean they are just too explosive.”

Holder scored 10 of his 20 points during that second-half surge to finish as one of Arizona State’s five double-digit scorers. Kodi Justice poured in 18, and De’Quon Lake (16 points), Remy Martin (13) and Mickey Mitchell (12) all finished in double digits off the bench.

Arizona State’s second-half rally featured a game-breaking 16-1 run that allowed Arizona State to overcome a 12-point first half from Longwood redshirt senior B.K. Ashe, who hit three of his first four three-point attempts. His production kept Longwood in the game long enough to knot the score at 30-30 with 1:50 to play before the Sun Devils scored the final five points of the half.

“At the end of the day, I thought our guys really competed hard, and coach [Bobby] Hurley after the game said our kids played really hard,” said Longwood head coach Jayson Gee. “As I told our team just now, I think that is the greatest compliment you get from the opposing coach. When he shakes your hand and says ‘Your kids played hard’, I have to give them a lot of credit for that.”

Arizona State bottled up Ashe after the break, keeping the short-handed Lancers at an even greater disadvantage with injured starters Isaiah Walton and Charles Glover relegated to the bench with injuries. Freshman Kamil Chapman emerged in their place late in the game, knocking down all five of his three-pointers in the second half en route to a career-high 16 points and his second straight game as Longwood’s leading scorer.

However, the scoring of Longwood’s backcourt was not enough to overcome the 26 turnovers Arizona State forced and the 26 points they converted off those extra opportunities.

The win leaves Longwood with just one non-conference game on the schedule before the start of Big South play, which begins against Charleston Southern on Dec. 30. The final tune-up before that conference opener comes Thursday, just miles from Arizona State’s campus, when Longwood faces Grand Canyon in Phoenix.